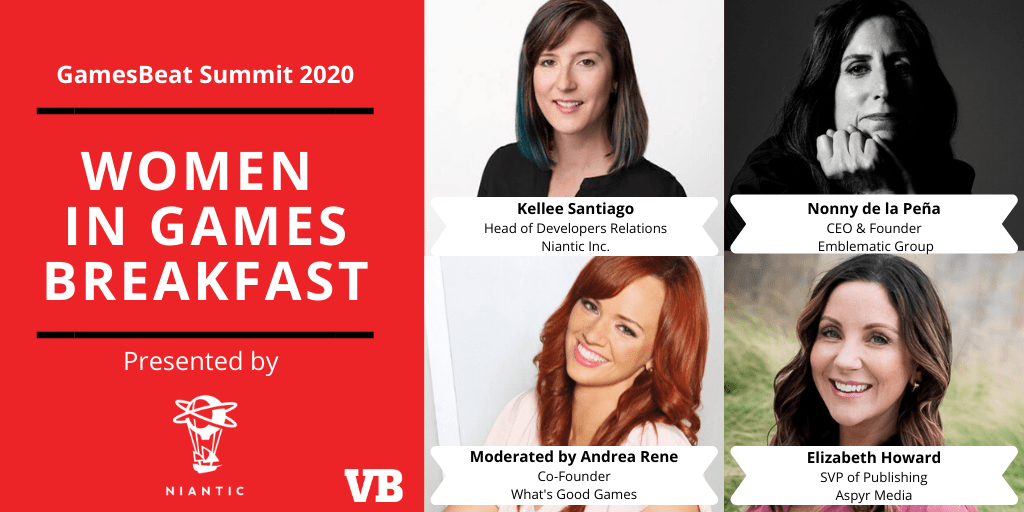 Women still only see about 2.7% of total investment funding, but the number of women developers are on the rise. At this year’s GamesBeat 2020 Digital, over 20% of attendees were women-identified, about the same ratio of women in the industry. And over 100 women-identified executives attended the second annual Women in Gaming breakfast, and the first-ever virtual breakfast.

The invitation-only panel and networking event was led by Hero Stage emcee Andrea Rene of What’s Good Gaming. Rene has been working in video games media for over a decade, and is one of the brains behind the wildly popular “What’s Good Games,” serving as head of operations and co-host, plus producer, and writer.

On the panel discussion, “Designing games and experiences: How to stay fresh while developing for new media,” Rene spoke with Kellee Santiago, Head of Developer Relations at Niantic, Nonny de la Pena, CEO of Emblematic, and Elizabeth Howard, SVP Publishing at Aspyr Media about the ways that immersive content and interactive storytelling are evolving in the video game space today.

The conversation delved into the way developers can broaden access to interactive stories, how to grow the ecosystem in a more inclusive, diverse way, creating wider audiences, how to provide tools to make it easy for everybody to make stories, and how women across the industry are working to support innovation and new entrepreneurs in the space. They spoke, too, about the effort to bring in younger voices of POC, women-identified and non-binary folk, and developers across the LGBTQ plus spectrum.

The execs also discussed the ways that women deal with online harassment and systemic discrimination and the strides they’re taking in their own companies. These are women focused on ensuring they’re mentoring women leaders, establishing supportive environments in their own companies. For example, one participant noted how important it was, as women gain positions of power in gaming companies, to ensure every person at a meeting is heard from, which is one of the day-to-day problems that can suppress women’s voices.

They shared their individual experiences in the gaming world as a group of developers who have launched their careers in a variety of gaming spaces. During the Q&A, attendees discussed their own time in the industry, the challenges they’ve faced, as well as their wins and accomplishments.

One participant noted the importance of relentlessly advocating for your own advancement, noting every raise and every promotion she received was a result of speaking up on her own behalf. There was broad consensus that women must take ownership of their own skills, as well as their achievements.

The round table turned to a discussion of the path forward for the gaming industry, and how the women at the breakfast can take those lessons back into their respective companies. At the end of the breakfast, attendees were invited to the Slack channel to continue the conversation virtually, in a world where connections are more important than ever. It’s about working with other women across the network to provide support, mentorship, share strategy – and even eventually take over the gaming industry!
Sponsored Post Disclaimer