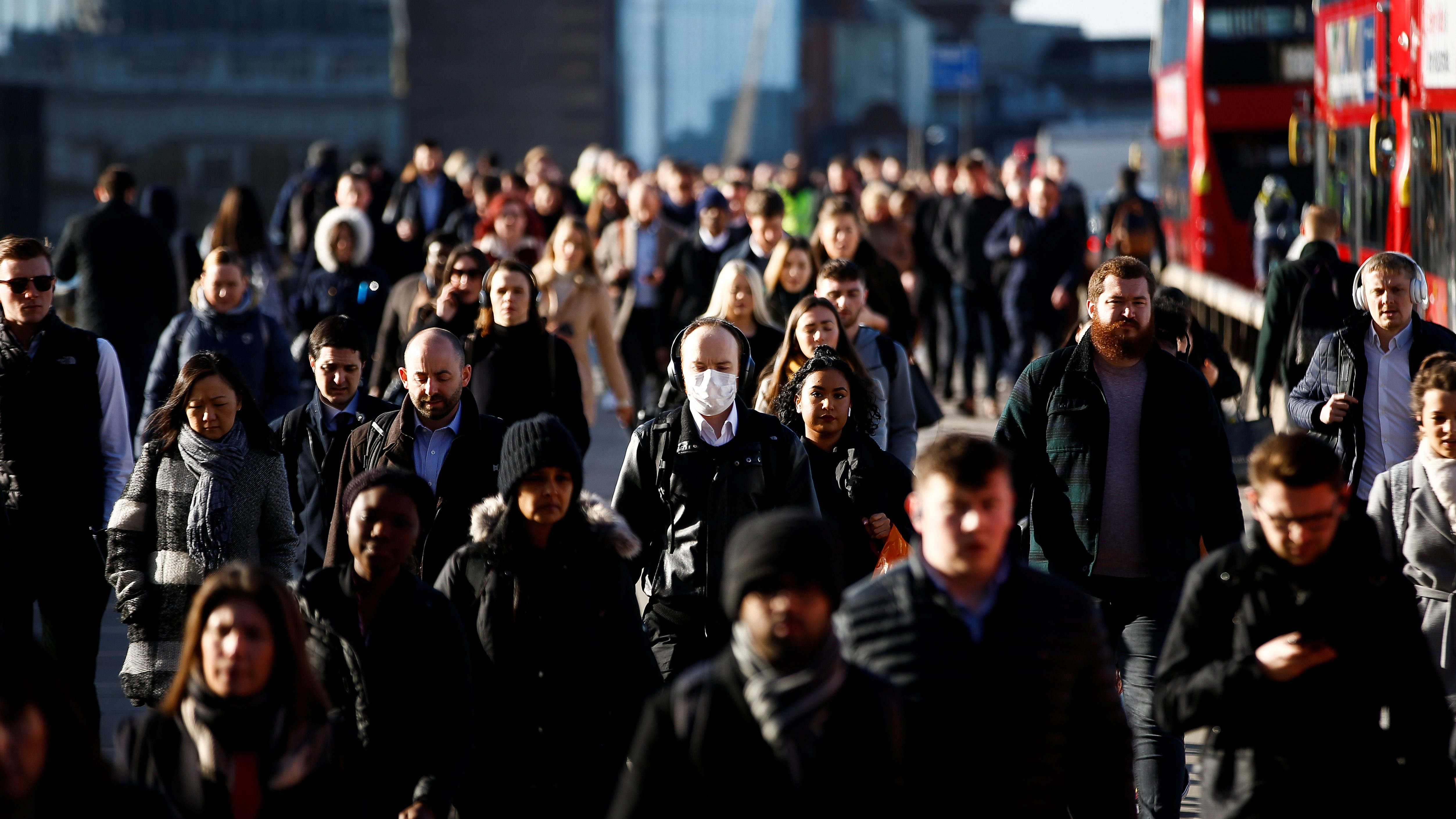 On Jan. 24, I got a text from the UK’s National Health Service telling me if I had returned from Wuhan and felt ill, to call a number to arrange a phone consultation. The request to stay away from my local NHS facility was polite but firm: “Please do not attend.” One month later I got another text, with a longer list of countries (China, Hong Kong, Italy’s Lombardy region, Japan, Macau, Malaysia, Republic of Korea, Singapore and Taiwan). If ill, self-isolate and call 111.

I found it reassuring that the NHS knew how to reach not just me, but most people in the country. If coronavirus escalated, it would be able to locate us and instruct us on what to do. Since everyone living here legally is covered through the NHS, the incentives in the system were aligned to stop the virus. The NHS was responsible for us. If we all got sick, it was on them to take care of all citizens.

There are no such incentives in the US, where I am from. More than 27.5 million people have no insurance, and would likely fear coming forward for testing because they could be charged for treatment. Research and technology and resources might be richer, but the ethos was poorer: even since the advent of Obamacare, healthcare exists foremost for the employed and those who can pay. And it’s on you to figure it all out—the forms and deductibles, co-pays and pharmacy benefits. If you have insurance, it is in the interest of the insurer to pay as little as possible.

At first this made me especially grateful to be in the UK at this moment. But prime minister Boris Johnson seems to be gambling all that is good about socialized medicine—the collective ethos and right to care for all—in what appears to be a dangerous bet to tackle Covid-19, which has infected 162,687 people worldwide and killed more than 400 people in Italy yesterday alone (the same day, the UK’s coronavirus-related death toll  jumped from 21 to 35, with 1,372 cases out of 40,279 people tested).

Last week, as Italy and then France and Spain shut down their countries, asking people to stay home, banning mass gatherings, shuttering schools and ramping up testing and contact tracing, the UK charted a different course. It told older people not to take cruises, asked people who were coughing to stay home, and opted to keep schools open. It did not immediately ban large gatherings, though it may be changing course on that after an eruption of public disbelief. While sports governing bodies canceled their own events, Britain was told to ramp up its handwashing.

The idea, according to Johnson and his chief scientific adviser, is to flatten the curve of the pandemic to take pressure off the strained health service, and to build up longer-term resistance so that when people socialize again, they don’t reignite the virus. Britain will build herd immunity.

“This virus is going to be with us for a long time,” Graham Medley, chair of the Scientific Pandemic Influenza Group on Modeling, told BBC Newsnight. The epidemic will become endemic, so the goal is to generate herd immunity, where the majority of the population is immune to the infection. “The only way of developing that in the absence of a vaccine is to let the majority of the population become infected,” he said.

That means managing the process of when and where and how fast the virus is acquired, and minimizing the exposure of the vulnerable population. Refusing to close schools is a calculation. It means potentially more transmission among students, but it is a defense against losing the services of healthcare workers with school-age children, and it keeps grandparents from risking exposure by stepping in to help care for their grandchildren, as they likely would be called upon to do for children whose parents are doctors, nurses, or medical support staff.

It’s a gamble Johnson is taking with all of our lives, especially older and more vulnerable Brits, and actively dismisses the hard-won lessons millions of others have learned: that testing, contract tracing, and social-distancing measures including isolation and quarantine work. Indeed, even with the collective bid to build herd immunity (i.e. get the virus and hope it’s ok), Johnson warned the British public this past week to prepare to “lose loved ones before their time.”

Is this the best way?

Other countries seem to have taught us differently. South Korea ramped up testing, including at drive-through clinics to keep infected patients in their cars and not in public places; aggressive contact tracing in Singapore helped establish who might have been exposed (one study by Harvard University public health researchers estimated that Singapore was detecting three times the number of cases as other countries due to its surveillance and contact-tracing protocols). China implemented draconian social-distancing measures, such as banning large gatherings, restricting movement, and enforcing self-isolation and quarantine, taking an economic hit to buy time for its health services.

The World Health Organization has praised these countries for their testing and contact tracing and aggressive social distancing, alongside public health campaigns around hygiene. It has not extended that praise to the UK. Tedros Adhanom Ghebreyesus, director of the WHO, criticized the UK’s decision to stop testing people with mild symptoms. “You can’t fight a virus if you don’t know where it is. Find, isolate, test and treat every case, to break the chains of transmission,” he said. “Every case we find and treat limits the expansion of the disease.”

“This is worrying and possibly reckless,” wrote Devi Sridhar, an associate professor at the University of Edinburgh’s Medical School, in the Guardian.  “It is impossible to keep separate the 80% who would largely be fine after contracting the virus from the 20% who would suffer severely. Especially if there is no testing taking place, we will not know exactly who has had the virus and when, and we still don’t know yet whether individuals can be re-infected once they have recovered.”

Tom Frieden, a former director of the US Centers for Disease Control and Prevention, made a strong case for social distancing in a March 10 piece for Vox. “This is why we are now urging social distancing measures that seem extreme: by reducing disease spread, we can ‘flatten the curve’ so that the cases we will inevitably see are spread out over time and don’t overwhelm the health care system,” he wrote.

Adam Kucharski, a mathematician and epidemiologist at the London School of Hygiene and Tropical Medicine, took to social media to say that herd immunity as a goal is a mistake. “For me, herd immunity has never been the outright aim, it’s been a tragic consequence of having a virus that—based on current evidence—is unlikely to be fully controllable in long term in the UK,” he wrote on Twitter.

In the UK right now, doctors and health professionals who are ill are told to self-isolate, the same advice as citizens, and tests are offered only to those displaying severe symptoms. If they are sick they should take the same measures as if they had Covid-19. So why bother testing?

Because isn’t knowing better than not knowing when it comes to a pandemic?

Individuals are taking matters into their own hands. Waterloo station was virtually empty today at rush hour; theaters are shutting, sporting events are being canceled, in spite of guidance that it is not necessary. Downing Street has announced it will hold daily briefings. It’s possible the government may announce tougher measures, but its opening salvo was hardly reassuring.

The downside of socialized medicine?

According to critics, successive governments have underinvested in the NHS, and austerity took its toll. Many frontline workers feel woefully underprepared, from not having adequate masks and personal protective equipment, to knowing there are neither the ventilators nor the ICU beds that likely will be needed.

And so the virus lays bare the values of the two countries: America’s fierce individualism, which delvers world-class healthcare for a portion of society and leaves millions vulnerable, and the UK’s overstretched NHS, which in the face of the greatest public health crisis of our lifetime seems to be resorting to “keep calm and wash your hands,” but prepare to get coronavirus, and to say goodbye to older loved ones.

I have lived in the UK for six years and in that time I have come full circle on socialized medicine. I grew up in a family where socialized medicine was akin to cancer: something to avoid at all costs. In the 1980s, a member of parliament (MP) used to visit us during his trips to the US for medical care, and I distinctly recall my parents’ horror that he had to wait a year for a new hip in Britain. In the US, if you want a hip replacement and you have insurance, you do not wait a year (especially if you are an MP). And our new hips would be state-of-the art.

Socialized medicine is not based on exceptionalism but on the stark reality that access to healthcare is a pre-requisite to pursuing life, liberty, and happiness. Here, healthcare is not tied to employment; it is a human right. When you leave the surgery (clinic), there are no bills, no forms, and no confusion. There is a parallel private system but it is staffed largely by the same doctors in the public system. If you need to have a patch of skin tested for basal cells, it will take four months to go through the public system; go private and you can get it done in a week. But often the same doctor treats you. It is a system that values the collective over the individual, and could be well-suited for a pandemic in which everyone will truly need to work together.

So far, Britain’s leaders are failing to harness that system. I don’t feel safe anymore.