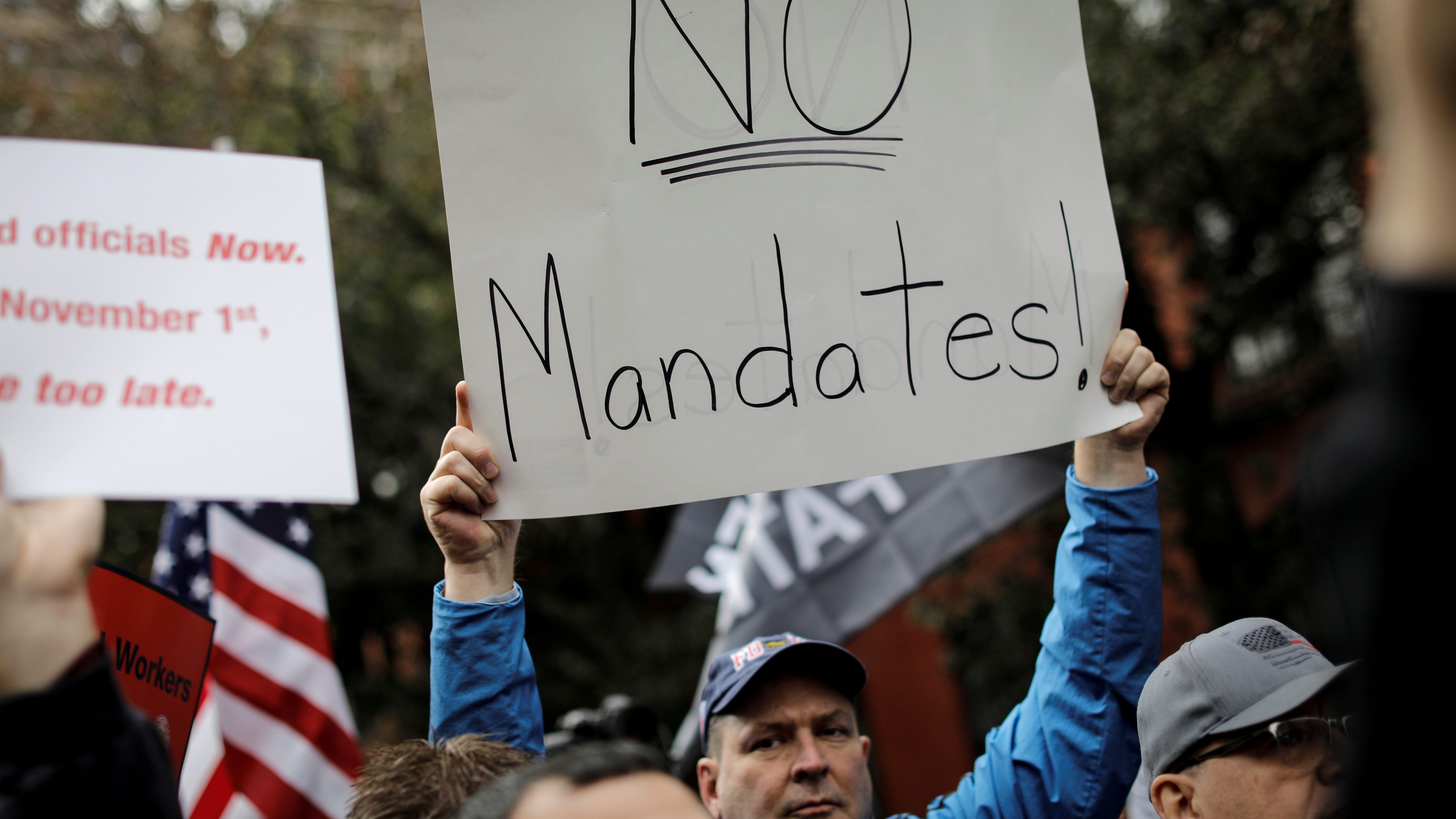 President Joe Biden’s vaccine mandate is being buffeted by demonstrators, litigants, and Trump-era judges—all of whom doubtless put on their seat belts without giving it a second thought as they drove to their protest sites and courthouses.

Biden’s mandate, announced on Nov. 4, requires private companies with a minimum of 100 employees to ensure that their staff is either vaccinated against covid-19 or tested weekly. It also instructed all healthcare workers at Medicare and Medicaid facilities to get both vaccine doses by Jan. 4.

The resistance to this measure wasn’t widespread, but it was loud. Protests broke out in pockets around the country. A US appeals court suspended the mandate for private businesses after mere days, in response to a suit from a motley group of petitioners that included (pdf) the states of Texas and Louisiana, the Gulf Coast Restaurant Group, and the Word of God Fellowship. On Tuesday (Nov. 30), judges in Louisiana and Missouri separately ruled against the mandate for Medicare and Medicaid workers.

The thrust of the opposition to the mandate is predictable: that the government shouldn’t compel people or companies into doing anything they don’t want to do; one judge wrote that the mandate eroded “the liberty of individuals to make intensely personal decisions according to their own convictions.” But the mandate’s own premise—that a government has the right to enforce rules that keep others safe, even if they infringe on personal choice—has one staunch precedent. Seat belt laws met with similar opposition when they were introduced in the 1980s; today, though, nobody questions either their legitimacy or their importance in protecting people. The vaccine mandate is no different.

In 1973, the National Highway Traffic Safety Administration (NHTSA), a federal agency, composed a new rule: that all newly manufactured cars had to include a “seat belt interlock mechanism.” At the time, there were no explicit laws on the books requiring drivers or passengers to wear seat belts, so the mechanism was a work-around: It prevented the car from starting unless the driver was buckled in.

The rule lasted just a year. Many owners were disconnecting the mechanism by way of protest, the New York Times found in 1974, when the rule was killed, and Congress was receiving a high “volume and vehemence of constituent mail on the subject,” Time magazine reported. But just as we know today that vaccines are highly effective against covid-19, the NHTSA knew back then that seat belts undoubtedly protected people. A 1974 study of police-reported accidents, involving 40,000 drivers and passengers, found that people using a three-point seat belt had a 60% lower rate of serious injuries and a 41% lower rate of injuries of any kind when compared to unbelted people. And no one using a three-point seat belt died at all.

In 1977, the NHTSA gave it another shot, now instructing car manufacturers to introduce a passive mechanism: airbags and a belt system that locked into place automatically, without drivers having to do anything. Four years later, the Reagan administration, acting on its primal deregulatory instincts, overturned the NHTSA’s rule. But in 1983, the Supreme Court reinstated it, opposing big auto companies, which had “waged the regulatory equivalent of war” against these standards, as the verdict described it. “Seatbelts unquestionably would save many thousands of lives and would prevent tens of thousands of crippling injuries,” the justices wrote. “Unlike recent regulatory decisions we have reviewed…the safety benefits of wearing seatbelts are not in doubt.”

The vaccine mandate is designed to protect Americans

The Supreme Court’s verdict affirmed a political principle: that the state can make rules to modify people’s behavior if there is a provable benefit to the well-being of the public. In the spirit of the principle, a number of states began to formulate laws to enforce seat belt use. This too met with the kind of argument invoked by opponents of the vaccine mandate today. When a Michigan legislator introduced a seat belt bill, a voter compared him to Hitler. The state of New York became the first to pass a seat belt law, in 1984, and within a year, at least 32 states were debating similar laws of their own. “This is not supposed to be Russia where the government tells you what to do and when to do it,” a resident of New York City complained to the Washington Post in 1985.

For a while, courts continued to be pressed into constitutional reviews of these laws. (One absurd petition, in North Carolina, claimed that being forced to wear a seatbelt was tantamount to slavery.) Invariably, the laws withstood the reviews. At least two courts came to the conclusion that “the legislature has a rational and reasonable basis to believe that unbelted drivers and passengers endanger the safety of others, not just themselves,” a legal researcher in Connecticut wrote in 1998. That was enough of a “compelling state interest” to briefly limit a person’s liberty by strapping them into a seat belt.

The same kind of state interest attends vaccinations against covid-19. Between 1913 and 2019, the year that registered the most deaths in US car crashes was 1972, which saw 56,278 fatalities. In the ongoing pandemic, nearly 777,000 Americans have died of covid-19 in less than two years—an outsized crisis even when compared to the road fatalities in the deadly year of 1972. And as the courts concluded in their constitutional reviews about seat belts, the unvaccinated too endanger the safety of others, not just themselves.

As the seat belt laws persisted, their legitimacy and importance began to be internalized, to the point that we don’t think twice about buckling up today. The laws inaugurated the shift in culture. It’s difficult to say, of course, if the covid-19 pandemic will be around long enough for any vaccine mandate to work its way into our habits in the same way. But if the Biden administration sees covid-19 as a problem simmering into the medium term, it may appeal judicial rulings that strike down its mandate, sending it all the way to the Supreme Court. And its arguments in court would mirror those made more than 30 years ago about seat belts. The “compelling state interest” to mandate shots is, if anything, stronger than that for seat belts, especially in the face of widespread vaccine resistance and a still-burning, still-ramifying disease.