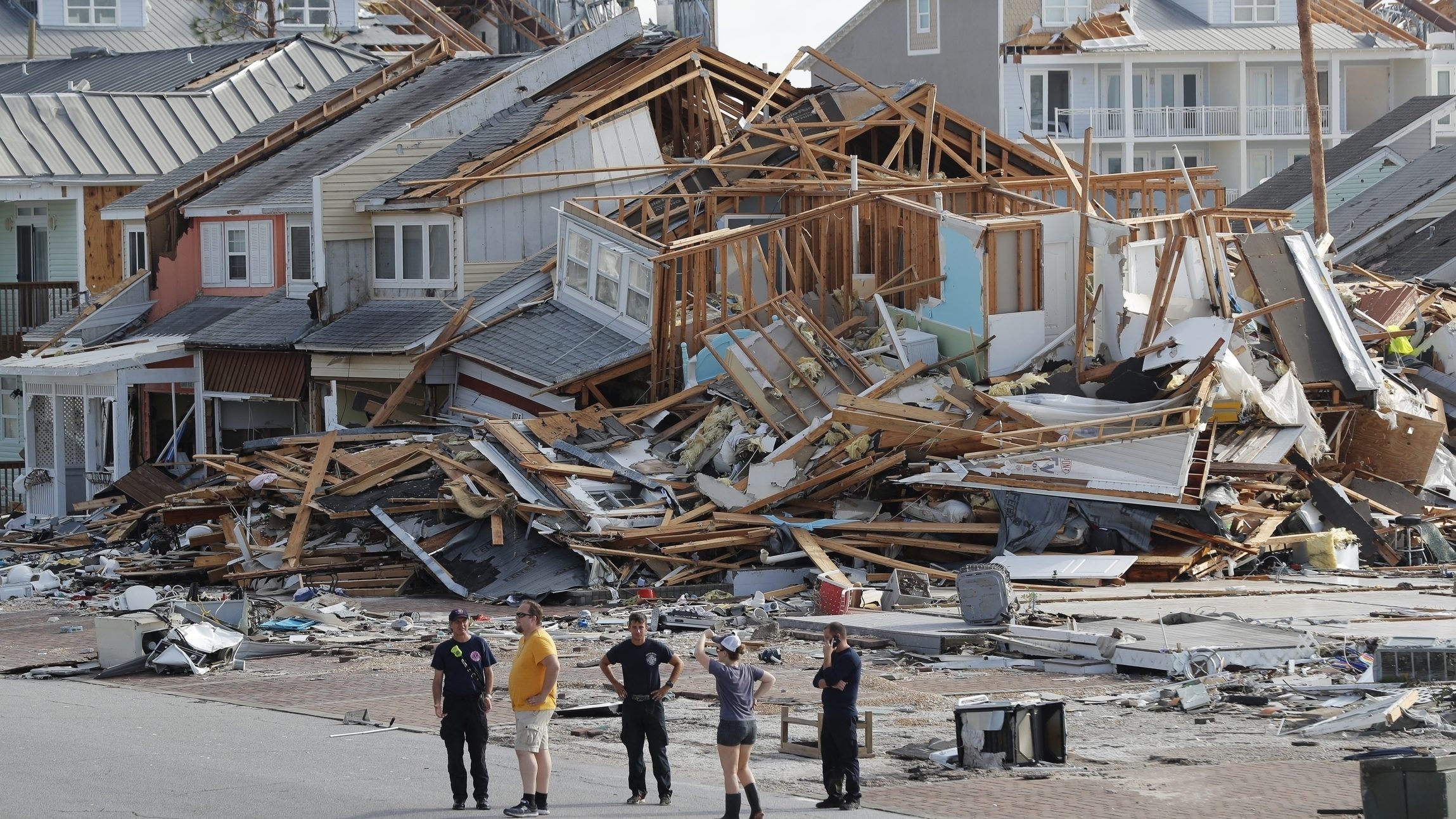 As the Atlantic hurricane season officially begins this week, forecasters are saying it may be one of the most active on record. Add to that the coronavirus pandemic, which promises to complicate every stage of hurricane response, from emergency aid to reconstruction of homes and economies.

But disaster response is a long game—which means Covid-19 is already disrupting recovery from storms that are in our rearview mirror.

Hurricane Michael hit the Florida panhandle in October 2018. The brunt of the storm fell on Bay County, Florida, where the pandemic has thrown rebuilding months behind schedule, leaving hundreds of families without homes and struggling to get back on their feet.

As the threat of coronavirus continues to overlap with the upcoming hurricane season, the experience of Bay County illustrates how natural disasters can leave low-income communities exposed to a compounding cascade of impacts: First the storm itself and the drawn-out recovery, then a pandemic that introduces further delays, health risks, and economic disruption.

Bay County’s recovery has been tedious and grueling, even by normal standards of post-hurricane rebuilding. With winds over 160 mph, Michael was only the fourth Category 5 hurricane to make landfall in the US. The county’s 180,000 residents, divided between working-class inland communities, a ritzy beachfront, and Tyndall Air Force Base, were hit the hardest: 16 deaths, 22,000 left homeless, and $25 billion in property damage.

Affordable housing was already in short supply before the storm. Afterwards, 70% of rental housing stock was severely damaged or destroyed. Nearly three-quarters of residents were renters, many of whom lacked insurance and had few alternatives for housing. In Panama City, the county’s hub, one-fifth of residents live below the poverty line.

Private and nonprofit construction crews, in coordination with county officials, have been working to rebuild housing since the storm. But by this spring, there were still around 300 families living in FEMA-supported mobile homes or other temporary accommodations, waiting on their chance at an affordable apartment.

Then coronavirus hit. Almost overnight, the gears of rebuilding and recovery ground to a halt.

“A lot of people are in the exact same situation as they were on Day 1,” said Susan Marticek, executive director of Compass82, a disaster recovery nonprofit contracted by the county to help residents deal with insurance and other bureaucracy. “We were dealing with pretty harsh problems before, and now this is a new world. It’s uncharted territory.”

The first sign of trouble was the disappearance of the Mennonites, said Donna Pilson, executive director of Rebuild Bay County, a local nonprofit helping residents rebuild homes or look for new ones. Since the storm, the Pennsylvania-based Mennonite Disaster Service, which deploys volunteer construction crews after many natural disasters, had been a critical source of free labor. Teams of a few dozen volunteers—including many with high-grade carpentry skills—would bus down for two weeks at a time, and could build a house in two months flat.

In mid-March, Pilson was also expecting a group of at least 100 student volunteers on spring break from universities around the South. They all had to cancel.

Instead, she had to turn to private contractors. This not only raised the cost but also slowed the work down: Contractors were in short supply even before the pandemic, and they’ve since gone down to skeleton crews. With less work on offer, and with reasonable fears of the virus, many contract laborers also chose to stay home. According to a survey organized by Daniel Castellanos, a New Orleans-based labor advocate with the group Resilience Force, of 600 contract laborers who came to Bay County after Hurricane Michael, at least 60% went home because of the pandemic.

Some aspects of the recovery have been a bit smoother. Marticek said her disaster case managers were able to shift their clients’ mountains of insurance and government paperwork from face-to-face meetings to online. FEMA extended its subsidized housing program, which had been due to expire in April, into mid-July. And Pilson said the hurricane had prompted the creation of a network of fully-staffed aid groups that, by the time the pandemic hit, were able to quickly pivot to Covid-19 response.

“We were just starting to settle into a groove, and when the pandemic started, it forced us an organization to grow up faster,” she said.

Rather than housing, her new priority is meals. Her office handles thousands of requests for food aid every week from families whose finances have taken a blow from the pandemic. As a silver lining, food aid has helped her forge connections with community members who also need help with hurricane recovery.

“I was working food distribution, and somebody in line asked if I was the Rebuild Bay lady,” she said. “That’s access. You came for one need, and you can talk about another need. He might not have picked up the phone ordinarily. We can put information in your hands as we put food in your hands.”

Still, Marticek worries that the economic downturn will put a serious damper on the recovery. Bay County is a case study in why governments in disaster-prone areas need to be more proactive about creating rapid recovery plans in advance, she said, so that vulnerable communities aren’t left in limbo—and exposed to other unanticipated crises—for years on end. With a season of major hurricanes, wildfires, flooding, and other disasters brewing, and the pandemic far from over, the time is now to prepare and have professional case managers on standby.

“Everywhere you drove in Bay County you couldn’t pass a strip mall that didn’t have a hiring sign on it,” she said. “And now that’s not the same. If you can’t get jobs, you can’t get people in housing.”