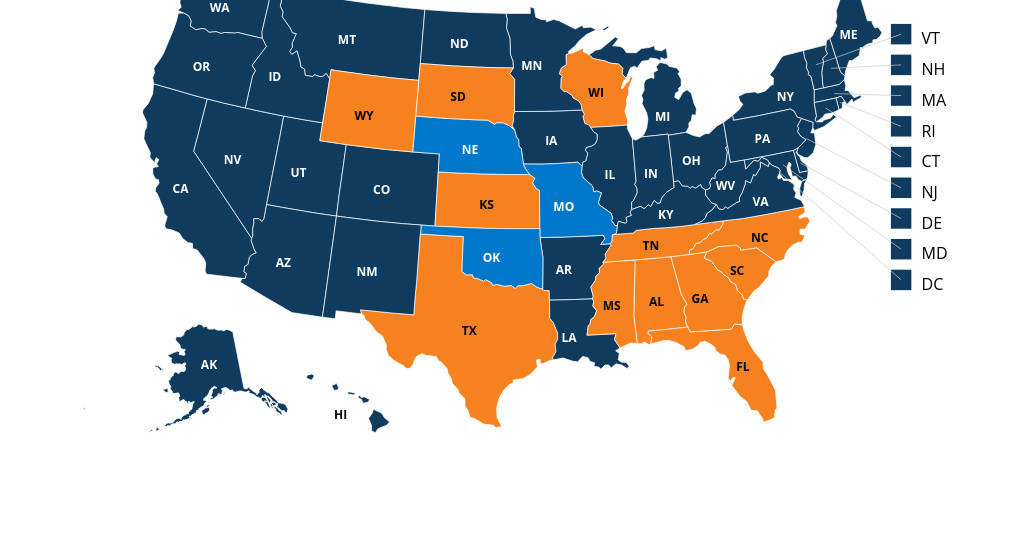 For the second time this summer, voters in a solidly Republican state have decided now is the moment to expand Medicaid coverage through the Affordable Care Act.

Missouri voters passed a ballot initiative to expand Medicaid during Tuesday’s primary elections; 53 percent of voters supported the measure and 47 percent opposed it. That vote comes about a month after Oklahoma voters also decided to expand Medicaid via ballot referendum by less than 1 percentage point.

Once the expansion takes effect in those two states next year, an estimated 340,000 people who currently have no affordable health insurance option will become eligible for Medicaid. That still leaves nearly 2 million people in 12 states nationwide who are stuck in the Medicaid expansion gap — ineligible for coverage because their state refuses to expand the program but with an income too low to qualify for tax credits to buy private insurance — but it is yet another step toward the universal Medicaid expansion Obamacare authors envisioned. In the last few years, voters in Idaho, Maine, Nebraska, and Utah have also approved Medicaid expansion via ballot initiative.

Those initiatives have almost always been passed over the objections of Republican elected officials, as was the case in Missouri. Conservative interest groups sued to try to stop the Missouri ballot question from being put before voters. Republican Gov. Mike Parson also opposed it, saying Missouri could not afford expansion even though the federal government will pick up 90 percent of the costs. The Missouri initiative was actually written to prevent tampering by the state legislature or the governor. Medicaid expansion would be enshrined in the state constitution, and the state cannot add work requirements or any other limits on benefits.

Supporters argued Medicaid expansion would save rural hospitals in the state. As I have previously reported, one in four rural hospitals nationwide is in danger of closing, and one of the strongest indicators of a hospital’s vulnerability is being located in a non-expansion state.

It is difficult to ignore that these ballot initiatives passed in right-leaning states in the middle of the coronavirus pandemic, when millions of Americans have lost their jobs and, with them, their employer-sponsored health insurance. This is partly a coincidence — the signatures were collected to put the Medicaid expansion questions on the ballot long before Covid-19 ever arrived in the US — but the relatively narrow margins made me wonder if the pandemic and its economic and medical consequences proved decisive.

Crises have a way of changing political attitudes. And right now, disapproval of the Affordable Care Act is at a low ebb, with just 36 percent of Americans saying they have an unfavorable view of the law in the Kaiser Family Foundation’s July 2020 poll. More than 80 percent of Americans also signaled support for providing more financial assistance to help people who don’t get health insurance through their jobs and for increasing federal funding for state Medicaid programs.

It is too soon to say whether any shift in the public’s policy preferences will be permanent. But we shouldn’t be surprised if a crisis as disruptive as the coronavirus pandemic leaves a long-lasting mark on our politics.

How much is coronavirus going to change health care politics?

This is a question I have been pondering for months: How much will the pandemic change us? Or, to put it the other way, how quickly do things snap back to normal.

“Really big events do have substantial effects on political attitudes and preferences,” Jacob Hacker, a Yale University political scientist, told me in the spring. “We could see attitudinal changes, comparable to what we see in military conflicts.”

Hacker and some colleagues found this to be true in research they conducted after the Great Recession. Personal experiences with economic insecurity during that crisis led to a shift in policy attitudes of a magnitude that they said “rivals partisanship and ideology.” People who experienced more profound personal shocks ended up supporting a bigger government role in mitigating their economic risks.

This has been a consistent finding in social science for decades; two sociologists examined how social attitudes changed in Great Britain during and after World War II. There was greater social solidarity, so there were not many objections when taxes had to be raised to fund the war effort and rebuilding. And there was more support for progressive taxation and equal treatment in the fallout of that global crisis.

As Hacker put it: “The middle and working classes lose their lives, the rich and business at least have to lose their money.”

Joe Biden has developed a health care agenda that is more progressive than that of any Democratic Party nominee in recent memory. On the Medicaid expansion issue, he has proposed allowing low-income people who live in states that have refused expansion to enroll in a new public insurance plan with no premiums or cost-sharing.

The Trump administration, on the other hand, is currently asking the US Supreme Court to overturn the ACA entirely — meaning the 12.5 million people who gained coverage through Medicaid expansion could lose their insurance.

So a significant expansion of health coverage probably depends on the outcome of the presidential election. A President Joe Biden would have a mandate to pass another health reform bill that patches up holes revealed by the recent crisis. (Democrats would also need to win the Senate and hold onto the House for major reforms to be possible.)

“Many of the biggest coverage expansions both in the US and in similar countries happened in the context of wars and social upheavals, as well as financial crises. One theory is that those circumstances redefine social solidarity, thus expanding views of the role of government,” Cynthia Cox, director of the Peterson-Kaiser Health System Tracker, told me earlier this year. “I think one factor that will determine the permanency of these changes is how long this disruption continues. The longer this goes on, the more likely this social solidarity becomes ingrained.”

In the meantime, Americans are registering at the ballot box their willingness to expand the social safety net. The success of Medicaid expansion with voters in Missouri and Oklahoma could portend bigger changes ahead.

This story appears in VoxCare, a newsletter from Vox on the latest twists and turns in America’s health care debate. Sign up to get VoxCare in your inbox along with more health care stats and news.