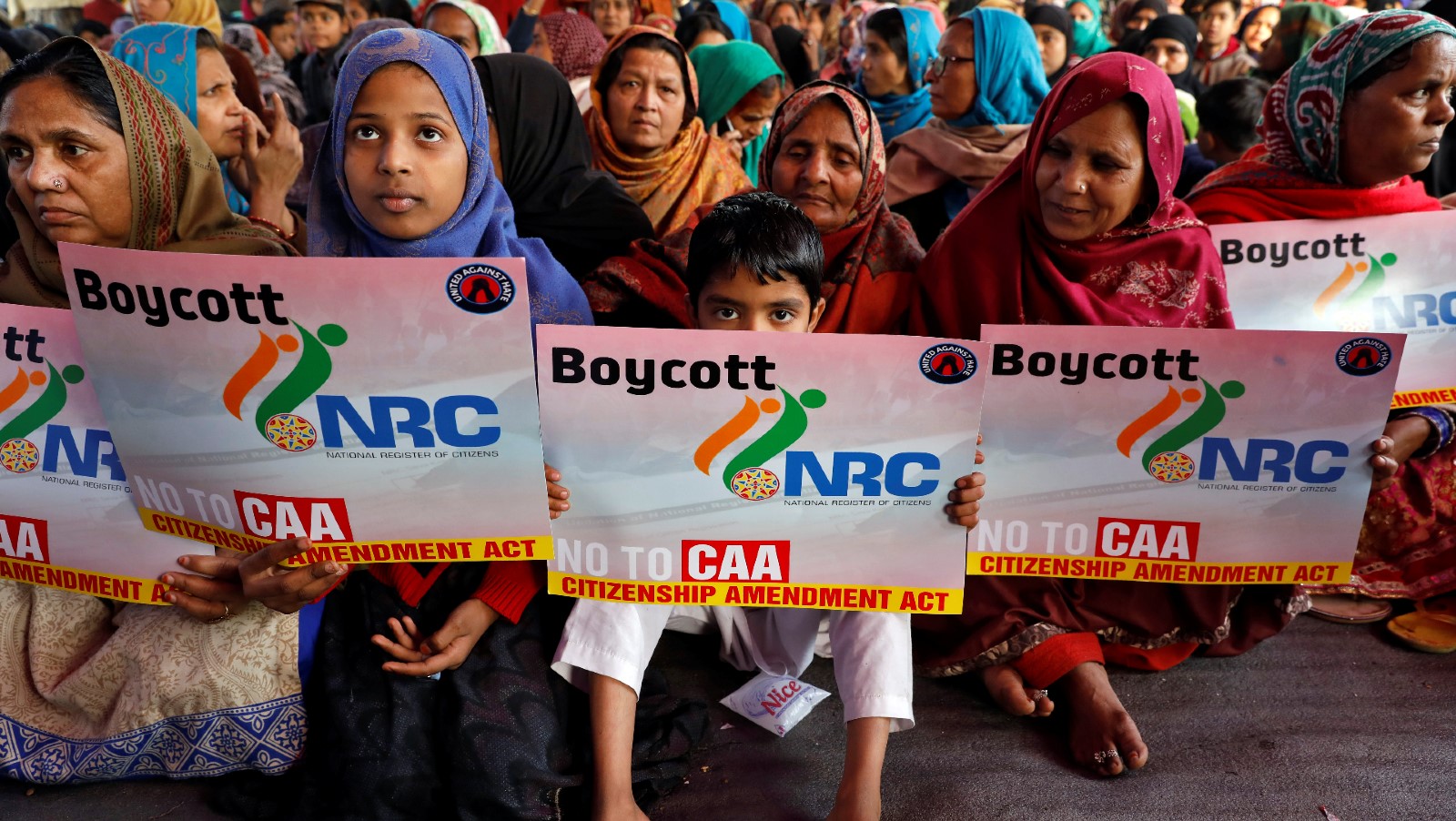 Demonstrations against the Citizenship Amendment Act and the proposed National Register of Citizens have re-inserted secularism into India’s mainstream political vocabulary.

This shift in political discourse has come at the behest of the Muslim community and was then picked up by students, civil society groups, and political parties. The arguments made by the Muslim community, even by Islamic activists, against these citizenship initiatives are mostly articulated in the language of constitutional rights guaranteed to all Indians.

This focus on fundamental rights belies the conventional wisdom that the hegemony of majoritarian politics would provoke radical tendencies among Indian Muslims. The onslaught of Hindutva politics, implemented by the Bharatiya Janata Party (BJP), is increasing state hostility against Muslims day by day. It is exacerbating their socio-economic marginalisation.

Bias against Muslims is not just evident in the deliberate misconduct by police forces but is even written into the law. For instance, the Disturbed Areas Act in Gujarat severely restricts property transactions between Hindus and Muslims in urban Gujarat to “maintain demographic equilibrium.”

On top of that, the Muslim community’s political representation is at one of its worst levels since Independence: the current Lok Sabha (lower house of India’s parliament) has only 25 Muslims out of 543 members, six more than in the last Lok Sabha. This translates into a little over 4.5% share in the Lok Sabha, even though Muslims form 14.2% of India’s population.

In January 2018, out of BJP’s 1,418 MLAs, only four were Muslim, though the BJP’s dominance in northern and western Indian states has somewhat faded since then.

Despite this, the growing invisibilisation of Indian Muslims—the “fifth column” of Indian society for the Hindu nationalists—has not led to radicalisation, barring exceptional instances in Jammu and Kashmir and a few anecdotal instances in Kerala.

To the contrary, as the recent pro-democracy protests show, India’s Muslims are introducing a new vernacular idiom of secularism through civic symbols while sometimes innovatively merging them with religious motifs.

This signifies a fundamental transformation in the political strategy of the Muslim community over the years: Indian Muslims are privileging a language of rights over the religious-moral duties emphasised by Islamic reformists.

Muslim feminist groups have almost always employed an understanding of human rights. A case in point is Bharatiya Muslim Mahila Andolan, which has been vocal about women being denied entry to dargahs and demanding autonomy over personal life decisions.

In the current protests, upholding the national flag has been prioritised over religious ideals.

However, the “non-religious” groups among Muslims, such as pasmanda, or low-caste and Dalit Muslims, organisations working primarily in Bihar, Uttar Pradesh and Maharashtra, have devoted their energies to addressing the question of caste-based, socio-economic backwardness among Muslims through representative politics.

In the current pro-democracy protests, especially by leaderless Muslim women in many parts of India, the act of holding portraits of BR Ambedkar, Mahatma Gandhi, Savitribai Phule; reading the preamble of the Indian constitution; and upholding the national flag have been prioritised over religious ideals, at least in the public sphere.

Indeed, the storm of Hindutva is making Muslims secular—quite unlike, Mohammad Iqbal’s poetic revelation about the “storm of West.” This is not to claim that Indian Muslims were not aligned with secular aims earlier, but to indicate that the active assertion of constitutional and secular symbols is their new and unique contribution.

To speak this rights-based language more confidently, Muslims are increasingly adopting socio-political and educational means for progress, reducing the emphasis on moral reform.

Despite the stereotype, most Muslim children in India attend secular schools.

Even Islamists have begun to articulate themselves through a rights-centred vocabulary, though they often prefer religious morality over constitutional ideals, especially on the issue of personal law and religious practices.

My research on two Islamic reformist organisations operating in Gujarat, a state that was the laboratory for Hindu nationalist politics, confirms this discernible shift in prioritising socio-economic concerns over reformist activities.

For example, Muslim charity schools run by these groups, with gender-segregated classrooms and a part-time religious syllabus, use the state-prescribed curriculum—in some sense, merging the site of a secular school with that of a part-time madrassa.

Their aim is clear: to develop skills and learning capacities among Muslim children in light of continuous state neglect. By doing so, these Islamic activists negotiate secular modernity on their own terms, via justifications from Islam. They find a new moral ground to adopt secular positions by somewhat renouncing rigidities held regarding the infallibility of religious truth.

My findings are congruent with those described by Irfan Ahmed in his 2009 book Islamism and Democracy in India, which traces the remarkable metamorphosis in the value system of the Jamaat-e-Islami Hind, an Islamist group founded in 1941.

From a rejection of secular democracy and nationalism around the time of the Indian subcontinent’s Partition, the Jamaat began to trust religious pluralism, tolerance and a democratic system, particularly from the 1990s. These ideological transformations are most crucial, given Jamaat’s support to the Pakistan movement, including its role in Pakistan’s Islamisation project and alleged participation in terrorist activities through its student wing, Students’ Islamic Movement of India.

The Jamaat in India has not only abandoned its aim of establishing an Islamic state but also prompts its members to pursue careers in the social sciences, journalism and the civil services, while frequently collaborating with civil society organisations. This trend also can be witnessed in the functioning of political parties specially devoted to the Muslim question such as Asaduddin Owaisi’s All India Majlis-e-Ittehadul Muslimeen and the Welfare Party of India.

This discursive shift is slowly allowing Muslim groups to nurture solidarities with other marginalised groups facing similar threats and insecurities. The overwhelming Muslim support for Bhim Army chief Chandrashekhar Azad among Muslims in the past few years exemplifies this tendency.

However, the alliance between Muslims and Hindu Dalits is still somewhat incoherent given the over-representation of elite ashraf castes in Muslim groups whose socio-economic interests do not match with Dalit-led associations.

All this makes it clear that Indian Muslims have entered a post-Islamist phase, marrying a constitutional phraseology of freedom, justice and equality with religious notions. Their renewed faith in this vernacularised secular politics is borne out of the frustrations with the dominant liberal brand of secularism, which either preferred a limited adoption of mostly majoritarian religious symbols or abhorred display of religion in public altogether.

At best, the liberal custodians of secularism overlooked socio-economic concerns of the Muslim community, especially of the low-caste and Dalit Muslims, rallying behind an empty discourse supporting secularism, without mass appeal. At worst, Muslims were castigated as a community with antediluvian beliefs.

By exposing these fault-lines, though it is premature to say, the pro-democracy agitations led by Indian Muslims have provided a new life and meaning to not just secular democracy but even participatory democracy.

This post originally appeared on Scroll.in. We welcome your comments at ideas.india@qz.com.