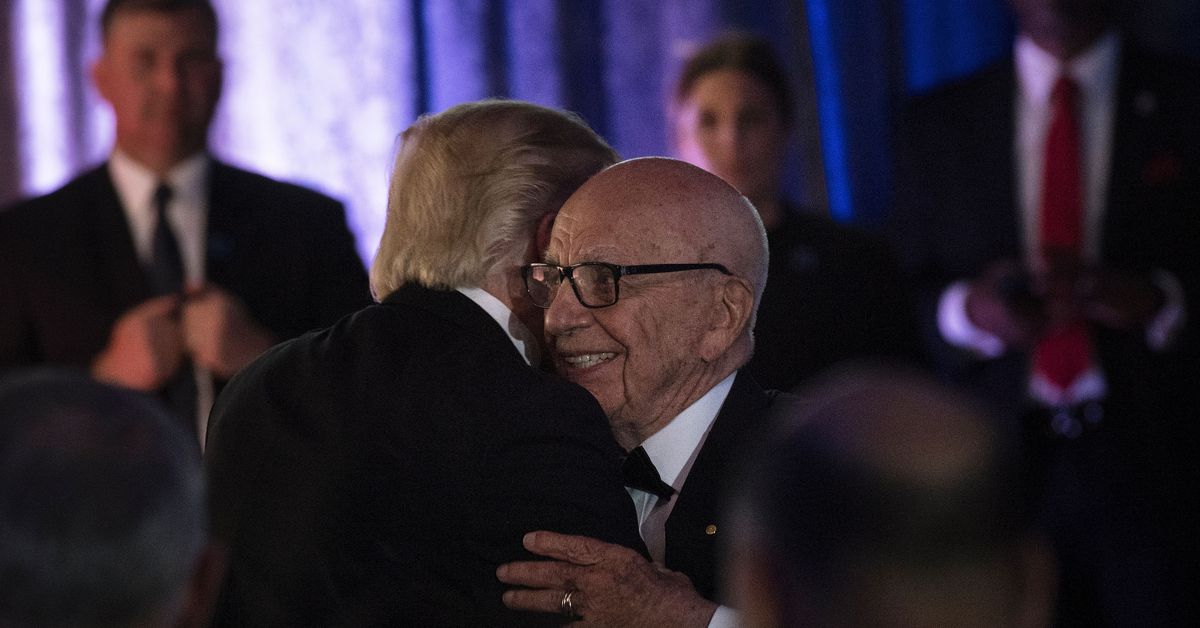 So what else is new?

The stakes. There’s a very small chance that Trump could actually disrupt a peaceful transfer of power with his baseless claims of election fraud. He will, more likely, permanently damage America’s ability to hold elections by undermining much of the country’s faith in them.

It’s time for Fox to dispense with its bad-faith, bifurcated approach to the truth it has used for years, which allows its most popular stars to peddle lies to its audience, under the guise that they’re merely offering their opinions.

That won’t happen, of course.

Fox’s well-documented symbiosis with Trump, where its top talent — Sean Hannity, Tucker Carlson, Laura Ingraham, the Fox and Friends crew — act as Trump’s on-and-off air advisers and cheering squad. (Even this week, as Trump floats a trial balloon that he’ll ditch Fox and take his audience to a much smaller media operation, like Newsmax, or start his own “rival” network, his complaints on Twitter are about Fox’s news operation, not his TV pals.)

Murdoch, who enjoys conservative politics but truly loves power, has an endgame in mind: By mid-January, Joe Biden will be president, and Fox News will be the disloyal opposition, a position where it thrives.

Either way, we’ll get to the same point next year, where Fox News is very comfortable attacking the Democratic president — who some viewers will believe doesn’t have the right to be in office.

As NPR media correspondent David Folkenflik reminded me in our chat this week on Recode Media, that’s a trope Fox News has used since its founding in 1996. It pushed the message that Barack Obama was (supposedly) an illegitimate president because he (supposedly) wasn’t born in the United States (not coincidentally, the main proponent behind this theory was … Donald Trump).

But in Foxland, Bill Clinton was also an illegitimate president — because he won his election with the help of Ross Perot, who ran as a third-party candidate and drew away votes that should have gone to George H.W. Bush.

So maybe Trump really will stop showing up on Fox and praising its talent on Twitter. Maybe he really will head to a would-be-rival TV network with minuscule ratings, or try to launch his own online service. Most likely, I think, he’ll end up as a recurring guest on Fox News, where he can doing what he does best — rant daily, without having to do anything else — and Murdoch can keep Trump’s fans on his network. Either way, when Trump leaves the White House, Fox News will spend the next four years laying into his successor.

But in the meantime, Murdoch is once again trying to have it both ways: His news operation — the one Trump tweets angrily about — has told its viewers that Trump lost the election, and that his complaints about voter fraud are made-up. But in the morning, and at night, it’s a different story.

This is where we’re at right now.

Laura Ingraham brings on an unidentified “whistleblower” — with hidden face and altered voice — to claim that folks literally from a Biden-Harris bus were altering ballots in Nevada. pic.twitter.com/b8xGe8KXSb

Someone used the identities of dead people to vote in the presidential election. Here’s the proof. pic.twitter.com/iFLWvfUvIE

Hannity, Carlson, and Ingraham do their own version of the Fox News two-step: They don’t come out and say outright that Trump is a victim of massive voter fraud that cost him the election while simultaneously defeating Democratic House and Senate candidates. But they argue that it’s plausible. They feed the fire with oxygen.

Fox isn’t the only one playing this game. Much of the Republican Party, from Senate Majority Leader Mitch McConnell on down, engages in a similar version: Either flat-out suggest that Trump’s claims are legitimate, or at least argue that he should be able to make those claims, and then see what happens.

It’s easy for anyone who wants to look to see what’s really happening. There’s the objective truth — hammered away by the likes of the New York Times, which ran “Election Officials Nationwide Find No Fraud” as its banner print headline on Wednesday.

Republicans are eager to tell reporters the same thing, but won’t attach their names to their statements. On background, they announce that they’re simply humoring Trump, or treating him, toddler-like, as someone who needs to be gently prodded into accepting his loss. Some Republicans are telling CNN’s Jake Tapper that this is “all part of walking President Trump through this process emotionally.” Or, alternately, they say that Trump is in on the joke: A “top White House aide” tells NBC’s Peter Alexander that Trump realizes his claims are “theater.”

This is all par for the course for the last four years, and beyond: If you consume a steady diet of Fox News and nothing but, you see the world very differently than the rest of us, even when it comes to life-and-death issues like the Covid-19 pandemic. (It may also matter which Fox host you like more: A study this spring concluded that Fox viewers who watched more of Hannity, who consistently downplayed the coronavirus in the spring, were more likely to contract Covid-19 than Fox viewers who watched more of Carlson, who was the rare Fox opinion host who warned viewers about the pandemic early on.)

And maybe this is the time we’ll get lucky, and the viewers of the country’s most popular news channel will eventually come around to the idea that Joe Biden is a legitimate president. As of this week, at least 80 percent of the country — and 60 percent of Republicans — say Biden won, per a Reuters/Ipsos poll.

On the other hand: Four years ago, just weeks after the presidential election, a 28-year-old man with a semi-automatic assault rifle walked into a pizza place and fired his gun because he was trying to “shine some light” on claims that Democrats ran a pedophile ring. At the time, “Pizzagate” was a dark conspiracy that lived mostly online; Tucker Carlson wasn’t doing segments on Hillary Clinton’s link to sex traffickers. (It hasn’t gone away, either: Pizzagate has now merged with QAnon, an all-encompassing conspiracy theory that is just as extreme, but has become mainstream enough that it is sending adherents to Congress.)

Now, Fox News is dancing with a conspiracy theory that could be equally upsetting to an angry, suggestible audience. The best case scenario is that Fox merely convinces its audience that voting is rigged, and against them. And its viewers are content to just watch Fox, seething.

But that’s a terrible range of outcomes. We shouldn’t expect better from Fox’s leaders. But we should definitely ask them to do better.