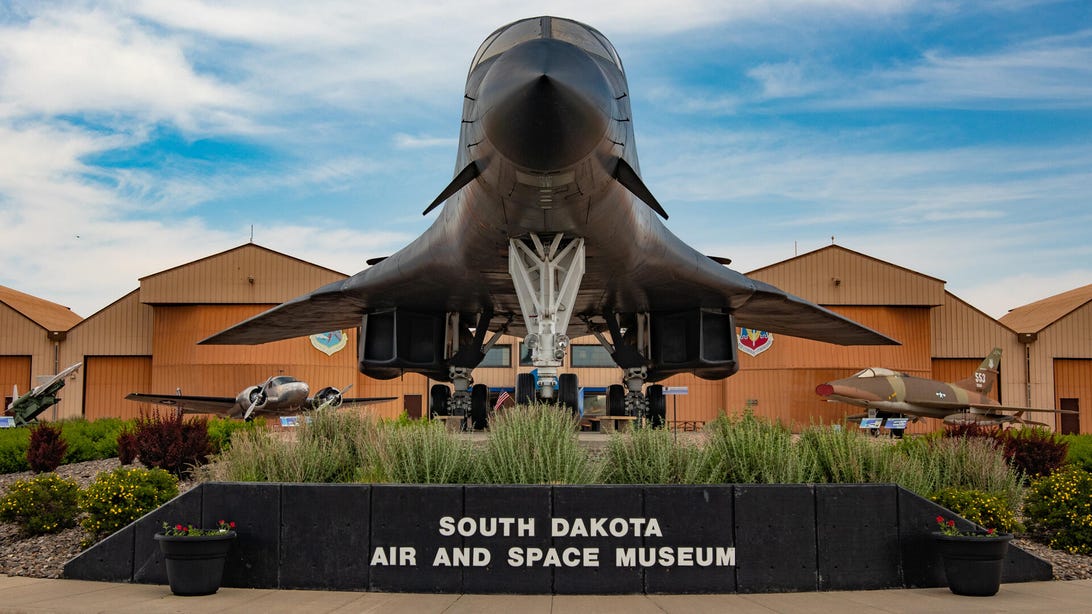 The B-1B Lancer was the second go at an aircraft with this general design. The first, the B-1A, was a high-altitude bomber capable of Mach 2.2; only four were built. One is at Wings Over the Rockies in Denver, which I’ve also toured.

Still in the sky

Inside the museum, you can see a mockup of a B-1B cockpit.

This particular B-1B was stationed in Texas for most of its life. That earned it the nickname, “Texas Raider.”

Taking a step back a few decades, this is the museum’s beautifully restored and maintained B-29, the “Legal Eagle II.”

The “Legal Eagle II” was built in 1945 and stationed in the Pacific for three years. It was then converted into a KB-29M airborne tanker before being used for target practice in California. It was rescued by the museum in the mid-’80s.

The Boeing EC-135 functions as an airborne command center in case of nuclear attack. This particular aircraft was a tanker before it was converted to command duties.

This big B-52 that was stationed at Ellsworth was the first such aircraft to land at the base.

This model is the D variant, which has longer range and the ability to carry a greater amount of conventional (i.e. non-nuclear) weapons.

The D variant was widely used in Vietnam, where they were commonly painted like this.

As big as it is, the B-52 isn’t slow. A cruise speed of just over 500 mph is about as fast as most modern commercial airliners.

Models before the G variant still had a tail gunner compartment, which lacked an ejection seat. G and H variants moved the tail gunner station forward with the rest of the crew. The gun was fired remotely.

The Douglas C-54 Skymaster transport was built in the ’40s and used by the military for 30 years. This example was ordered by the Air Force, but it was given to the Navy, which flew it until 1970.

On the right is the surface-to-air Nike Ajax missile. On the left is a Minuteman II ICBM, of hundreds rested in silos throughout the upper Midwest and Great Plains.

On this trip, I toured two Minuteman Launch Control Centers.

This isn’t just any B-25. It’s a VB-25J and the personal transport of General Dwight Eisenhower during WWII. The weapons were removed to make room for more seating, bunks, and a table. Bulletproof fuel tanks were added, along with additional navigations and communication gear.

The next entry in the Century Series fighter jets, the F-101 Voodoo, was designed as a long-range bomber escort. But it ended up serving as a nuclear weapon-capable fighter-bomber and a high-speed interceptor.

This example, despite only being in service for less than 10 years, was stationed everywhere from New York to Hawaii. At one point, it was flown by Gus Grissom.

The F-105B Thunderchief was a Mach 2-capable fighter-bomber. It first flew in 1955 and was used extensively in the Vietnam War. It could carry a greater bomb load than some of the legendary bombers of WWII including the B-17.

The, well, interesting looking F-111 Aardvark swing-wing aircraft filled a variety of roles throughout its 30 years of service.

The A-7 Corsair II was a light attack aircraft in service from the late ’60s to the early ’90s. This example was stationed in Pennsylvania with the Pennsylvania Air National Guard.

The swept-wing F-84F Thunderstreak was a significant development over the straight-winged F-84 Thunderjet which first flew shortly after WWII.

In addition to the swept wings and numerous other changes, the fuselage was stretched vertically to fit a larger, more powerful engine. One result of the design was an oval air intake.

This C-47 was built in 1944. It flew for the Air Force, the Navy and the Department of Agriculture.

This is an A-26, which for a time was also known as a B-26. It’s a light bomber and ground-attack aircraft. In the nose are eight 50-caliber machine guns. Additional machine guns could be mounted in pods on the wings and on dorsal/ventral turrets.

The B-57 Canberra was designed by British Electric, but built by Martin in the US under license. It features a wing with a relatively large chord. This the EB variant would pretend to be an enemy aircraft when training ground and aircraft crews.

One of the few helicopters at the museum, this UH-1F, aka a Huey, saw service as an air rescue vehicle during the Vietnam War.

The Titan I was notoriously difficult to maintain and slow to launch, largely due to its use of cryogenic liquid oxygen. After only three years they were replaced by the Titan II, which used more easily-storable propellants.