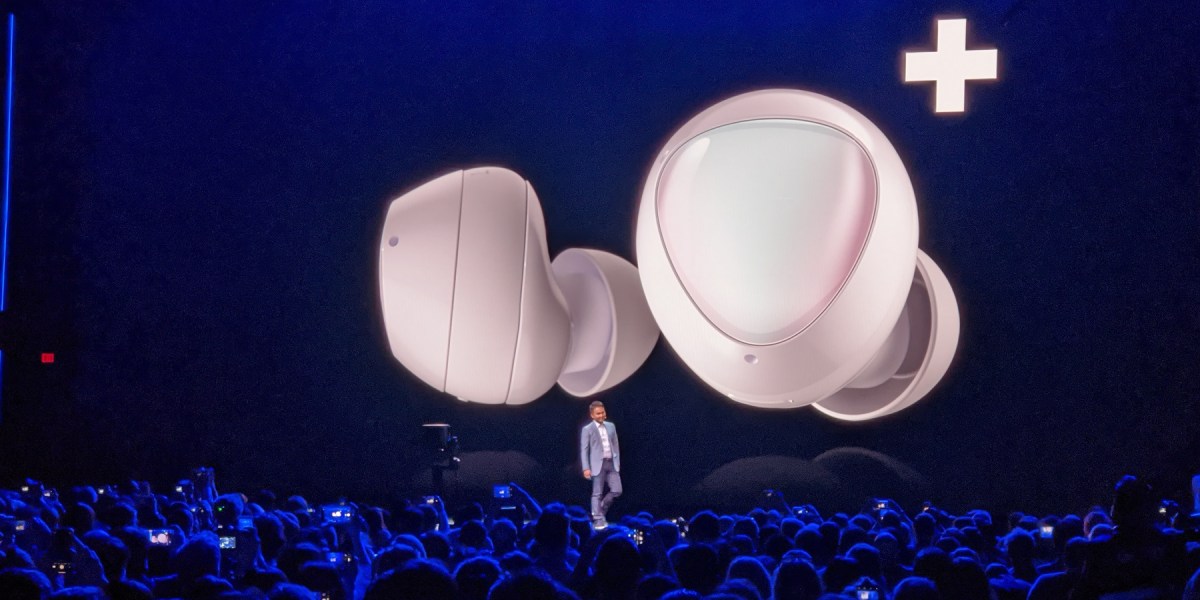 Samsung hosted the Galaxy Unpacked event at the Palace of Fine Arts in San Francisco on Tuesday and debuted Galaxy Buds+, its latest wireless earbuds to compete with Apple’s AirPods.

The new wireless earbuds come with a subwoofer for bass and nearly double the battery time of the original Galaxy Buds, which were released at the same event a year ago. The wireless earbuds that go on sale today in the U.S. for $149 also come with a Spotify integration. With a one-second tap on a Galaxy Buds+ touchpad, you can resume the track you were listening to on Spotify or get a music recommendation.

The company also debuted its latest foldable smartphone — the Galaxy Z Flip — and new versions of its flagship S20 smartphone this week. The Spotify integration is an absurdly simple feature that can be overlooked for flashier developments in the new smartphones, like an AI-powered camera that shoots from multiple angles or killer features like Flex Mode with the Z Flip, but Spotify with Galaxy Buds+ is noteworthy because it makes a music recommendation algorithm available with just a touch.

Like an album or playlist? Just double-tap to go to the next song. Not in the mood for what the algorithm is serving up? Another long tap of the touch pad will get you a new recommendation.

It should be said that you don’t get an endless flow of song recommendations. In early tests with Galaxy Buds+, I found that the recommendations serve up 12 playlists or albums based on my song listening activity in recent weeks, in sequential order. Half of those recommendations were Daily Mixes, playlists complied by the Spotify algorithm.

Spotify introduced the Daily Mix personalized playlists in 2018. Each list keys into different genres you might enjoy based on your listening history and combines the new and the old, presenting songs you’ve listened to before alongside recommendation engine results.

Daily Mix playlists can update daily, but it depends how often you use Spotify, according to the company website. I’ve used Spotify for years and personally never found Daily Mix playlists adventurous enough in song choice to check it out very often.

The Spotify integration for Galaxy Buds+ today is a little like streamlining a person’s access to the smartphone apps they’re most likely to use. That gives it value, and makes it novel — perhaps the first music algorithm available via quick-touch command.

But it also limits opportunities for music discovery, and it might be better if users could decide between more than 12 options or if they could decide their own rate of music discovery, even if that discovery only extends to algorithmically generated recommendations based on favorite albums or songs.

If you spend as much time inside Spotify as I do, the idea of this kind of musical roulette — a single tap leading directly to music discovery — sounds exciting, a chance at a continuous stream of music in tune with your musical tastes.

By combining the Daily Mix and your six favorite recent albums or playlists, Spotify with Galaxy Buds+ can lead to an algorithmically refined music selection, a lot of which you may be drawn to as a matter of habit. But this feature would be more interesting if it contained more recommendations that led to new music discovery.