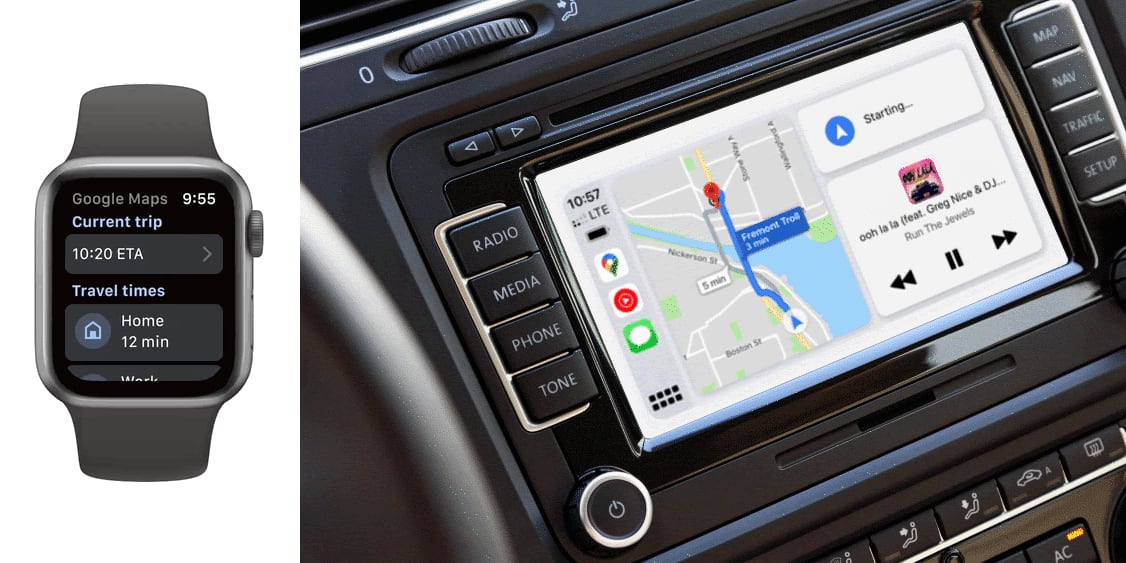 Apple’s Maps application became the dominant navigation option for Apple devices years ago, but Google apparently isn’t quite ready to cede either the growing wearables market or the automotive business to its chief rival. Today, Google announced that Google Maps for iOS will be adding both an Apple Watch app and support for CarPlay Dashboard, increasing the likelihood that Apple users will reconsider Google’s potential contribution to their walks and rides.

Google Maps for Apple Watch appears to be a very stripped-down version of the iPhone app, offering users step-by-step directions and estimated arrival times — but only for destinations already stored within the app or shared from the connected iPhone. You can tap on a list of destinations you’ve saved to conjure up directions from your current location — otherwise, navigation needs to start on the phone. Simple icons, foot/mile distances, and street names are indicated when walking, bike riding, or driving. Public transportation support is also included.

In addition to displaying full-color maps, Apple’s own Watch app includes voice recognition, handwriting input, access to contact lists, and a variety of point-of-interest categories to help users navigate without using a phone. It’s unclear at this point whether Google will actively try to add more functionality to its Apple Watch app — the Wear OS version of Google Maps includes voice input and map browsing features.

On the CarPlay front, the iPhone version of Google Maps is gaining the ability to work in the Dashboard mode already supported by Apple Maps, such that the screen is split into a moving map on the left, turn-by-turn directions at the upper right, and music, podcasts, audiobooks, and calendar appointment details at the bottom right. CarPlay Dashboard was opened to third-party developers in iOS 13.4, and while Google Maps isn’t the first app to take advantage of the feature, it and Waze are arguably the ones most people have been waiting for. Google has supported CarPlay with a full-screen Maps mode since 2018.

Google Maps’ CarPlay Dashboard support is available now for all CarPlay vehicles, while the Apple Watch app “starts rolling out worldwide in the coming weeks.” Both should be accessible from the iOS App Store’s Google Maps app.