Formerly owned by Nokia, digital map maker Here Technologies has spent the last several years working to refine and broaden the use of its location platform, after working for years to win users from Google Maps, Apple Maps, and TomTom. Today, Here announced that it’s offering high-definition 3D models of 75 major cities to enterprise developers — data that will enable companies to create the next wave of mapping, smart city, and entertainment apps using mixed reality and 5G technologies.

Covering urban centers such as London, Paris, and San Francisco, Here’s Premier 3D Cities models include both buildings and road networks, each with rich data layers, such as location names and addresses. Each structure is volumetrically and geospatially accurate to a sub-meter level, Here says, including size and elevation, even including its real-world exterior color. To aid in both data streaming and rendering, Here renders each square kilometer of data in smaller tiles using the Cesium 3D format.

Here’s new offering is significant for technical decision-makers because the digitalization of businesses and cities depends on digital twins — virtual replicas of buildings that can be accessed by their owners, personnel, and visitors for everything from remote facilities management to in-person navigation. At its core, the Premier 3D Cities platform offers enterprises access to realistic 3D models that could be used for anything from virtual site visits to last-mile deliveries or emergency planning. These models eliminate or dramatically reduce the need for businesses to recreate their own facilities in 3D while placing them within their actual urban surroundings. 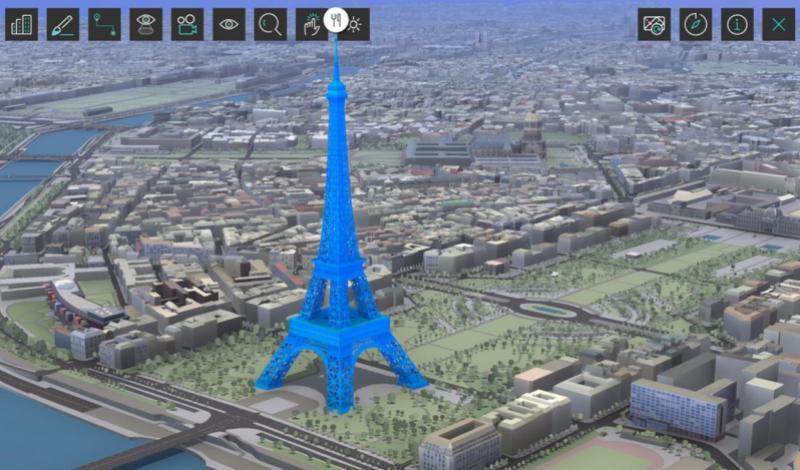 It’s important to note that Here’s data can be used as a starting point and infrastructure for enterprise-scale map and location services, not just an end point. Developers can build upon Here’s 3D models by adding their own metadata and render buildings, streets, and entire cities with even more sophisticated techniques, such as more detailed textures, lighting, and environmental effects. Illustrating the wide range of potential applications, Here expects that the entertainment industry will be able to use its 3D cities as backdrops, while telecom companies will be able to plan 5G network buildouts with volumetrically accurate location details. Because the models are three-dimensional, they’ll be as easy to display on augmented and virtual reality headsets as on vehicular, smartphone, and computer screens.

It’s clear that the initially publicized slate of 75 cities is only the beginning for this offering, as Here is already boasting “over 80 cities” on its website and notes that it has mapped 196 countries using a combination of lidar, optical, and satellite imagery. Developers interested in sampling Here’s Premier 3D Cities data can access free maps of Berlin, London, and Munich on AWS Data Exchange — roughly 40 to 50 square kilometers per city, each available for non-commercial, 90-day trial use.

What you need to know about Telegram, the WhatsApp alternative