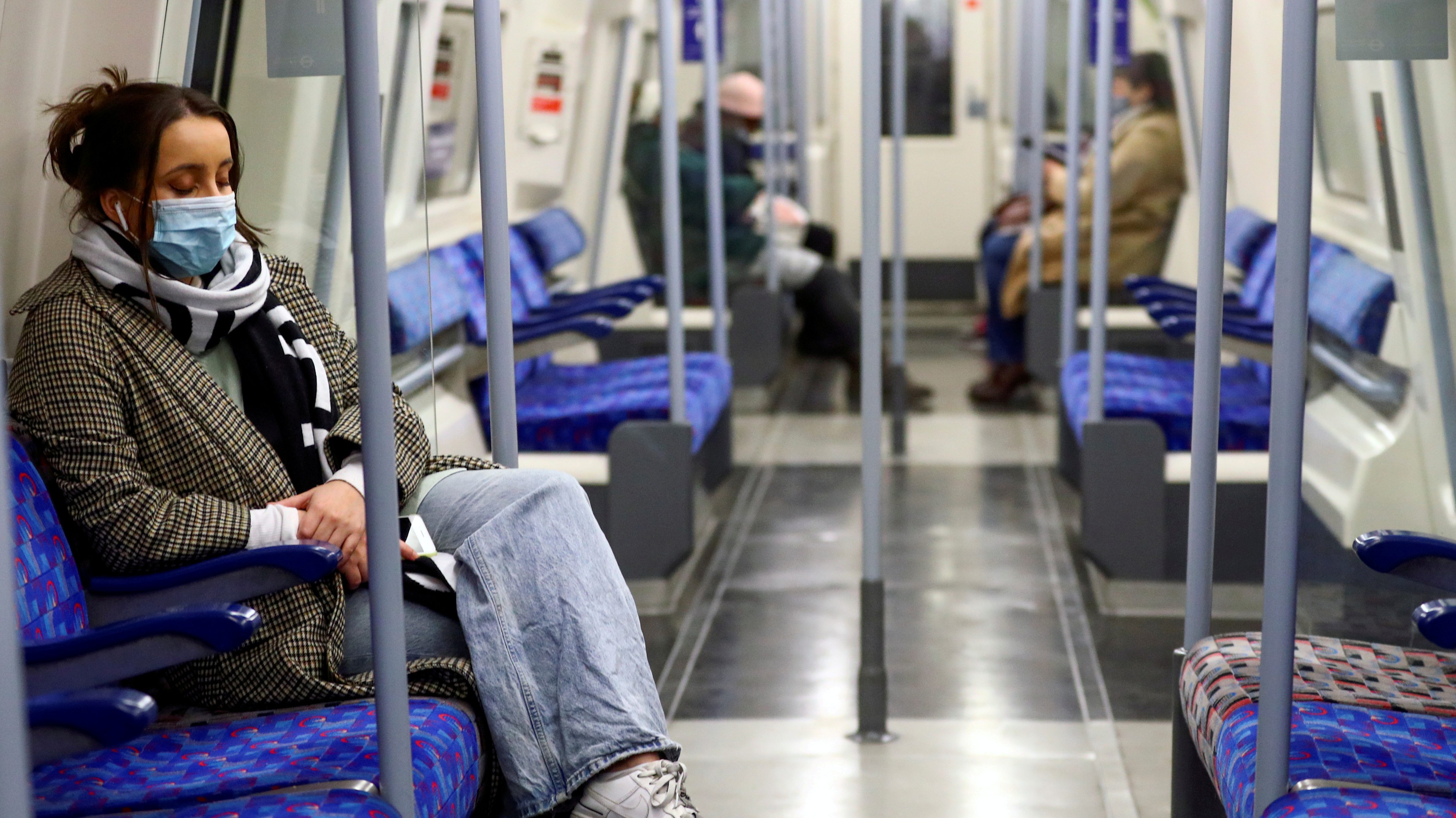 A therapist once called me a garden-variety neurotic (a compliment), but that label hasn’t felt accurate lately.

All the talk about returning to work in the office has dialed up my anxiety. I’ve been lucky enough that I could work remotely for the past year, unlike frontline workers. But now I can’t imagine taking the subway to my office. My stomach seizes up when I picture myself before an elevator with two or three strangers already standing inside, waiting for me to step in. I look forward to seeing my colleagues, but I also worry that everyone else will adapt to this next phase of the pandemic quickly, while I’ll still be paralyzed by fear.

Sian Beilock, the president of Barnard College in New York and a cognitive scientist, has some comforting words for people like me: The dread I’m feeling right now may be the height of my anxiety. Her research has shown that when people are worried about something, “it’s the time right before it happens, where you see most of the anxiety play out,” she says. This was confirmed by a study that tracked subjects’ brain changes when they were told they were going to have to take a math test. “We just tell them the math is coming, [and] that’s when we see areas of the brain that are involved in anxiety and pain being activated,” she explains. It’s the what-ifs that get you.

Though it sounds counterintuitive, Vaile Wright, a clinical psychologist and senior director of healthcare innovation at the American Psychological Association (APA), believes some re-entry anxiety is about losing what we gained during the pandemic. There have been some silver livings, she says, like the pleasures of having more time with family, or working with extreme flexibility, which makes it possible to look after other people or yourself. Giving that up now won’t necessarily be easy. That fear may partly explain why the American Psychological Association’s 2021 Stress in America survey found that about half of all Americans are feeling concerned about a return to in-person interactions after the pandemic ends.

Re-entry nervousness may be inevitable for many of us, especially with the virus and its variants still a threat. But the negative feelings can be managed, according to Beilock and others. Here’s how experts suggest easing your anxiety as we move forward.

It’s important to remind yourself that your reactions and fears are totally normal and respond with self-compassion, says Beilock. “When we think that maybe we’re the only ones feeling [negative emotions], we give them greater importance, and we worry about them even more. But we know that it’s normal to be worried about things that you haven’t done in a long time,” says Beilock. “Just narrating for ourselves that it’s okay to feel like that and we’re not alone can be helpful.”

Indeed, although we will all respond differently to the demands of a post-pandemic life, it has in many senses been a collective experience, which can also be a source of power that allows us to support one another. Now that we are all returnees, we can band together to improve the workplace cultures that we’re returning to.

2. Reframe your thoughts of catastrophe

Normalizing the anxiety doesn’t mean accepting all your most extreme thoughts, however, and letting them hijack your rational mind. To circumvent that possibility, Sherry Benton, a psychologist and founder of TAO Connect, a site that teaches users cognitive-behavioral therapy strategies, recommends a technique called reframing, which requires examining your fearful thoughts and separating what’s based in reality from exaggerations.

For instance, fretting because you pressed an elevator button or door handle and then brushed a hair away from your eye is likely unnecessary: the CDC recently updated its guidance to say the risk of surface transmission of Covid-19 is extremely low.

“It’s easy to get into unhelpful thinking, all-or-nothing thinking, catastrophizing,” says Benton. “One thing that you can do is to when you find yourself kind of escalating with thoughts that are just coming and coming and coming, and you’re ruminating, [is] try to slow yourself down. Maybe you can write out the thoughts that are coming to you and ask yourself: Is this realistic? Is this an exaggeration?” You can then try to modify your brain’s fear-soaked outputs to be more fact-based, she adds, so that “you’re not constantly producing more and more adrenaline.”

3. Get all the information you can

Running a gentle reality-check on your internal monologue will be much more successful if you can fill in the doubts with facts, which our brains prefer. Certainty may be scarce these days, but it’s important “to get every bit of information you can get from your company about what they’re doing to prepare, what precautions they’re taking, what they’re going to do to try to keep workers safe,” says Benton. “If you’re armed with good information that they’re taking it seriously and taking precautions, that provides a little bit of relief.”

For the millions of people globally who are struggling with the grief of having lost family or a friend to Covid-19, or are still traumatized by having recovered from it personally or having watched someone fall seriously ill from it, returning to work carries an extra layer of stress.

“[Y]ou may find yourself triggered anytime somebody gets a cold or the flu,” says TAO Connect’s Benton. “[I]t can be really useful to talk to a therapist or counselor to learn to separate which part of this is grief, and which part of this is your personal anxiety that you could modify to some extent.”

Grief cannot and shouldn’t be forcibly quelled. The goal instead should be to reduce the mental strain, she says, so that “you can get out there and function in the world when you need to.”

Beilock, also a believer in reframing thoughts that are not serving you, nevertheless acknowledges that this proven method won’t work when your thoughts are stuck on a fact, and not something imagined, that provokes fear or sadness. It could be that “you’re going back to a place where you had colleagues that are no longer there and the workplace could be a reminder of that,” she says.

In such cases, we can change the aspect of the situation we’re fixated on, she explains. As you return to the office, that might mean focusing on the people you’re excited to see, and the office rituals you’ve missed, despite painful realities that are impossible to change.

6. Ease your way into it

We’ve spent the past year rethinking how we move through every aspect of daily life to avoid spending too much time indoors with people outside our household. At some point, new routines developed, and it no longer became strange or even awkward to give other people a wide berth. The prospect of breaking those habits and reestablishing behaviors that may look similar to old ones might very well be daunting.

Remember that even if your company invites employees back for a few days per week, you’re probably not obliged to take them up on that offer straight away. Start with a single morning meeting and then go home again, Beilock suggests. Take the subway for a few stops on the weekend before your commute, and give yourself permission to ditch the train for a cab if you begin to feel too unsafe or overcome by anxiety when you’re underground. “We are better at getting over hurdles when we take them in small steps,” she says. With every successful dip into your in-person, back-to-work environment, you ought to feel stronger.

7. Watch for signs that you need to see a therapist

So how long should it take before your self-administered exposure strategy brings you to a stable place? Wright says that from a diagnostic point of view, psychologists would say that after a two-week period “if you’re finding that you’re just not even able to go in the workplace, you’re avoiding your workplace or you really are noticing performance issues—you’re daydreaming, surfing the web, not getting work done or that you’re not kind of taking care of yourself for others,” that would signal a problem. Or perhaps the way you interact with others is noticeably different—you’re snapping at colleagues uncharacteristically. “Those would all be red flags that it’s probably time to seek a professional to help manage your stress and anxiety,” she says.

Also, remember the basics of self-care: eating well, exercising, and getting plenty of rest and all the sleep you need, leaning on your support network of trusted friends, she adds. Learn to meditate or pick up mindfulness training, and practice things like diaphragmatic breathing, or go out for a short walk around the block, to run your own intervention when you feel panic rising.

8. Practice what you’ll say to protect your boundaries

Part of maintaining a cool head at work may mean planning ahead for a possible source of strife: that colleague who isn’t taking the pandemic and safety guidelines seriously, for whatever reason. This person believes it’s possible to spring back to pre-pandemic meeting huddles, handshakes, and intimate, gossipy conversations that demand close proximity. Benton says that many people may find themselves sitting next to someone who has no empathy for another person’s fears or grief.

This is a nightmare scenario for people who are conflict-averse and may not push back in the moment, despite the alarm bells going off in their head. The solution is to plan ahead, says Benton. “What would you say and how would you say it to try not to trigger defensiveness in the other person, but just own that this [boundary] is yours and it’s important?” When you figure that out, practice it.

It’s also a good idea to make a plan for what you’re going to do if the confrontation doesn’t go well, she adds. Your next step could be to talk to a manager or to request a change in seating or other arrangements that might help you feel safer.

9. Talk about trauma and re-entry anxiety

The worst thing anyone can do—as a manager or concerned co-worker—is pretend that people aren’t feeling anxious or emotional. “You don’t have to have in-depth therapy sessions, but also avoiding the topic is probably not helpful,” says Benton. And companies that don’t take employees’ stress levels seriously will find that staff will vote with their feet as soon as they can, she predicts.

Managers and leaders can help normalize re-entry anxiety by talking about their own feelings about it. And they will want to check in regularly, not only once, asking employees what they need to deal with what has happened in the past year and the reentry situation, says Lorna Borenstein, a workplace well-being expert and founder and CEO of Grokker, a site that offers health and wellbeing instructional videos for employees and individual customers. They also ought to check their mental health benefits to ensure that employees can reach professionals and other tools to deal with stress when conversations at work just aren’t enough.

Borenstein also advises companies to create or bolster their support of employee resources groups (ERGs), whether for Black employees or other people of color, or caregivers and parents at work, and other populations hit hard by the pandemic, so that people will have space and time to speak about their experiences and anxieties with each other. One of Borenstein’s corporate clients provides the coffee and snacks for its 15 ERGs, which sends a message, she says. “If your employer is setting up a resource group, for you to come to, it tells you, we know that this is tough and there’s a community of you here in our population, and we want you to support one another. We support that.”