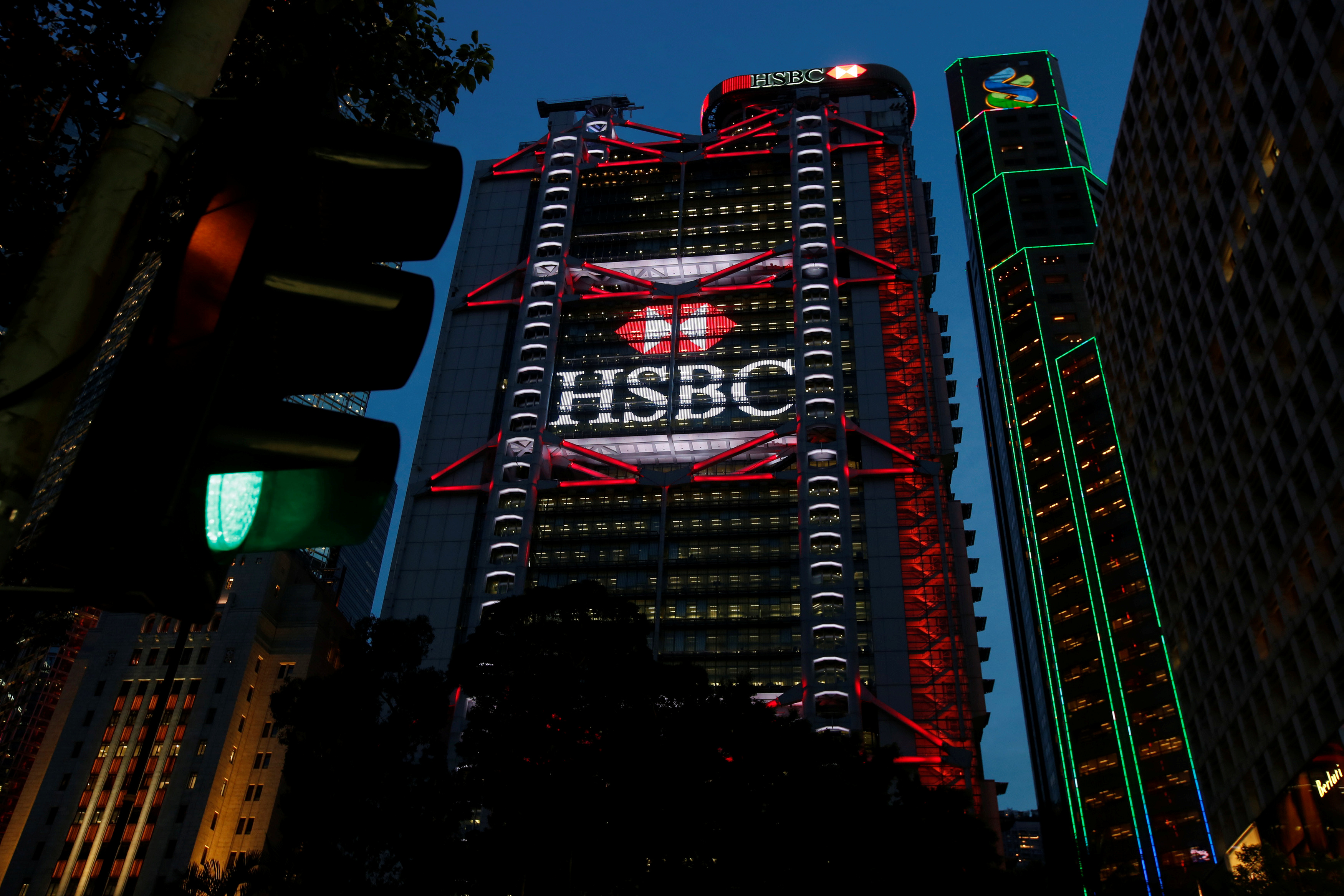 When Ted Hui arrived in the UK last December after fleeing Hong Kong, he had a rude shock: not only was his HSBC bank account frozen, but his bank balance was at zero. The opposition lawmaker couldn’t transfer money, nor take out cash from an ATM. Accounts belonging to his wife and parents, who also left for the UK, were frozen, too.

A key figure in Hong Kong’s democracy movement who took on a visible role as a frontline mediator during the protests in 2019, Hui had feared something like this would happen. “I didn’t expect that they would do it so quickly, and I didn’t foresee that they would do the same to my family,” he said.

Soon after, his account was inexplicably partially unfrozen, and he quickly transferred funds out of HSBC. Then the account was frozen once more.

In recent months, HSBC has found itself under intense pressure from politicians in the West who accuse the bank of facilitating China’s authoritarian crackdown on Hong Kong.

Few financial institutions are as embedded in both China and the UK as HSBC, which was founded in Hong Kong and Shanghai in 1865 in the opium trade era, and has been headquartered in London since 1993. But what was once a strength is increasingly a liability as tensions between China and the West deepen. The bank, which makes the bulk of its profits in Hong Kong, and whose name is even on the city’s money, has to keep Beijing happy—but it must also be answerable to politicians in Britain.

Faced with rival demands for loyalty, HSBC may soon have to seriously consider an uncomfortable question: will it have to split itself in two? It’s a prospect that’s already being openly discussed.

At a tense UK parliamentary grilling last month over HSBC’s actions in Hong Kong, lawmakers asked the bank’s CEO Noel Quinn whether there was ever a red line that the Hong Kong government could cross that would compel HSBC to leave the city, or spin off the bank’s China operations. Quinn was unequivocal on both counts: No.

Nevertheless, when HSBC updates investors on its earnings and strategy tomorrow (Feb. 23), analysts will be looking for indications of how the bank plans to navigate this geopolitical tug-of-war—and whether there might come a time when the bank has to silo its businesses as Beijing increasingly demands that both Chinese and foreign firms toe the line.

The choices facing HSBC are an indication of what’s in store for the many financial institutions and multinationals that have benefited from China’s rise while avoiding scrutiny in the West.

Will HSBC be forced to break up?

HSBC is no stranger to political PR crises. It faced one last year when it publicly supported a restrictive national security law imposed on Hong Kong by Beijing.

Then came US sanctions on Hong Kong and Chinese officials for their roles in the crackdown on protesters, creating a quandary for HSBC and other banks: failure to enforce the sanctions could bring huge fines, yet enforcing them could mean violating Hong Kong’s security legislation. (So far, local banks have followed the sanctions, and senior officials including chief executive Carrie Lam and the head of the police’s national security unit have said they are now restricted to using cash.)

The bank’s business model is built on being a conduit between east and west, said Kelvin Lam, a district councilor in Hong Kong and a former HSBC economist. That means it needs to “please the governments of the West, and also the government of China, in order to survive.”

But a lucrative strategy of placating both sides seems to have run its course.

While it’s not the only major bank to get embroiled in geopolitical tensions over Hong Kong—US-based Citibank and UK-based Standard Chartered have also helped Hong Kong police with their investigations of pro-democracy activists—HSBC is in a unique position. It’s the largest retail bank in Hong Kong and Europe’s biggest bank; it issues currency in Hong Kong and settles US dollar transactions between different banks; and it has a track record of serious financial transgressions. Most notably, it spent five years under probation by US authorities from 2012 to 2017 and paid $1.9 billion in fines for being too lax on money laundering and allowing clients to evade US sanctions in countries like Iran, Libya, and Sudan.

Now, it faces a more difficult test of dual loyalty between the world’s most powerful economies. One way out of this impossible situation, experts say, is to restructure HSBC.

In the most extreme scenario, HSBC could end up “splitting in two, with HSBC West listed on the London Stock Exchange and HSBC East listed in Hong Kong,” said Tom Keatinge, director of the Centre for Financial Crime and Security Studies at the London-based think tank RUSI.

A decision like that should only be taken because it makes more sense for the business, the former HSBC executive said, and not because of political pressure. “It depends where you make the money,” the executive added. As of now, HSBC makes its money in Asia—Hong Kong counted for 90% of its pre-tax profits in 2019.

Short of a dramatic split, HSBC could reconfigure itself in ways similar to what banks did to prepare for Brexit, that is “moving a lot of operations and certain business lines to other cities,” said a Hong Kong-based legal and compliance expert. “You don’t restructure the bank per se, you just reallocate resources and people and infrastructure to other places.” HSBC is considering moving more top executives to Hong Kong, according to reports this week, as it seeks to expand its wealth management business in Asia. In that vein, HSBC could also consider a change of headquarters from London to Hong Kong or even Shanghai, although the board of the bank decided against such a move in 2016. But circumstances have changed.

City University of Hong Kong law professor Wang Jiangyu noted that while a split of the company may offer limited protection from legal repercussions—HSBC entities operating globally are in any case incorporated in different jurisdictions—moving headquarters to Hong Kong could limit the reach of US authorities in some instances, while also winning favor in China. And the potential for more business. According to the compliance expert, HSBC faces the prospects of “not being a go-to bank for the capital markets activity of the big Chinese companies” because of political reasons.

The bank is reportedly also considering selling its struggling US retail business (paywall) and is already planning to pull back from Europe. But a partial sale wouldn’t insulate HSBC from the long arm of US compliance: If it keeps even a single branch open in New York to handle private clients, “the US government has all the leverage and legal enforcement powers they need” to pursue charges, said the compliance expert. And even without a physical branch, the US would have that leverage thanks to its currency’s dominance in Swift, the global money transfer system.

HSBC didn’t respond to questions from Quartz for this story.

If HSBC were to spin off its China operations, it wouldn’t be the first bank to reconfigure its ties due to a changed political situation. In the 1980s, the British banks Barclays and Standard Chartered pulled out of direct operations in South Africa amid global pressure against the apartheid regime. The bank’s actions “highlighted…the fact that financial institutions were not unassailable when faced with public pressure on ethical issues,” wrote one historian.

Another option is to do nothing. Ultimately, being accused of moral bankruptcy for aiding Beijing’s crackdown in Hong Kong may be more about political theater than actual business impact. It’s why the compliance expert believes “this will all blow over.”

But much as HSBC would rather focus on its bottom line rather than its allegiances, there are scenarios in which doing nothing is not an option. The UK could decide to show that it’s being tough on China by cracking down on HSBC, as could the new Biden administration, by directing the US justice department to sanction the bank.

Beijing also has the tools to force HSBC to pick a side. Last month, China’s commerce department issued new rules that would prohibit Chinese companies from complying with “unjustified” foreign sanctions, adding yet another headache for multinationals operating in China, on top of Hong Kong’s vague security legislation. For example, HSBC could in theory be sued in China if it applied further sanctions imposed by UK or US courts on Chinese companies or officials under the rules.

“This is a real risk according to China’s new blocking statute,” said Henry Gao, an associate professor of law at Singapore Management University who focuses on trade issues. To be sure, the new rules may not be invoked in full. “However, there could always be cases where China wants to ‘kill a chicken to warn the monkey.’ Thus, from a risk-control perspective, it would be a good idea for Western firms to try to segregate their China operations from the rest of the world,” Gao said.

“Nobody asked us questions”

It was arguably a single signature, scribbled on a clipboard at a streetside stand, that cemented Hong Kong activists’ distrust of HSBC.

In late 2019, protesters against China’s growing power in Hong Kong had already targeted local HSBC branches after the bank froze millions of dollars crowdfunded to support the movement, helping pay for things like legal fees and bail money. Angered by what they saw as the bank’s cooperation with authorities, they vandalized HSBC ATMs, and set one of the bank’s iconic bronze lion statues in front of its iconic Norman Foster-designed Hong Kong office on fire.

Months later, HSBC’s Asia-Pacific chief executive Peter Wong threw the bank’s weight behind Beijing’s sweeping national security law for Hong Kong, when he stopped at a street booth to publicly sign a petition in support of it.

Meanwhile, the bank is also ensnared in the convoluted web of the US extradition case against Meng Wanzhou, the CFO of Chinese tech giant Huawei who’s currently under house arrest in Canada. HSBC provided information to US authorities that led to Meng’s arrest, and subsequent indictment for alleged violations of sanctions on Iran. Her legal team claims the information of Huawei dealings with the bank that the US is relying on is incomplete and recently sought unsuccessfully in a UK court to get access to internal HSBC documents.

Now add to this the immense political blowback HSBC has received for freezing the accounts of Hong Kong activists like Hui, as well as those of other political activists, and media executives at the pro-democracy newspaper Apple Daily.

How, as one politician asked the bank’s CEO during last month’s parliamentary hearing, can HSBC determine that an order from authorities to freeze an account is legitimate, “rather than being…a political request”? Or, as another lawmaker put it more pointedly to Quinn: “you are making ethical judgments in Hong Kong; it is just you are making the wrong ethical judgments.”

For the former senior HSBC executive, the scrutiny marks a dramatic departure from the past.

“In the 1970s, we received pages after pages of names whose accounts we either had to freeze or stop transactions,” recalled the executive. “And nobody asked us questions.”

And in the 1990s, as Britain prepared to hand over Hong Kong to Chinese rule, HSBC had clear instructions for its employees to steer clear of politics, said the former executive.

“In those days whatever questions there were approaching 1997, naturally people would ask: ‘What’s your view, are you scared that the Communists are coming?’ And our guidelines were to never talk about politics,” he said. “Of course, now nobody in the bank can say we don’t talk about politics.”