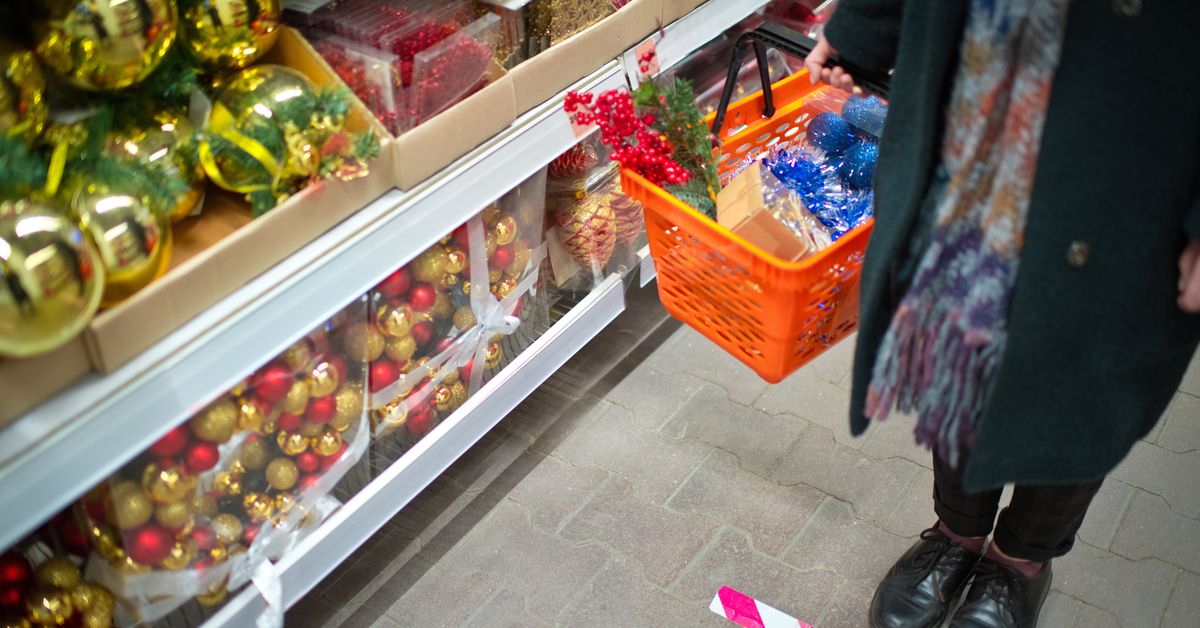 If you’ve ever worked in retail, you already know what I’m about to tell you: Around the end of October, a sense of horror begins to build that has nothing to do with Halloween. As the days grow shorter and the wind grows colder, coworkers begin to whisper to each other, “Are you ready?” The piped-in music changes, the decor shifts, everyone — regardless of their place in the corporate hierarchy — takes on the grim affect of people bracing themselves for the worst: The holidays are coming.

I’m not sure what it is about the holidays that makes so many people behave so horribly. Maybe it’s the pressure to make the day perfect, or the stress of dealing with one’s family. At this point, I’d be unsurprised to learn that Christmas music activates some kind of dormant aggression impulse.

This year’s holiday season promises to be even more intense for service workers, particularly those in the grocery industry. As the Covid-19 pandemic rages on, people are more stressed than ever and are experiencing fewer moments of kindness and joy to temper their worst impulses. It’s one reason why this year, as someone who has worked through every holiday season for essentially a decade, I urge everyone to stay at home. You might think of the holidays as a wonderful time, a time when people come together and celebrate love, happiness, and joy. But I know the truth. The holidays get ugly.

Two years ago, I was plucked from my position in the deli department of a high-end grocery retailer to be part of the small team that managed our store’s holiday orders. A year later, having proven myself capable of keeping my head no matter how absurd the customer behavior became, I was put in charge of the program. Both years, I worked impossibly hard from the first week of November until Christmas Day, answering questions, taking orders, solving problems, and encountering countless people who, in a sort of holiday-driven derangement, had utterly forgotten how to behave in front of others.

I have been screamed at over pumpkin pies and Yule logs; I have watched grown men weep over the size of their rib roasts; I have been cussed out by a woman who believed her fresh raw turkey, still in its clearly labeled package, was a large chicken with which I was trying to trick her. I have seen people come to blows over the last box of turkey-shaped butter, and witnessed a breakup started by the simple question, “Green beans or green bean casserole?” I have had to explain to at least four separate people that the reason their turkey didn’t taste good is because they put it in the oven without taking the plastic wrapping off.

My favorite holiday story, the one I used to tell at parties in the days when parties were still safe to attend, is this one: Three days before Thanksgiving, a woman came in and demanded to place an order for Thanksgiving Day. I explained to her that we were past the cut-off point for ordering, but she insisted that she needed accommodation and couldn’t possibly pull off a proper meal in three days’ time. I took pity on her, moved some things around, and forced through an order for a pre-cooked dinner for six. “Can I pick the food up hot on Thanksgiving?” she asked, and I explained, as patiently as I could, that we were filling more than 1,000 orders and just didn’t have the facilities to allow for any food to be picked up hot. It clearly wasn’t her dream scenario, but we agreed that her husband would come pick up her order, cold, two days before the holiday.

On Thanksgiving Day, two days after her husband picked up her order, she called me. In a voice so loud I had to hold the phone an inch away from my ear, she screamed, “My food is cold!” I’m not sure how she imagined the food would be hot when she removed it from her own refrigerator, but she yelled at me for 10 more minutes before eventually hanging up on me.

Perhaps I should have suggested she share the holidays with another customer who hated the thought of properly reheating his already cooked food: the man who wanted instructions for how to reheat a precooked prime rib in his microwave. When I, carefully, informed him that microwaving his prime rib (a cut of meat for which he paid more than $100) would never yield any positive results, he demanded, “So what am I supposed to do, turn on my oven?”

Still more frustrating were the people who placed enormous orders and simply abandoned them, fully paid, at our store. An order of four sushi trays was left to languish on Thanksgiving Day; at Christmas, a customer sent me straight to voicemail when I called to inquire as to why he had not come to get the five pounds of shrimp cocktail he’d purchased weeks before. (I’m grateful to that one — the shrimp were delicious.)

Then there were the emotionally fragile customers who were clearly going through it back at home. My booth was set up where we usually kept the cheapest wine we sold and, that season, no fewer than five people came by and burst into tears when they saw that I was there instead. One poor guy came in on Thanksgiving and told me that his wife had a baby last week and that she and her sister had a fight that had been brewing for 10 years and now he and she were uninvited from dinner. “She’s crying. A lot. Please … I need a turkey.” (I managed to find him one.)

But the holidays are going to be different for many of us this year. As Covid-19 cases climb across the nation, the pandemic has recast our traditions of gathering with family as deadly, dangerous events that are best avoided. I know how much that hurts, especially in such a difficult time. We all want a little normalcy. We all want a little joy.

But there is one group of people for whom the holidays are always, always terrible: service workers. Every year, we see the worst of humanity. Every year, we are treated as though we are worthless, as though we are less than people. We work on Thanksgiving, on Christmas, on New Year’s Eve and Day, getting screamed at and belittled while you make fond memories of family togetherness and love. Despite our unfairly low pay, our terrible or nonexistent health insurance, and our desire to be with our own families, we paste on a smile, take your abuse, and help you anyway, because that is our job, and we don’t have any other choice.

I am no longer working at the grocery store where I put in so much of my time and effort (I am high-risk for Covid-19 and decided against it this year). But my friends who are on the front lines of the holiday rush say things have been impossibly difficult this year. People are still ordering holiday dinners, although this year, the hot item is the smallest possible turkey rather than the large ones folks used to fight over in years gone by. The cognitive dissonance those workers are experiencing — being taken to task over the size of a turkey while worrying if their exposure to the public means they won’t live to see another holiday season — sounds unbearable.

Stay home for the holidays this year. It’s not only the right thing to do for your own safety, the safety of your family, and the safety of every American; it’s also the only way to protect the service workers who have suffered many terrible holiday seasons and will inevitably suffer many more. And if you find yourself out and about, then please: Be kind to every service worker you meet, wherever you meet them. As hard as this year’s holiday season has been for you, it has almost certainly been even worse for them. They’ve likely been working day in and day out at constant risk of exposure, unable to afford to take time off, absorbing the frustration and aggression of customers who are struggling, too.

Working on the holiday order team in years past wasn’t all bad. I still think fondly of Elizabeth, a regular customer of mine, who, a few days before Christmas, slipped me a $25 gift card and thanked me for all my hard work. I also helped a new grandfather last year, a warm and wonderful man who was trying to make an early Thanksgiving work as his daughter, son-in-law, and newly born grandson would be out of state on the actual holiday. I was able to pull together a full dinner for him well before the bulk of our Thanksgiving food was set to arrive, and a few days later, he came back into the store just to thank me and show me photos of the wonderful holiday they’d been able to pull together with my help. Moments like that almost made the horror stories feel worth it — that is, until the screaming inevitably started back up.

So give service workers the gift of kindness — or really, just decency — this holiday season. I promise you it will come as a welcome surprise.

Dylan Morrison is a writer based in Cleveland, Ohio. His work focuses primarily on trans rights, food, and being kind to service workers. He is also the author of the novel Juniper Lane (2016). You can find him on Twitter at @dylan_thyme.

How to switch phone carriers

How Mumbai airport is preparing to transport the Covid-19 vaccine

Does India need to give its entire population the Covid-19 vaccine?