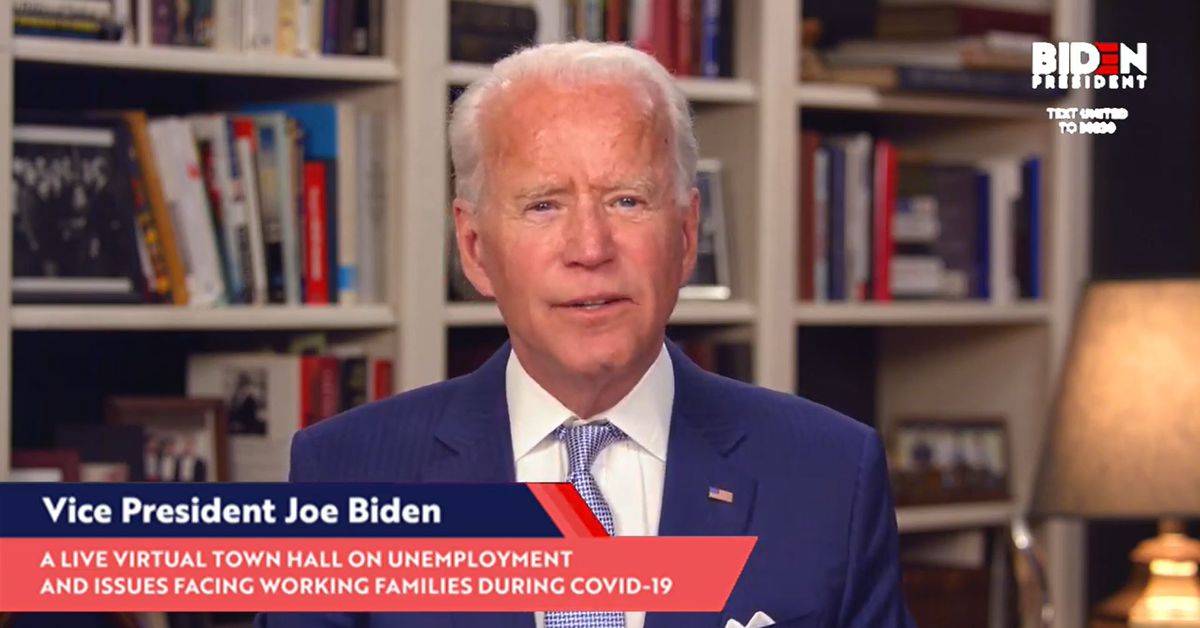 Former Vice President Joe Biden, now the presumptive Democratic nominee for president, has been getting mixed reviews on his handling of the coronavirus outbreak.

Some Democrats see him providing a steady, measured presence during a chaotic time when the Republican White House is offering muddled information and outright lies. But others wonder if Biden should be doing more to establish himself as a much-needed source of national leadership.

No longer able to hold in-person events and rallies, Biden has turned to television, livestreams, and a new podcast to get his message out as people struggle with the effects of this illness and its impact on the economy.

“[I’m doing a] whole lot of virtual interviews,” Biden told Jimmy Fallon during a virtual appearance on The Tonight Show in early April. “I’m not going out, I’ve been keeping my distance from folks when they come in.”

Since the beginning of March, Biden has participated in more than 40 television and radio appearances, according to his campaign. He’s also held livestreams from his home, conducted YouTube town halls and debuted a podcast that includes interviews with Michigan Gov. Gretchen Whitmer and former White House Ebola czar Ron Klain. This week, Biden published a New York Times op-ed laying out his proposal for how to eventually reopen the country.

For some, these efforts are working. “I think they’re doing all the right things,” says Jim Manley, a former staffer for Senate Majority Leader Harry Reid, of Biden’s campaign. “He’s studying his briefing books and talking to experts, and talking to the Hill about different plans.”

“I don’t think he needs to go out every day, like Trump, just to say something,” Manley says.

Some think he could stand to be more aggressive.

“He should be as present as Trump at this point, as present as someone like Cuomo, and he really hasn’t filled that space yet,” says Monica Klein, a progressive Democratic strategist and co-founder of Seneca Strategies. “Instead, there’s a vacuum in Democratic leadership at a national level.”

Other Democratic leaders like New York Gov. Andrew Cuomo and California Gov. Gavin Newsom, meanwhile, have emerged as more prominent voices and sources of information about the coronavirus. (Cuomo and Newsom are both holding regular briefings because of their roles overseeing the New York and California responses.)

At one point in mid-March, Biden had yet to ramp up his outreach and messaging, and his absence was so notable that the hashtag #WhereIsJoe began picking up momentum on Twitter.

Biden, of course, has a fine line to tread. If he was perceived as taking advantage of the situation politically, that might read as a bit too opportunistic in a time of national crisis. Seeing as how Biden’s polling has been relatively strong lately, there’s also the argument that Trump’s own actions are hurting him so much that letting him self-implode could be more effective.

Still, for a candidate making the case that he — not Trump — should be in the White House, Biden may need to raise his profile and provide a starker contrast to the president.

What Biden has done so far

Since early March, Biden has worked to build more of a presence on a variety of platforms, including on traditional television outlets. He’s done interviews on a number of shows such as CNN’s Cuomo Prime Time, NBC’s Meet the Press and NBC’s The Today Show.

As the outbreak has worsened, Biden’s interviews — which have taken place from a makeshift studio his team has set up in the basement of his Wilmington, Delaware home — have modeled social distancing efforts, though they’ve been somewhat limiting in their tone.

These interviews have centered heavily on how Biden would approach the pandemic, including a recurring call on Trump to fully capitalize on the Defense Production Act, which would force private companies to prioritize government orders of protective equipment like masks and gowns, and medical supplies, including ventilators.

Thus far, Trump has been reluctant to use the full power of the DPA, even though it’s an authority that could help expedite the production of key goods. In one instance, he announced that he would use it to pressure General Motors to produce more ventilators, an approach that Biden thinks should be expanded to a wider array of industries.

In addition to an emphasis on the DPA, Biden’s plans for fighting the virus include a push to ramp up drug testing, the reopening of enrollment into Obamacare and a focus on gathering more demographic data about who’s being affected by coronavirus.

On today’s edition of #WhereIsJoe:

Biden has used his press appearances to push back on Trump’s mishandling of the pandemic, too, though critics argue that his statements could stand to be more forceful.

In some of the latest ads and interviews, Biden has sought to draw a contrast with the president by highlighting how it’s important to be honest about the dire nature of the crisis and what it really takes to respond to it. Although Biden first sounded the alarm about the need for a coordinated response to the virus in January, Trump has continued to downplay its effects and overstate the number of resources the US has to address it, for example.

“The first thing we should do is listen to the scientists. Secondly, we should tell them the truth. The unvarnished truth,” Biden said during a Meet the Press interview in late March. “Choose truth over lies,” one of his ads emphasizes.

These efforts have garnered praise from some Democrats.

“Biden is speaking directly to what needs to be done and steps he would take in this crisis, like using the Defense Production Act, tracking infection, testing, and mortality data by race so we understand the disproportionate threat this virus is having on the African American community and communities of color,” says Alaina Beverly, the former associate director of the Office of Urban Affairs during the Obama administration.

Questions remain about whether Biden should be doing more

Despite Biden’s actions, there’s still a sense that he hasn’t emerged as a leading national voice on the subject of coronavirus, even as Trump holds regular briefings.

Some of the criticism is likely driven by the fact that Trump’s briefings get extensive media coverage, given his role as president, while Biden’s appearances have seemingly gotten far less. “If networks don’t take him live, I can’t see those briefings being terribly effective,” a Biden ally told the Hill.

Additionally, because of the deluge of news across the board — there’s not much information that’s breaking through right now. One of the more popular videos from Biden’s YouTube channel in recent weeks had received just under 200,000 views on the platform, for example.

“Nothing political is going to pop in the same way that’s going to pop before because we’re facing the scariest thing that we’ve encountered in our lifetimes,” says progressive strategist and founder of New Deal Strategies Rebecca Katz.

That said, there are outstanding questions about whether Biden’s efforts are enough to demonstrate his strength as a national leader during a crisis when the country sorely needs one.

The questions center both on the frequency and accessibility of his appearances — as well as on the content of his messaging. Although Biden has significantly increased his efforts on television and in digital media as well, there’s still a perception from some that he hasn’t established himself as a clear Democratic point person during this crisis.

According to a recent Business Insider survey, respondents saw Biden as more trustworthy on coronavirus than Trump, but not as trustworthy as Cuomo or Newsom.

As Rep. Emanuel Cleaver, a Biden supporter, told Fox News last week, Cuomo is a key person people have looked to on the Democratic side. Cleaver noted, however, that he doesn’t see Cuomo’s role affecting how Biden is seen.

“The history books will record that the person who was most instructive on this [coronavirus] issue in the country is Andrew Cuomo,” Cleaver told Fox News, adding, “The amazing thing is the whole country is now tuning in to Andrew Cuomo.”

Even though the usage of the #WhereIsJoe hashtag has died down, concerns also continue to linger about how exactly Democratic leaders in addition to Biden are providing concrete support and guidance to people who are dealing with everything from recent layoffs to exorbitant medical bills.

“A frequent criticism I’m hearing is: Where is the Democratic Party in being a source of support?” says voter engagement strategist Nick Chedli Carter. “I don’t think that it’s a stretch that people are hoping for more of a presence in communities.”

Additionally, there’s an ongoing question of whether Biden’s messaging has been confrontational enough when it comes to pushing back on Trump’s lies. Although Biden has said that the president needs to act more like a “commander-in-chief,” his attacks on Trump haven’t always been that explicit. As Vox’s Matt Yglesias reported, during his Meet the Press interview, for example, Biden refrained from agreeing that the president had “blood on his hands,” because of Trump’s response to the coronavirus.

This approach could well be driven by the need to avoid the appearance of playing politics during a national crisis, and the downsides of going after the president, who’s seen a public opinion bump in recent weeks. In deciding not to more clearly set himself apart, however, Biden could be undercutting the argument that he presents a much better option for voters in the fall.

“As for the risk that Biden might alienate Trump supporters he’d like to win over with his criticisms, the deeper risk is that Biden fails to condemn Trump strongly enough for those voters to perceive a real reason to abandon him,” Osita Nwanevu wrote for the New Republic in early April.

Sen. Bernie Sanders’s decision to suspend his presidential campaign and endorse Biden puts the focus on the former vice president even more. As the standard bearer for the Democratic Party, Biden has an opportunity to truly demonstrate his leadership during this difficult time — but he needs to take it.

What’s next for BioWare? | GamesBeat Decides 175