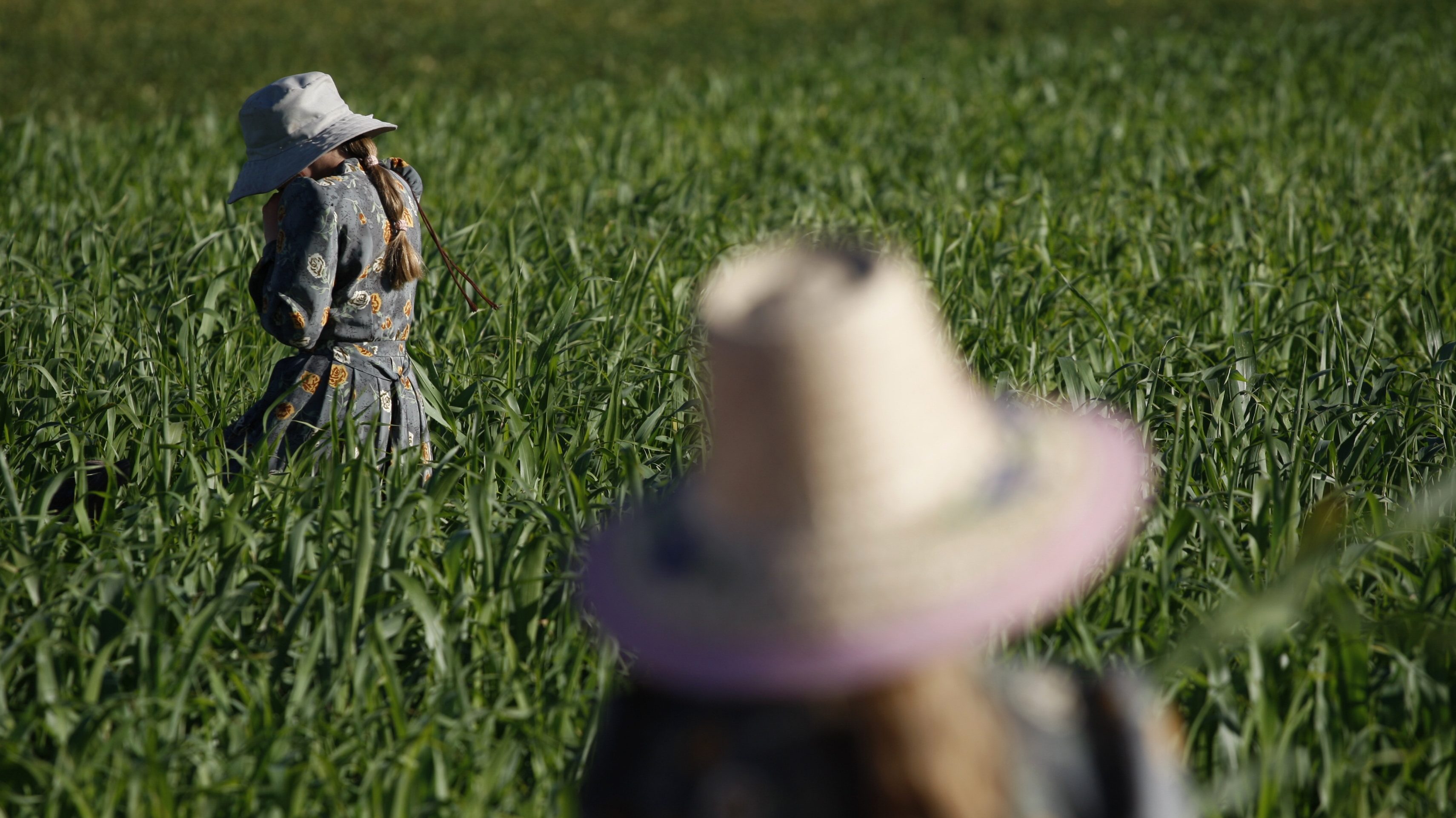 A group of would-be kidnappers posing as Mennonites in an attempt to snatch five children from their families tracked their movements using a drone, according to a newly-unsealed court document.

It’s a dystopian tale in which a young couple—unable to have their own child—tried to steal someone else’s, using the latest technology against an old-line religious order that largely eschews modern conveniences. The new document, a search warrant application filed by the FBI under seal at the end of January, reveals previously-unknown details about the bizarre 2018 plot, which involved Frank Jesse Amnott, a registered nurse in Pensacola, Florida; Amnott’s wife Jennifer, a hospital coordinator who also worked as a doula; a high school lacrosse coach; and a Maryland woman masquerading as a secret agent.

Frank and Jen Amnott desperately wanted to start a family of their own but weren’t able to conceive.

Then, in 2014, they befriended a behavioral analyst from Maryland named Valerie Perfect Hayes. Hayes convinced the couple she was a covert operative for the British intelligence services, and could help them adopt a child who had been neglected or abused. The Amnotts paid Hayes thousands of dollars to do so, but Hayes never fulfilled her promise.

In July 2018, Hayes— now living with her boyfriend, a lacrosse coach named Gary Blake Reburn—called the Amnotts and told them that Mennonites in Virginia’s Shenandoah Valley has kidnapped three of her children—Ronin, Leona, and Zippy. She said they were being held in two separate houses by two different families. Hayes asked the Amnotts for help in recovering her kids, along with two other, unnamed children she said were also being held captive. None of this was true. Hayes was in no way related to any of them, though she did have kids of her own.

Hayes told the Amnotts that if the mission succeeded, they could keep one of the children for themselves. Anticipating success, Frank and Jen named their family-member-to-be “Caleb.”

There have been 140 infants kidnapped from their homes by non-family members between 1964 and 2019, according to data collected by the National Center for Missing and Exploited Children, a private nonprofit established by Congress in 1984. The organization says the “typical” kidnapper is someone who has lost a baby, or is incapable of having one. Some children are recovered quickly. Others can go decades believing their abductor is their biological parent. This is not a crime of greed, nor a crime of vengeance, said judge P. Kevin Castel before sentencing a Connecticut woman to 12 years in prison for kidnapping an infant in 1983, but “a crime of selfishness” that “inflicted a parent’s worst nightmare on a couple.”

Not long after Hayes’ phone call, Frank Amnott drove to Dayton, Virginia with Hayes and Reburn. It was previously reported that they surveilled two families, keeping in touch by phone with Jen, who stayed behind in Maryland. According to the FBI’s new filing, Amnott and Hayes were tailing a third family too.

The FBI filing also includes text messages sent between Hayes and the Amnotts, in which Hayes suggests the two buy clothes for “Caleb” in advance of the abduction. In one, Jen floats the idea of waiting until after they have kidnapped the boy. In another, Jen texts Frank about an outfit she found on clearance, wondering if it would fit the child they were planning to kidnap.

Things were taking longer than expected, and the group twice delayed the caper. Jen texted Frank that she was “terrified” about going home “empty handed.” Frank replied, “Have a solid plan for the morning and we will see you with everyone in the morning.”

On the morning of July 29, Frank texted Jen to say there had been a slight change of plans.

“What?! What now?” she wrote back. “Please please don’t tell me it’s delayed another day again. We can’t keep doing this.”

Frank assured Jen the kidnapping would still be taking place that day, just later in the evening.

“Just make sure you come home,” Jen responded. “And please bring our son.”

While the first family was at church, Hayes and Reburn broke into their home to familiarize themselves with the layout. Hayes stole a dress and a cardigan to use later as a disguise. She said she already knew the floor plan of the second house, as she previously visited under the ruse of being an investigator with the US military looking for a soldier who had gone AWOL.

That evening, someone using the name “Bjorn Rassmussen” appeared in the text exchanges and, according to the FBI filing, “took the lead on surveillance. Bjorn was being assisted by another individual named ‘Wheeler’ who apparently was using drones to conduct surveillance.”

In a group text, Reburn asked: “B[jorn] what’s going on. Any intel from wheeler and drone activity[.]” Later, Reburn texted, “We need Intel from you and wheeler. We are going in tonight…at dusk or just before. The same game plan as last night.”

As night began to fall, Hayes texted Bjorn, “Okay ready for intel ASAP please, sun is setting now. Everything you have then we will work with it.” Bjorn replied to the group, “Okay so only one couple at the big house…no one supposed to come by but still do quick.”

He advised the others that, unlike some Mennonites, one of their target families had a telephone and could potentially use it to call police. Bjorn also suggested looking in the sewing room for “sleepy medicine tablets” the group could give the children to make things easier on themselves.

“To date, law enforcement is still investigating the identities and the extent of the involvement of ‘Bjorn’ and ‘Wheeler,’” the FBI warrant application says.

Shortly before 11:30pm, Hayes showed up at the first house disguised as a Mennonite. The father opened the door and saw Frank Amnott standing behind Hayes, holding a gun. Amnott and Reburn, who was also armed, forced their way inside and escorted the father to the basement, where they forced him to the floor and bound his hands with zip ties. Hayes and Reburn went upstairs to find the children.

Jen Amnott, still in Maryland, kept in close touch with the rest of the group by phone during the operation.

As all of this was happening, the mother had managed to run outside and call 911. When a sheriff’s deputy showed up, Hayes, who was now outside with Reburn, claimed to be a helpful bystander who said she witnessed an armed man run into the house.

The mom, who is identified as “Parent B” in the FBI filing, “was too frightened to tell the…deputy that these people were involved in the offense fearing that they might shoot him.”

Thinking that Hayes and Reburn were just helpful neighbors, the deputy asked them to drive the mother to a nearby convenience store where she would be safe. After dropping her off, Hayes and Reburn disappeared.

They never made it to the second home.

The deputy first retrieved the two kids, then discovered the father on the basement floor. Frank Amnott was hiding under the stairs, pointing a gun at the dad. Amnott was arrested and brought to the county jail.

Investigators then began piecing together the events, reviewing the phone calls Amnott was making from jail. One of the numbers he had called was Jen’s. When local detectives called her, Jen was “evasive,” and said she “was in a location at which law enforcement could not get to her.”

Jen texted Bjorn, begging him to “find a way to delete [Frank’s] fingerprints if you can.” Two days after the foiled kidnapping attempt, Jen texted Hayes saying, “I literally don’t know what to do…All I can think is I’m never seeing him again.”

The FBI subsequently reviewed Hayes’ Facebook page, where they saw posts indicating she and Reburn were actually living in England. This was corroborated by travel records from US Customs and Border Protection, which showed the two fled the country on Aug. 7 with Hayes’ ex-husband and two of their four (actual) children. A week earlier, Jen Amnott had flown from the US to Ireland, where she was denied entry after providing “conflicting statements” to immigration officials. According to the FBI, Jen flew back to the US, then caught a flight to Iceland.

A few months after that, Hayes, Reburn, and Jen Amnott were picked up by authorities in Glasgow, Scotland, where they are now awaiting extradition. Court filings do not explain how they got there. Reburn’s Mercedes was eventually located at a Maryland self-storage facility. Inside, FBI agents found, among other things, infants’ clothes, baby bottles, baby wipes, toys, a car seat, and a receipt for a generic brand of nighttime cold medicine.

Frank Amnott pleaded guilty last December and is scheduled to be sentenced May 26. His lawyer, Aaron Cook, told Quartz he expects the hearing to be postponed. Amnott faces a maximum sentence of life in prison. No US charges have yet been filed against the other three.