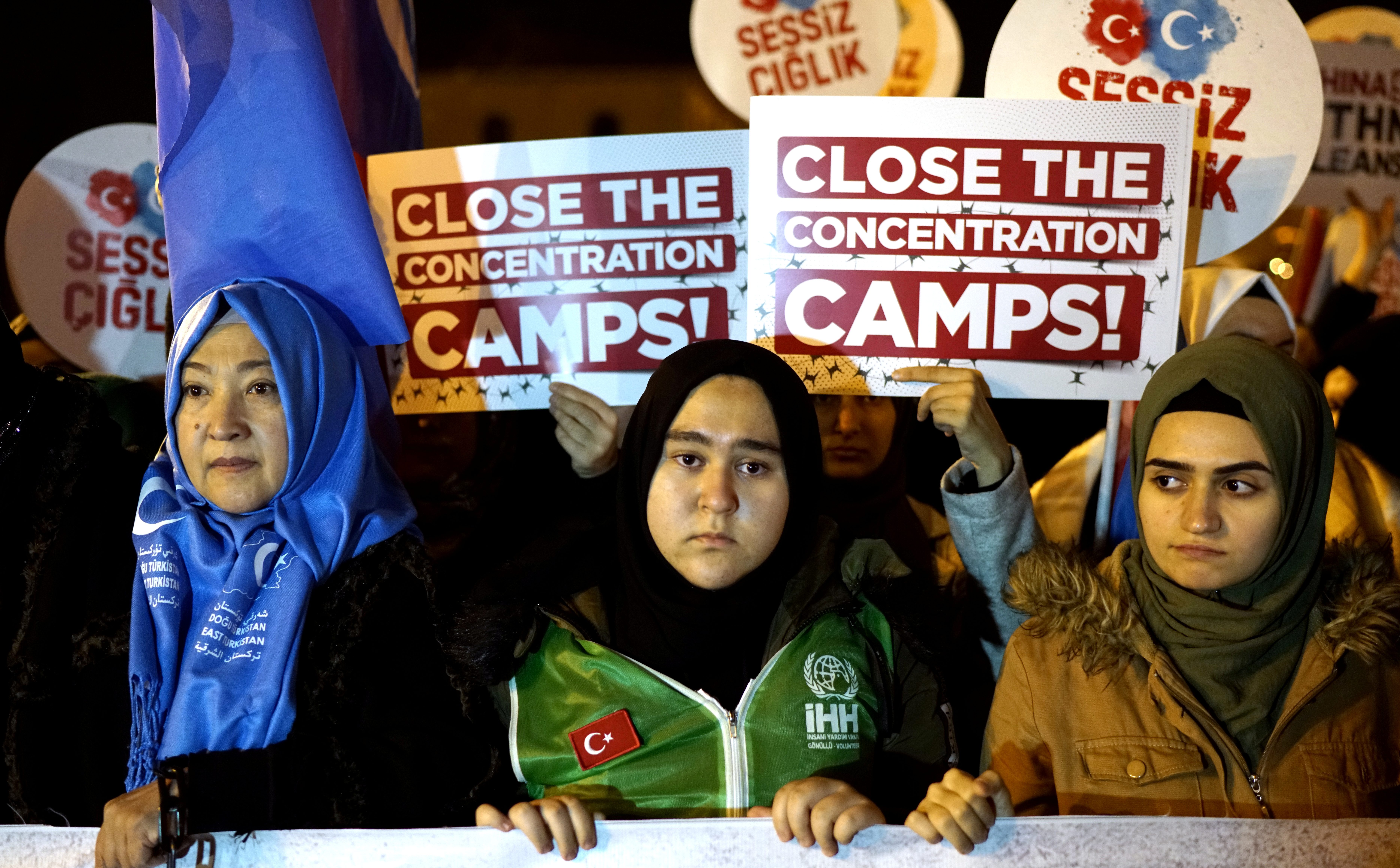 In her book A Problem from Hell, former US ambassador to the United Nations Samantha Power asked how much an atrocity had to “resemble the Holocaust for reasonable people to feel that there is only so much genocide that they will accept?”

Power was writing in the context of the world’s inaction over the massacres committed in Rwanda and Bosnia. The same question is now being asked of the years-long campaign of repression by the Chinese government against the Uyghur and other Turkic minorities in Xinjiang. The abuses include holding up to a million people in detention camps, the prohibition of certain Islamic practices, and forced sterilizations.

These abuses have been documented by rights groups, media organizations, and victims themselves since as early as 2017. But it is in recent weeks that a shift among experts to call the human rights abuses in Xinjiang crimes against humanity—or even genocide—has rapidly gathered speed. For members and advocates of the Uyghur community, that would be an important step in their campaign to raise awareness globally of their plight.

Jo Smith Finley, an expert on Uyghurs at Newcastle University in the UK, said that some scholars of Xinjiang had been hesitant to label the abuses a full-blown genocide, given the historic weight the term carries, choosing instead to use terms like “cultural genocide” or “demographic genocide.” But, she added, the confluence of recent testimonies and images out of Xinjiang have “produced alarming echoes of the atrocities of the Holocaust”—the horror that gave rise to the word “genocide.”

A growing number of people moved to use the term genocide last year as more testimonies of forced sterilizations endured by Uyghur and Kazakh women in camps in China came to light—forced suppression of births in a specific community, under the UN’s definition, is one of the five acts that constitutes genocide. In late June, the Associated Press published an investigation that detailed measures conducted by Chinese authorities to curtail the Uyghur birth rate, including the forced use of IUDs, sterilization, and abortions, prompting the Washington Post to state in an editorial headline, “What’s happening in Xinjiang is genocide.”

That was followed closely by reports of the seizure of 13 tons of weaves by US federal authorities, who say they believe the products were made from human hair taken from prisoners in internment camps. And soon after, the resurfacing of a video that showed hundreds of men with shaved heads blindfolded and bound at a train station in northern China gained widespread traction. Nathan Ruser, an analyst at the Australian Strategic Policy Institute, a think tank, geolocated the video to a train station in Korla, a city in Xinjiang, taken around April 2019.

The video, which first circulated last year, became the center of a fresh spat between the UK and China, after BBC host Andrew Marr interrogated Chinese ambassador Liu Xiaoming on a flagship politics program on July 19. Liu said that he did not know the provenance of the video, and denied that Uyghurs were being mistreated.

The interview went viral, prompting an unprecedentedly vocal response from the Jewish community, many of whom are weary of opportunistic and unwarranted comparisons with the Holocaust. Writing in conservative Israeli newspaper Israel Hayom, Ofir Dayan, a vocal advocate for Israel, said: “I have zero tolerance for analogies between current events and the Holocaust,” but that in the case of the Uyghurs “there is no alternative but to compare.”

Shortly after the BBC interview went to air, the Auschwitz Museum in Poland tweeted images showing Jews being deported to concentration camps, calling that “the last part of a long, slowly-developing process of humiliation, exclusion, persecution and hatred.” A spokesperson for the museum did not explicitly link the tweet to the video or to Xinjiang, but said that the museum hopes its tweets “might trigger some reflection about our contemporary responsibility for the world we live in.”

The president of the Board of Deputies of British Jews noted in a letter to ambassador Liu that “(p)eople being forcibly loaded on to trains; beards of religious men being trimmed; women being sterilised; and and the grim specter of concentration camps” bears similarities to “what happened in Nazi Germany 75 years ago.” Jonathan Sacks, the UK’s chief rabbi, tweeted on July 22 that he was “deeply troubled” by the plight of the Uyghurs. “As a Jew, knowing our history, the sight of people being shaven headed, lined up, boarded onto trains, and sent to concentration camps is particularly harrowing,” he wrote in a lengthy thread.

Gil Taieb, an advisor to the French government on anti-Semitism and a representative of French Jewry, asked on Twitter why all the “self-righteous” were silent over the treatment of Uyghurs.

Rian Thum, a historian of Islam at the University of Nottingham in the UK, noted that London-based Jewish News, a weekly publication, put the hair story on its front page in July. That “explicit mention of the Holocaust really opened a lot of space for people to talk about what’s happening as a genocide,” he said.

Days after Liu’s interview went to air, the Global Times, a hawkish Chinese tabloid, said that the video showing the blindfolded men was indeed a “prisoner transfer” and “normal juridical practice,” and denied that they were of a particular ethnic group. The Chinese government defends its incarceration of Uyghurs and other Muslims as a form of re-education that is necessary to purge them of extremist thoughts, and frequently denounces reports of other abuses such as forced sterilizations as groundless.

Rayhan Asat, a Uyghur lawyer based in Washington DC who has been campaigning for the release of her brother from an internment camp in China, said that given China’s immense size and power, few countries are willing to call out its practices in Xinjiang, compared to say Myanmar. Furthermore, countries are reluctant to label something a genocide because “once they do they have to act on it,” likening it to the dithering by the Clinton administration over the recognition of the atrocities in Rwanda as a genocide.

A legal process is underway now for the Xinjiang atrocities to be officially labeled as a genocide, after two Uyghur groups filed a complaint in July at the International Criminal Court against China. The court has power to try countries over genocide and crimes against humanity, but even if it agrees to open an investigation, it would not have jurisdiction over China as it is not a party to the court, though the plaintiffs argue that countries like Cambodia and Tajikistan, which have allegedly deported Uyghurs back to China, would come under the court’s jurisdiction.

The process is likely to be glacial, particularly as a new prosecutor is due to be appointed to the court, while a likely Chinese backlash could deter the ICC from agreeing to open an investigation. For now, Asat’s hopes lie in the formation of a kind of democratic coalition of countries to punish China’s actions in Xinjiang, amid signs that “we’re moving in the direction to a general consensus” among Western countries of a genocide in Xinjiang, she said. In the past few weeks, the US has imposed sanctions on top Chinese officials, as well as on the paramilitary organization that dominates Xinjiang’s economy. Calls for Western fashion companies to avoid the use of forced Uyghur labor and countries to boycott the 2022 Beijing Winter Olympics are also growing.

The parallels to past genocides, in particular the Holocaust, have no doubt helped stimulate global awareness and discussion over the Xinjiang issue. But Peter Irwin, a spokesman for the US-based group Uyghur Human Rights Project, said that while the debate over legal definitions is “critical to bringing perpetrators to justice after the fact,” from an advocate’s perspective “it’s absolutely crucial that we don’t get mired in a debate about labels.”

“The international community has an obligation to respond, irrespective of whatever label one might want to apply,” he said.