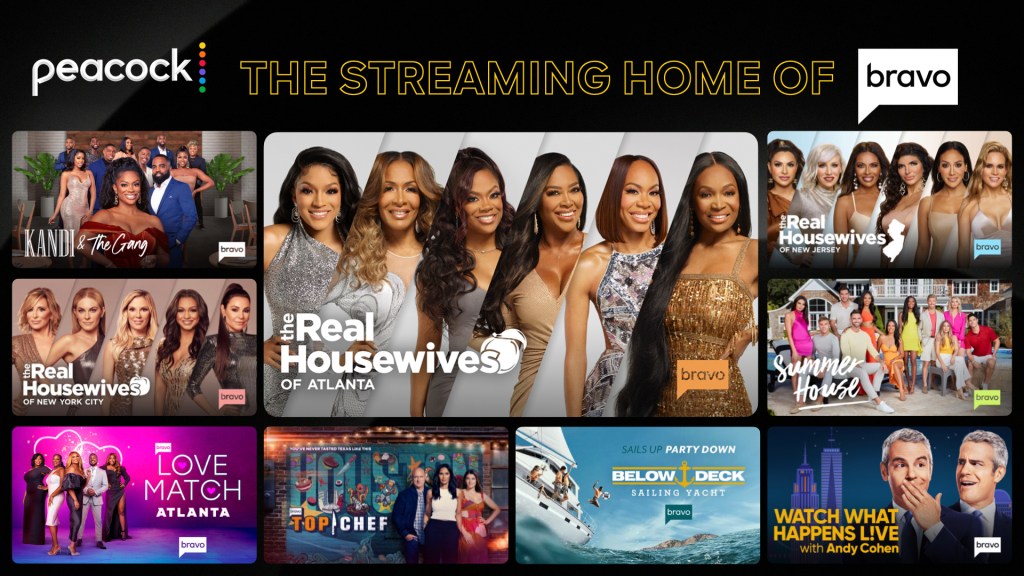 Peacock will be the first streaming service to offer access to Bravo shows the day after they air, in a new bit of corporate-sibling synergy at NBCUniversal.

For the first time on any streaming-only platform, new episodes of all Bravo shows will be available day-after-air to Peacock’s premium subscribers. The streamer also announced a multiyear movie output deal with Lionsgate, with titles to hit Peacock starting in 2024, and touted record-breaking viewing of “Bel-Air,” the drama series reboot of Will Smith’s “The Fresh Prince of Bel-Air.” The news came as part of Peacock’s 2022 NewFronts presentation Monday in New York for marketers.

“We are thrilled Peacock is becoming the streaming home of Bravo, which is such a beloved brand,” said Kelly Campbell, president of Peacock and Direct-to-Consumer at NBCUniversal. “Full fan experiences like this are part of the extraordinary value we offer Peacock customers.”

New episodes of all Bravo shows will be available to stream the day after airing. Previously, the only way to get next-day access to Bravo episodes was to subscribe to a pay-TV service.

Starting this fall, Peacock will become the exclusive U.S. streaming outlet for all Bravo shows — meaning they will be leaving Hulu. Earlier this year, NBCU ended its agreement with Disney for distribution on Hulu of next-day and current-season shows.

Peacock Premium subscribers can stream new episodes of Bravo series the next day and will have complete access to past seasons. In September, every Bravo series will be available to stream on Peacock next day. Until then, starting today, in-season shows with episodes streaming next day on Peacock include “Watch What Happens Live With Andy Cohen”; “Summer House”; “Below Deck Sailing Yacht”; “Top Chef”; “Kandi and the Gang”; and “The Real Housewives of New Jersey” and “The Real Housewives of Atlanta,” the latter which just had its season 14 premiere on Bravo last night.

Also, recently completed seasons will be added to the Peacock library of Bravo entire series available to stream, so fans can catch up on series like “The Real Housewives of Orange County,” “Million Dollar Listing New York” and “Vanderpump Rules.”

Looking ahead, fans will be able to find the latest episodes on Peacock the day after airing on Bravo for both new series like “Love Match Atlanta” and “The Real Housewives of Dubai” as well as returning series like “Southern Charm,” “The Real Housewives of Beverly Hills,” “Married to Medicine” and “Below Deck Mediterranean.” Peacock’s existing Bravo hub will have all past seasons of all Bravo shows in September.

The Peacock and Lionsgate theatrical output deal covers all theatrically released Lionsgate films beginning with the studio’s 2022 slate. The agreement brings blockbuster movies exclusively to Peacock and NBCUniversal networks for the titles’ Pay-2 window starting in 2024.

Under the pact, the first Lionsgate film to hit Peacock will be “The Unbearable Weight of Massive Talent,” starring Nicolas Cage. That will be followed by other films including: action thriller “John Wick: Chapter 4” starring Keanu Reeves; Hunger Games prequel “The Ballas of Songbirds and Snakes”; “Expendables 4,” with a cast including Sylvester Stallone, Jason Statham, Megan Fox and Curtis “50 Cent” Jackson; “Borderlands,” directed by Eli Roth and starring Cate Blanchett, Kevin Hart, Jamie Lee Curtis and Jack Black; “Are You There God? It’s Me, Margaret,” produced by James L. Brooks and adapted from the beloved Judy Blume classic novel; and “White Bird: A Wonder Story,” starring Helen Mirren and Gillian Anderson.

Lionsgate has multiple windows for its film slate and announced a Pay 2 output deal with Roku last week. Starz has the the Pay 1 pay window on Lionsgate releases, immediately followed by a brief exclusive Roku window, which will be followed by Peacock’s exclusive window and then a second Roku window at a later date.

“These agreements affirm the great demand for first-run studio movies across every kind of platform – AVOD, SVOD, basic cable and FAST,” Jim Packer, Lionsgate president of worldwide television distribution, said in announcing the deal. “This partnership with Peacock shows our ability to capitalize on opportunities in today’s complex media landscape with a multifaceted, layered approach that meets everyone’s needs.”

In addition, Peacock said “Bel-Air” set Peacock records for new subscribers, usage and upgrades. The series is the platform’s most-streamed original series so far, reaching 8 million accounts to date, according to NBCU. The series premiered on Feb. 13 (Super Bowl Sunday) and will return in 2023 with season 2. “We’re elated at the positive response to ‘Bel-Air’ and that this passionate audience quickly solidified the series into the cultural zeitgeist,” Susan Rovner, chairman, entertainment content, NBCUniversal Television and Streaming, said in a prepared statement.

“As our fastest-growing and most-streamed original series ever… ‘Bel-Air’ is having a profound impact on Peacock,” Campbell said.

In addition, Peacock unveiled two new ad formats for the AVOD side of the streaming service at the Newfront presentation: The Peacock Frame Ad, which presents contextually relevant brand messaging in a frame around a piece of content; and the Peacock In-Scene Ad, which would integrate a brand’s product and/or messaging during post-production in key moments within top shows on the service for more personalized messaging.