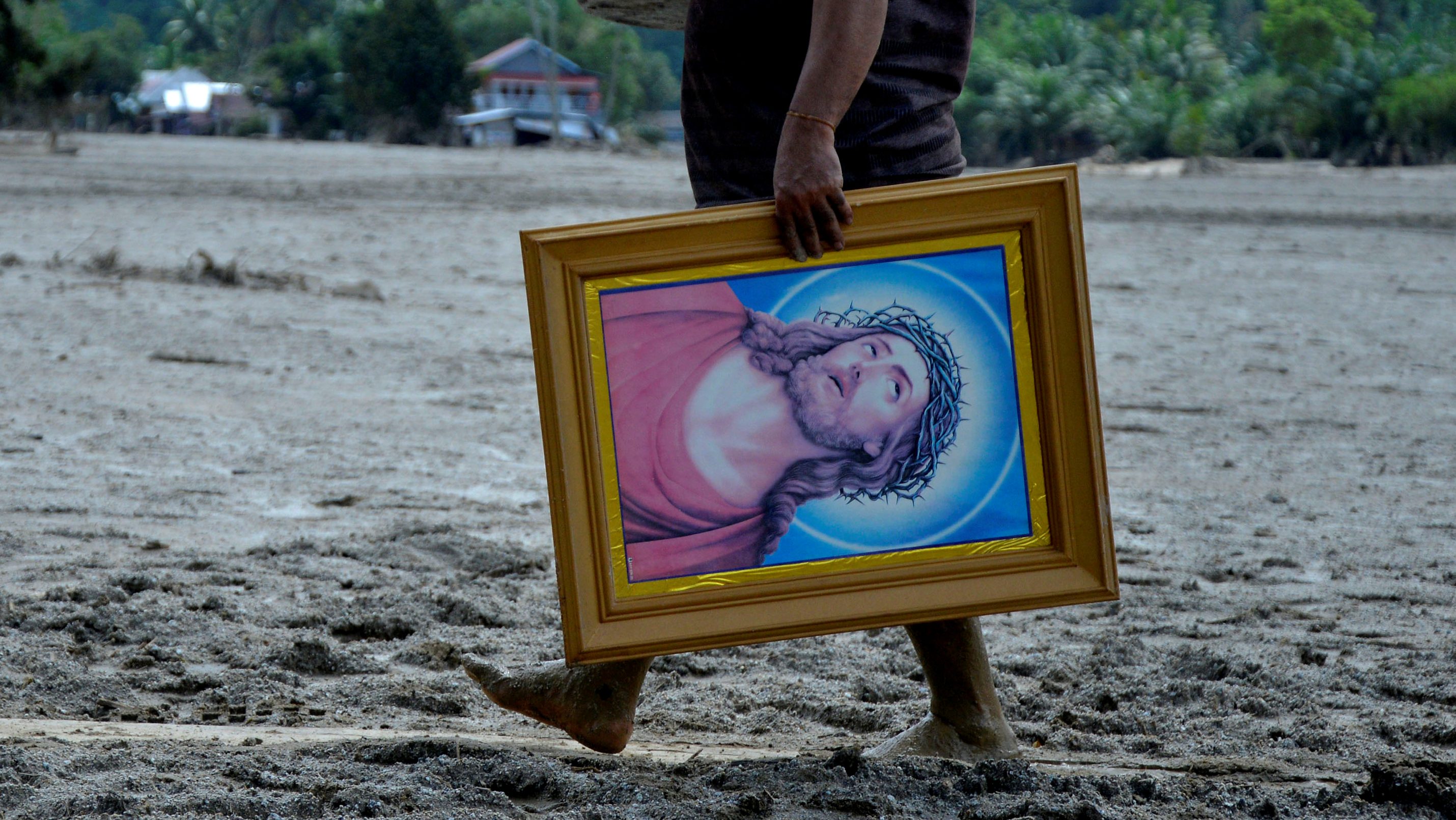 ﻿﻿﻿﻿As a child in New York City, Steven Roberts attended a predominantly Black church where—as is common in Black churches across the US—God and Jesus were depicted as white men.

Being watched and policed by a white Jesus was confusing, says Roberts, now an assistant professor of psychology at Stanford University and co-director of its Social Concepts Lab. Perhaps it was partly his pastor’s framing of God as a judge, he tells Quartz, but the contrast between the Black congregants and the all-seeing white man who featured prominently in the room, high and mighty, made him feel uncomfortable.

Many Black Americans have made similar observations. In a BBC interview in 1971, Muhammad Ali famously cataloged all the questionable “white” cultural symbols—including angels, the men in Leonardo da Vinci’s The Last Supper, and a blonde-haired, blue-eyed Jesus—that he would ask his mother about when he was a boy. The writer James Baldwin spoke of his community being victimized by “an alabaster Christ.” And more recently, Black Lives Matter activists have called to remove images of a white, Eurocentric Jesus—which are counterfactual—as intentional symbols of white supremacy in the US.

Scholars have documented how those depictions have supported a white supremacist agenda. And they’re beginning to investigate how the whiteness of divine images has impacted the mental landscape for Black Americans. Recent research led by Simon Howard, a psychology professor at Marquette University, suggested that white religious icons are linked to subtle anti-Black and more marked pro-white sentiment among Black Americans who have internalized racist images and ideas.

Roberts is continuing that line of investigation. He led a team of psychologists for a study published this year in the Journal of Personality and Social Psychology that investigated a related question: How does the race and gender assigned to a metaphysical God relate to real life ideas about who belongs in positions of leadership? And how might God’s whiteness contribute to overwhelmingly white and male corporate leadership?

They discovered that among US Christians and non-Christians alike, and among adults and children, the more people see God as white, the more likely they are to favor a white candidate for a corporate managerial role.

Roberts and his team are not suggesting that, on its own, the widely viewed image of a white God explains the grossly unequal racial representation in US corporate leadership. The reasons for that are myriad. But their results indicate that the widespread imagining of God as white has helped to build and protect the rigid racial hierarchy that exists in organizations.

“Racism is not about bad apples or people who hate other people,” says Roberts. “Racism is embedded in our images and in our school systems, it’s the air that we breathe. We’re all affected and infected by it.”

Western culture has wallpapered people’s psyches with images of a bearded supreme figure who is white and masculine. The effects of that conditioning on how we choose managers and CEOs need to be made visible.

“Draw a picture of God”

Roberts’ paper, co-authored by other Stanford researchers and psychologists from Vanderbilt and California Polytechnic State University, involved several studies that tried to get to heart of the dynamics between racialized leaders and religious figures.

“The extent to which God is conceptualized as White, which may be a deeply rooted intuition, predicted increased ratings of White candidates, even among Black Christians,” the study authors write.

For another study, the psychologists recruited Christian children of various races and asked them to draw pictures of God. Separately, they presented the kids with photos showing the faces of Black men and women, and followed up: “There are lots and lots of people at the place where I work,” the psychologists said. “But only three of them are bosses. Which three do you think are bosses?”

Both Black and white children depicted God as male and white, suggesting that this vision of God forms early in a person’s development, says Roberts, and is only later adjusted to match their in-group. And similarly to the adults who saw God as white in the first study, the children were not partial to Black faces as contenders for “boss.”

In brighter news, the children were just as likely to select women as men as bosses. For children, the psychologists surmised, God’s race was more relevant than God’s gender. Sadly, however, the first few studies all supported the hypothesis that the more adults and children see God as white, the more inclined they are to view white people as the best fit for a managerial role.

Who should rule the planet Zombot?

Roberts and his team also wanted to explore the association between God’s image and a leader’s physical attributes in isolation, outside of a strictly Christian context. What would happen if God had an entirely different identity? Asking people to picture God as a different race or gender was ruled out, so they dreamed up a fictional planet instead.

The planet used in their study, called Zombot, is inhabited by two peoples, Hibbles and Glerks. These peoples shared one supreme being, Liakbor, who “created everything on Zombot, including the water and lands, the grass and trees, and all of the creatures that live on it.”

The psychological associations participants made between “God” and the beings that looked like God also worked in reverse: When shown images of one group—either Hibbles or Glerks—living in a fine castle on Zombot, participants assumed that Liakbor was of the same Zombotian extraction as that privileged tribe.

Roberts and his team then recruited 51 preschoolers of various backgrounds who had never heard of God at all and introduced them to Zombot. Like the adults, the four and five-year-olds in that study used “information about a fictional God to make inferences about who should be in leadership,” Roberts says. “It was one of the more important findings because it shows that this is not a Christian thing. It’s a psychological thing about, ‘What identity do you attribute to God?’”

What is going on?

Simon Howard at Marquette University—who was not involved in Roberts’ study, and also remembers being puzzled by a white Jesus in his childhood—calls the research “phenomenal.”

“It’s pretty compelling evidence when you take all his studies together and the interpretation is that the way in which people imagine or conceptualize deities does influence who they think should be in power,” he told Quartz.

Still, Roberts and his co-authors acknowledge the study’s limitations: It focuses on US culture and Christianity, and future research may want to pose the same questions in multiple cultures and among other faith groups. They ask: “Does the conception of God as a White man emerge among racial minorities in predominately European contexts, such as Germany and Sweden? What about in predominantly Black and Brown contexts with a heavy Christian influence, such as Ghana and Mexico?”

Howard, too, believes the color of God’s skin in famous paintings like Warner Sallman’s Head of Christ, which has been reproduced a billion times all over the world, is “part of the story,” but not the full explanation for the racial hierarchy in American business. He sees the relationship as mostly indirect.

“When someone in power shares racial membership with God or a boss-like figure in our lives, people might be reluctant to question those individuals,” Howard proposes. “If this person is likening themselves as a God…and we’re not necessarily supposed to challenge authority or challenge God, then we might be less likely to challenge the white men who are in positions of power. And if they’re going unchallenged, they may maintain power.”

In hiring practices, he says, a societal bias towards white candidates might be explained by associating Godliness with whiteness, meaning “whiteness is either superior or more competent than blackness or not whiteness.”

The very existence of a white-dominated hierarchy also reinforces the notion that God is white, as Roberts’ Zombot study would suggest. We’re stuck in a kind of self-perpetuating loop of racial oppression. Its existence is real and meaningful, the authors write, no matter why God’s race was deemed white in the public imagination in the first place.

How do we change?

In a delightful moment within the mostly discouraging project, Roberts was leading a group of researchers working with children when he learned just how open young minds could be. One of the psychologists asked a child, “What does a boss look like?” The kid pointed at Roberts.

“It was so cute to me because it highlighted that they didn’t really know what we were talking about,” Roberts says. “And they have such a flexible concept. I’m not a white guy, so that was fun.”

But by adulthood, he says, “it’s just a whole different situation.”

Indeed, in another one of his studies, an adult participant who was shown a painting featuring a Black, female deity by the Afro-Cuban American artist Harmonia Rosales, left this written response for the researchers: “The artist is challenging the notion that #1 God is a man, #2 God is White. If I were at an art gallery and saw this painting, I would walk by shaking my head as it is just one more politically correct recreation of who God is. Disgusting! Oh, and I say this as an African American woman.”

That was shocking, says Roberts. It was also sobering evidence about how adults might reject or even be repulsed by information that challenges their long-established vision of God’s human form. To address racial inequities in leadership by asking people to rethink God’s skin color or gender might not be fruitful.

Addressing this issue early in a person’s life, when children are still forming their ideas about the world, might be the best way to disrupt the pattern of mental model making. “My belief is that kids don’t come into the world with this belief that there’s a white man floating in the sky. That’s something you learn,” says Roberts, who also teaches a popular undergraduate class called How to Make a Racist. “Nobody enters into the world wanting to believe that some people are more deserving or better than others; that’s something that people learn and pick up on the way, and that has consequences,” he says.

The study offers “clear evidence to suggest that if kids don’t have that belief in mind, they’re not going to make that inference that whoever God is, whoever shares that identity on Earth is actually the best,” he continues. “But the problem is: how do we, in practice, prevent them from getting that concept?”

“Maybe with this research and other work, teachers, educators, everyone can start to think: How can we prevent those things being learned? How do we prevent ourselves from even teaching those things? How do we change?”

Simon also argues for rethinking the religious imagery children are exposed to in the same way that Americans are now questioning Confederate symbols. “A Confederate statue conveys a certain meaning, and if people think that they should come down based on what they represent, then why aren’t we having that same conversation about statues and images of Jesus being portrayed as white?” he asks. “We’re not ready as a society to have that conversation, but it’s one that should be had, because—and I say this without any reservation—I think images of Christ portrayed as white are white supremacy in plain sight.”

Black ministers who have been talking for decades about how damaging it is to portray God as white have written to Roberts with notes of gratitude. “They’ve been trying to preach to their congregations and to people about how these images can be damaging,” he says, “but no one ever believed them.” Now they have the data as proof.