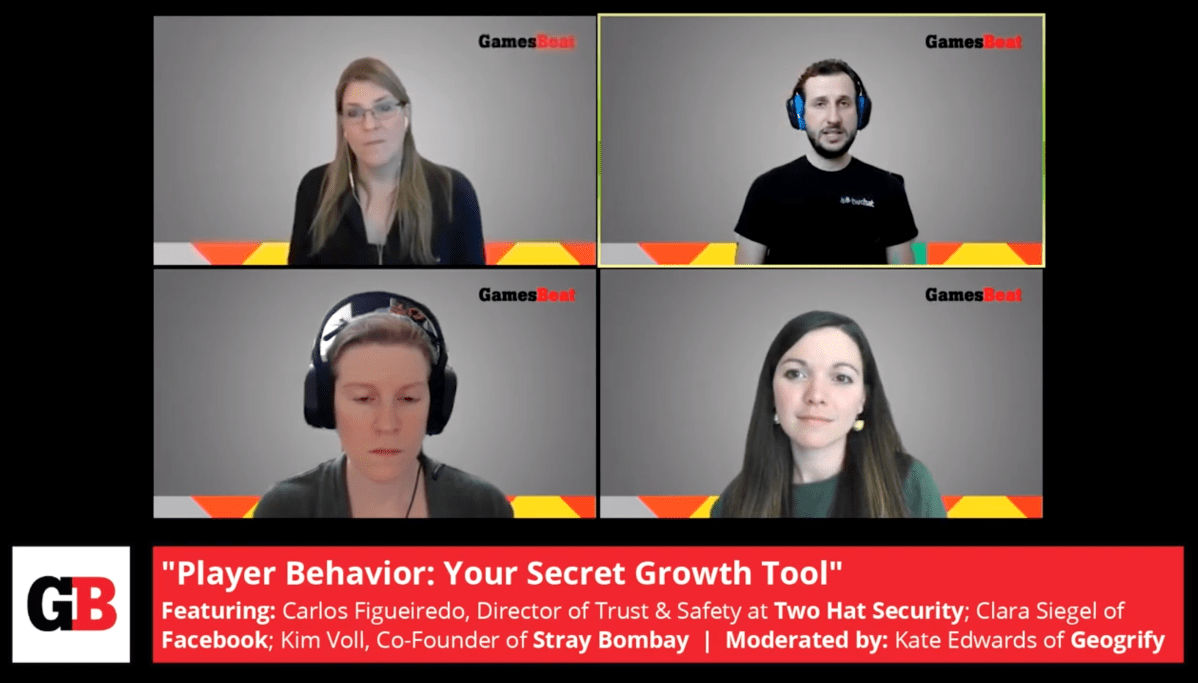 “Player behavior is such an important part of people’s experience when interacting with any game,” says Clara Siegel, Product Manager, Facebook Gaming. “As the people who are building these, we should think about [this] as just as important as the other elements of what we’re building into a game or gaming platform.”

Siegel and other game community experts came together during GamesBeat 2020 to discuss how to create gaming experiences that are positive — and why your most important growth strategy is to model positive behavior and positive interactions within a community.

Social is sticky for games, agrees Carlos Figueiredo, Director of Trust & Safety at Two Hat Security. He points to the study of a major mobile game in which group chat is central to the player experience. The study found that the LTV of players who use private group chats is 20 times that of those who don’t chat, and engagement and session length is four times higher.

“Obviously, any gaming community is not just about the game,” says Kate Edwards, CEO of Geogrify. “That might be the thing that draws people in, but then the community itself, for a lot of people, becomes the reason they come back.”

“Players should expect and deserve to have a safe and inclusive place to play. We know, just from being humans ourselves – and the psychology research bears this out as well — that feeling included means that you want to stay,” says Dr. Kimberly Voll of Stray Bombay. “This is a smart thing to do, and it will pay a lot of dividends.”

“When we talk about expanding the player base as a result of this, we’re talking in the ballpark of 2.5 billion people,” Siegal points out. She says each game developer and company needs to decide how welcoming they want to be toward those people. And that means determining, of those 2.5 billion, who is going to be interested in any specific type of game.

“Just from a purely numbers and theoretical perspective, it makes sense for folks to realize the growth potential that comes from this,” she says. “At Facebook, we have 700 million people who play games or engage in gaming groups each month. 40% of them are women. The market is definitely there. It’s just up to each company to decide how to welcome them.”

The job of community developers is to think about how to minimize the negative player behavior that might show up in communities and to maximize the positive interactions. While the majority of players engage in a positive way, it’s quite possible disruptive behavior can be traced back to the fundamental choices that have been made in game design itself, as well as gaming services or products, Voll says.

“There’s a lot of tendency to take behavior we see in games as a given rather than stepping back and looking at it from a design perspective,” she says.

There are proactive strategies to help you combat those negative behaviors. At Two Hat, the team works with developers like Roblox, Rovio, Supercell, and Kabam, to safeguard their communities and maximize positive player interactions by deploying proactive and flexible filter settings.

“I find it table stakes to have a strong, contextual filter that’s able to prevent the worst, very much in a proactive way. If somebody is using dangerous speech, hateful speech, why expose players to that if you are able to find and block it?”.

At Facebook Gaming, they clearly laid out the rules and norms of the community, and ensured players that these were being strictly enforced.

It turns out that with these two elements in place, two things happened. One, people had much better expectations established for what kind of content is and is not allowed in those communities. This is important as a warning for people who might be tempted to break the norms, but it’s equally important as a signal to those who want to know they can feel safe. And two, it set expectations for whether the community was, indeed, the right community for a player.

“That’s going to be true at a platform level,” Siegal says. “Any gaming company or gaming product company is going to want to have a set of standards that are enforced centrally, dealing with some of the most toxic types of behavior.”

Figueiredo agrees: It starts with a good definition of the types of behaviors that are well aligned with the platform, or the purpose of the game, and what you want to see players doing and engaging with — and then determining what types of behaviors are going to take away from the intended experience, and eliminating them.

“I’ve talked to a lot of game companies consulting, and I’m surprised a lot of times when folks haven’t yet put a thought into that,” he says. “Surprised, but I also understand. It’s difficult to have that solid, that shared terminology and understanding.”

Facebook partnered with Fair Play Alliance, an organization that supports gaming companies to foster healthy player interactions, to identify the most common types of disruptive behaviors people experience in gaming communities online. Based on that collaboration, they created a toolkit for handling those situations.

This includes rules around criticizing other players, a common experience for newer players who sometimes get mocked and feel excluded in communities. Another rule focuses on being accepting in order to help people of all backgrounds and game choices feel welcome in a community.

“We offer those as optional to our streamers, who are really community leaders on the platform, to be able to pick and choose and communicate, hey, this is what this community is all about,” Siegel explains.

This toolkit allows the moderator, when they remove a comment, to indicate which rule was broken.

“It’s like saying, Hey, maybe you’re just having a bad day, or maybe you forgot what this rule meant, so we’ll offer this reminder and hopefully it can help, she says. “This is really about communities being able to craft the kinds of spaces they want and be clear on what those norms are so that people can feel authentic being themselves,” she says.