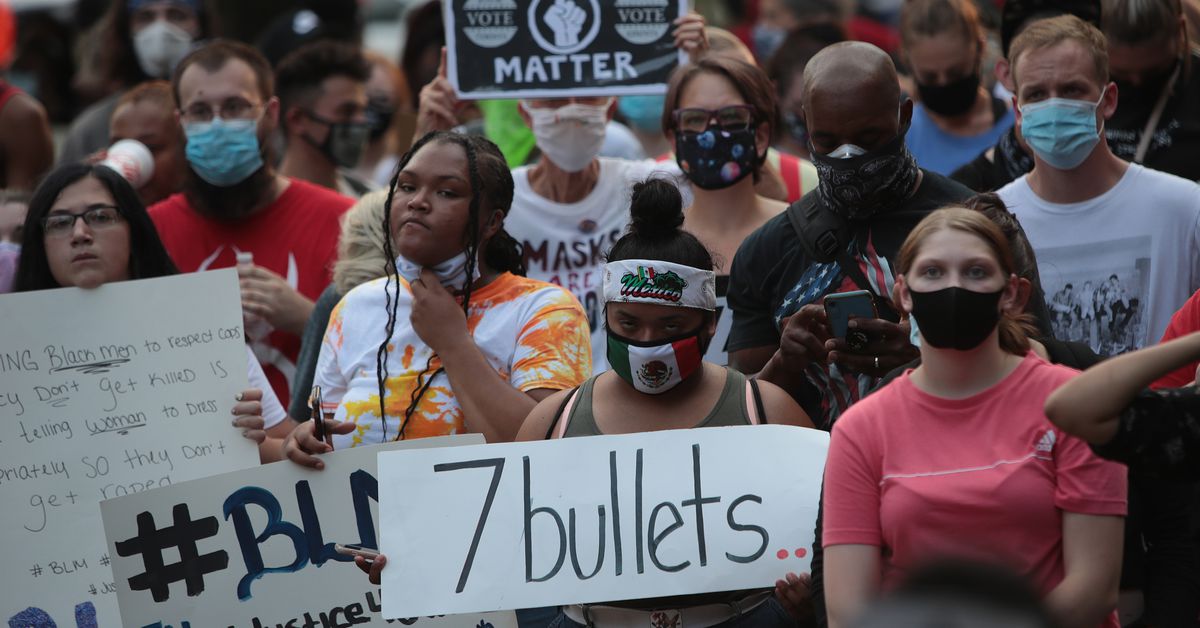 Jacob Blake, a 29-year-old Black resident of Kenosha, Wisconsin, was shot in the back at point-blank range seven times by white Kenosha Police Department officer Rusten Sheskey on August 23, according to the Wisconsin Department of Justice.

Sheskey was a member of a team of officers called to Kenosha’s Wilson Heights neighborhood to respond to a domestic disturbance. Two of those officers unsuccessfully attempted to use Tasers to subdue Blake in the moments before the shooting, as reported in the Milwaukee Journal Sentinel.

Two videos of the officers’ interaction with Blake have emerged. The first, which went viral, depicts Blake’s shooting; the second shows some of what happened in the moments immediately prior as two officers attempted to force Blake to the ground.

After the shooting, Blake was transported to the hospital. The officers arrested him; Kenosha’s police chief has said he had an outstanding warrant. A knife was recovered at the scene, from the floorboard of Blake’s vehicle. Also inside the vehicle at the moment he was shot were his three young sons, according to his family’s lawyer, civil rights attorney Benjamin Crump.

The seven bullets left Blake with serious wounds, including spinal damage that may leave him permanently unable to walk, his father — also named Jacob Blake — has said. Doctors were forced to remove most of Blake’s colon and small intestines; his kidneys, liver, and arm were also damaged.

The shooting immediately sparked protests in Kenosha and intensified demonstrations against police brutality and for civil rights that have been ongoing across the US since the killings of George Floyd and Breonna Taylor. The Kenosha protests briefly became violent when a 17-year-old Illinois resident armed with an assault rifle shot three protesters, killing two.

Democrats and Republicans have both used this shooting — and another fatal shooting at a Portland, Oregon, protest — as evidence of the other party’s shortcomings, with President Donald Trump saying during his Republican National Convention address that uprisings across the nation — and the violence adjacent to them — show that “No one will be safe in Biden’s America.” The president has also said “Radical Left Democrat Mayors, like the dummy running Portland, or the guy right now in his basement unwilling to lead or even speak out against crime” (referring to Democratic presidential nominee Joe Biden) are keeping Americans from enjoying “Law & Order.”

Biden, however, has pushed back against these claims.

“These are not images of some imagined Joe Biden America of the future — these are images of Donald Trump’s America today,” Biden said in a Philadelphia speech. “He keeps telling you, if he was president, you’d feel safe. Well, he is president — whether he knows it or not.”

Amid this rhetoric, an investigation into Blake’s shooting has been launched. The Federal Bureau of Investigation is conducting an investigation that is meant to compliment the investigation being done by the Wisconsin Department of Justice. Three officers involved — including Sheskey — have been placed on administrative leave.

Please follow this storystream for more on Blake’s shooting, protests, and the response to both.