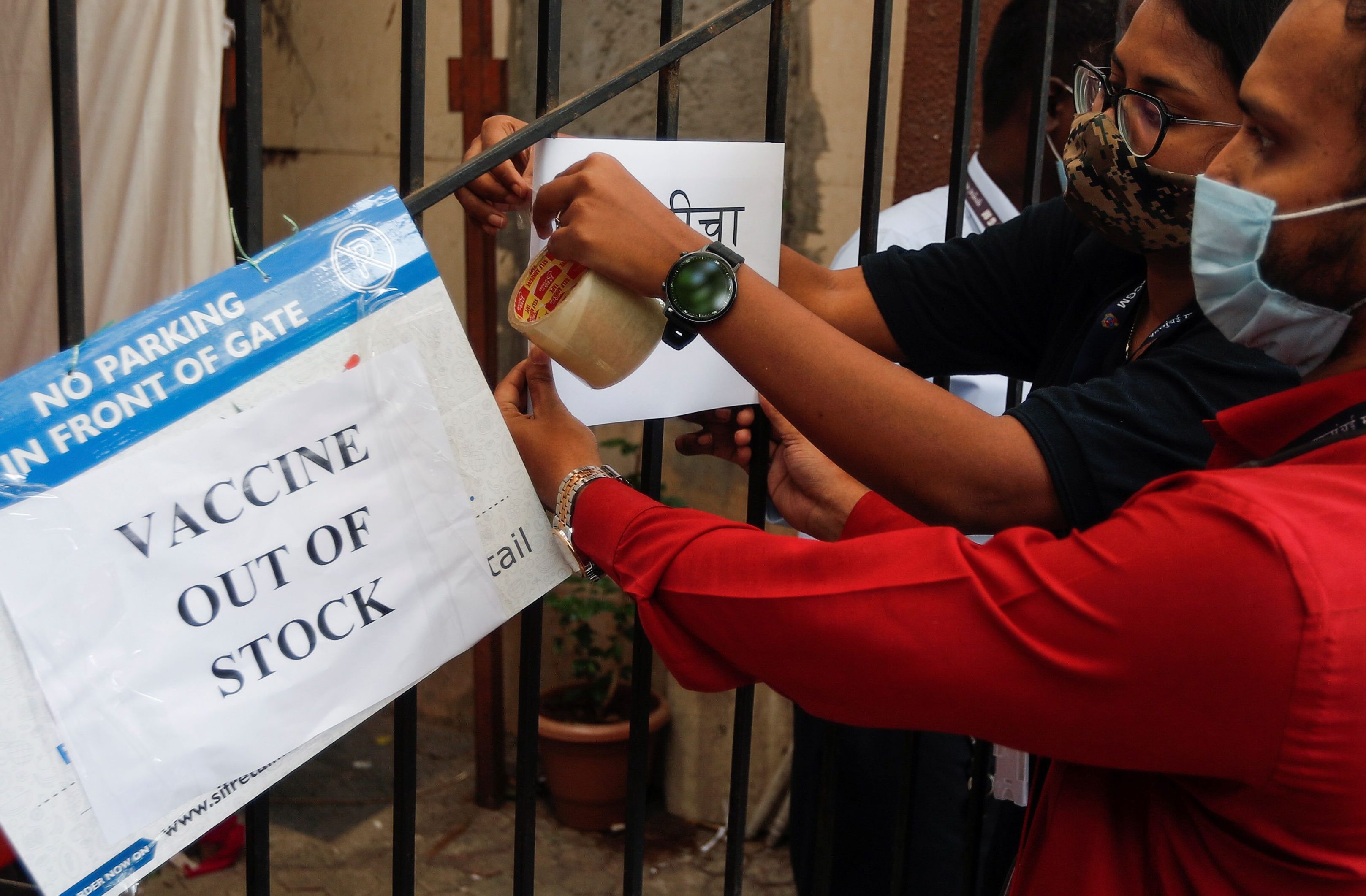 India is currently in its third phase of Covid-19 vaccination where those above 45 years are eligible to get the shots. Public and private hospitals have administered over 80 million doses with most of them accounting for the first dose.

But this phase has coincided with the second wave of Covid-19 infections.

Three months after it rolled out vaccines, the country hit a grim milestone on April 5 when it recorded over a lakh fresh cases with cases surging in states like Maharashtra, Punjab, Chhattisgarh, and Karnataka among others.

This begs the question: Why has the Centre not yet opened up vaccines for all?

Responding to this question at a press briefing on April 6, the Union health secretary Rajesh Bhushan said the aim is not to administer the vaccine to those who want it but to those who need it. “Many people ask why shouldn’t we open vaccination for all. There are two aims of such vaccination drive—to prevent deaths and protect the healthcare system,” he said.

But some experts say they see no reason for the government’s hesitancy on this. Others, however, opposed a full rollout of doses and said it was important for the government to target specific groups or states with a high number of cases.

Does India have vaccines for all?

One of the world’s largest vaccine makers, India has boasted of its capacity by exporting more than 60 million doses to various countries as part of its vaccine diplomacy.

The centre on March 23 maintained that there is no shortage of vaccines but two days later Reuters reported that the government halted large exports of the AstraZeneca vaccine, manufactured by the Serum Institute of India, to meet national demands as cases surged.

Within the country, the vaccination drive started on Jan.16 but was limited only to healthcare and frontline workers. On March 1, the drive was modified to include senior citizens over the age of 60 years and those above 45 with comorbidities. This was widened to all above the age of 45 on April 1.

The priority at present should be to vaccinate a wider group in the country, some experts said.

“Scientifically, anybody above 18 years should be eligible to receive the vaccine,” said Giridhar Babu, professor and head of Life Course Epidemiology at the Public Health Foundation of India. If there was no supply-demand crisis, “why they are not receiving it, only the government can answer”, he said.

K Sujatha Rao, former Union health secretary, also agreed that there could be no other plausible explanation. “Has international diplomacy come at the cost of Indian citizens?” asked Rao. “As a responsible country, we should contribute to Covax, but exports for commercial sale is not a good idea.”

Covax is a World Health Organization-led initiative to distribute vaccines to low and middle-income countries. By mid-March, India had exported more than double of the doses it had administered—only a part of the shipments were meant for Covax.

Both Babu and Rao said delivering vaccine doses to Indians was unlikely to be a problem.

“There is the NGO sector, the private sector, you just have to decentralise it,” said Rao. “It’s about giving simple instructions on how to handle the vial. Every brick counts in an emergency.”

Babu agreed. “We are doing a universal vaccine program using largely people from the government sector,” he said. “They have the capacity to cover an even larger population.”

What will happen if vaccines are in short supply?

To meet the possibility of a full rollout, India would need a large supply of vaccines. But in the past week, several states have recorded vaccine shortages.

With 44,296 active cases, Chhattisgarh ran out of doses on April 5 and could carry out only around 30,000 vaccinations as opposed to nearly four lakh vaccinations per day, The Print reported. It later received over 300,000 doses, the report stated.

Citing this, some have warned against spreading ourselves too thin by opening up vaccination to all and said that it needed to be focused on states with higher infections.

“Certainly in states like Maharashtra, Punjab that are showing a definitive surge, vaccinations should be open to all, but there is no reason to do that to states not showing a surge,” said Dr Shahid Jameel, a virologist and the director of the Trivedi School of Biosciences at Ashoka University. “We cannot treat Maharashtra and Nagaland, which is seeing fewer cases, as the same,” he said.

If age limits for immunisation were lifted across the country, it could lead to logistical challenges in the supply of vaccines, others maintained.

“The level at which our production and supplies are of our vaccine, it is going to take broadly three months to vaccinate 30% of the population, if we maintain 30 to 40 lakh doses per day on an average,” said Yogesh Jain, a physician who runs a community hospital in rural Chhattisgarh. “And that is not happening.”

What is the best way to target vaccinations?

Among the states with a rising number of cases, Maharashtra has administered the highest number of vaccinations so far followed by Gujarat, Rajasthan, Uttar Pradesh and West Bengal, according to the CoWin dashboard.

Interestingly, Gujarat with over 16,000 active cases has inoculated over 10% of the state’s population and doubled vaccinations within the first week of April by setting up vaccination camps at educational premises, residential societies, office complexes, bank branches and other such outlets, reported The Hindu BusinessLine.

Experts said there was a need for a planned outreach. Jain suggested that the government had to take the vaccine to communities rather than having beneficiaries register online and go to the district hospital. “They need to give it [the vaccine] like a real campaign,” Jain said. “Only giving it to limited groups does not make it a good strategy.”

Others suggested targetting vaccinations on the basis of occupation – to ensure those at high risk of spreading the virus to others are covered.

“Typically if a vegetable vendor is interacting with people, and if he gets infected, then he can spread it,” explained Dr T Sundararaman, former executive director of the National Health Systems Resource Centre, an advisory body to the health ministry. “So there are some people who will be the interconnection between different clusters,” he said, adding that the aim should be to vaccinate those who interact beyond a single cluster.

Another example Sundararaman cited was that of prison inmates. “They are in an enclosed space with less ventilation and are likely to get infected,” he said.

But all this cannot be done using CoWin, the government’s online vaccine registration portal, he said. It would have to be through a public health outreach programme, but not one on the lines of immunisation programmes that targeted mothers and their infants, he said.

“You may want to contact your labour contractor and construction workers, or office managers in IT firms, vendors or traders associations,” he said. “There have to be ways to reach out to [high-risk] people on a priority irrespective of age.”

Can vaccinations shorten the second wave?

Many experts agreed that the slow pace of vaccinations, the emergence of the second wave and restrictions in several states meant that India was facing a situation similar to the start of the pandemic last year. This, they said, reflected poorly on the government’s management of the pandemic.

“From the beginning, we were saying we have to develop arrangements to live with this and integrate it with regular health systems and that did not happen,” said Sulakshana Nandi of the Jan Swasthya Abhiyan.

And even if the government started to vaccinate everyone now, the effectiveness would only be visible at the end of the second wave, said one of India’s leading virologists T Jacob John.

“In six weeks time the second wave will be completely over,” he said. “We are always two to three months behind the virus,” said Jacob, adding that he was highly critical of the way the government has approached the pandemic.

He questioned the Centre’s objectives when it rolled out the vaccines for health workers in January whereas other countries had already administered two doses to its health workers by December 2020, he said. “The vaccination was given as a reward,” he said. “What a mistaken notion of the vaccine.”

In light of shortages being cited by states, the government should have made advanced purchase orders in January as soon as approvals were given, he said. “If we cannot supply enough vaccines for the state of Maharashtra, then we got nothing right on the vaccine front,” he said.

This piece was originally published on Scroll.in. We welcome your comments at ideas.india@qz.com.