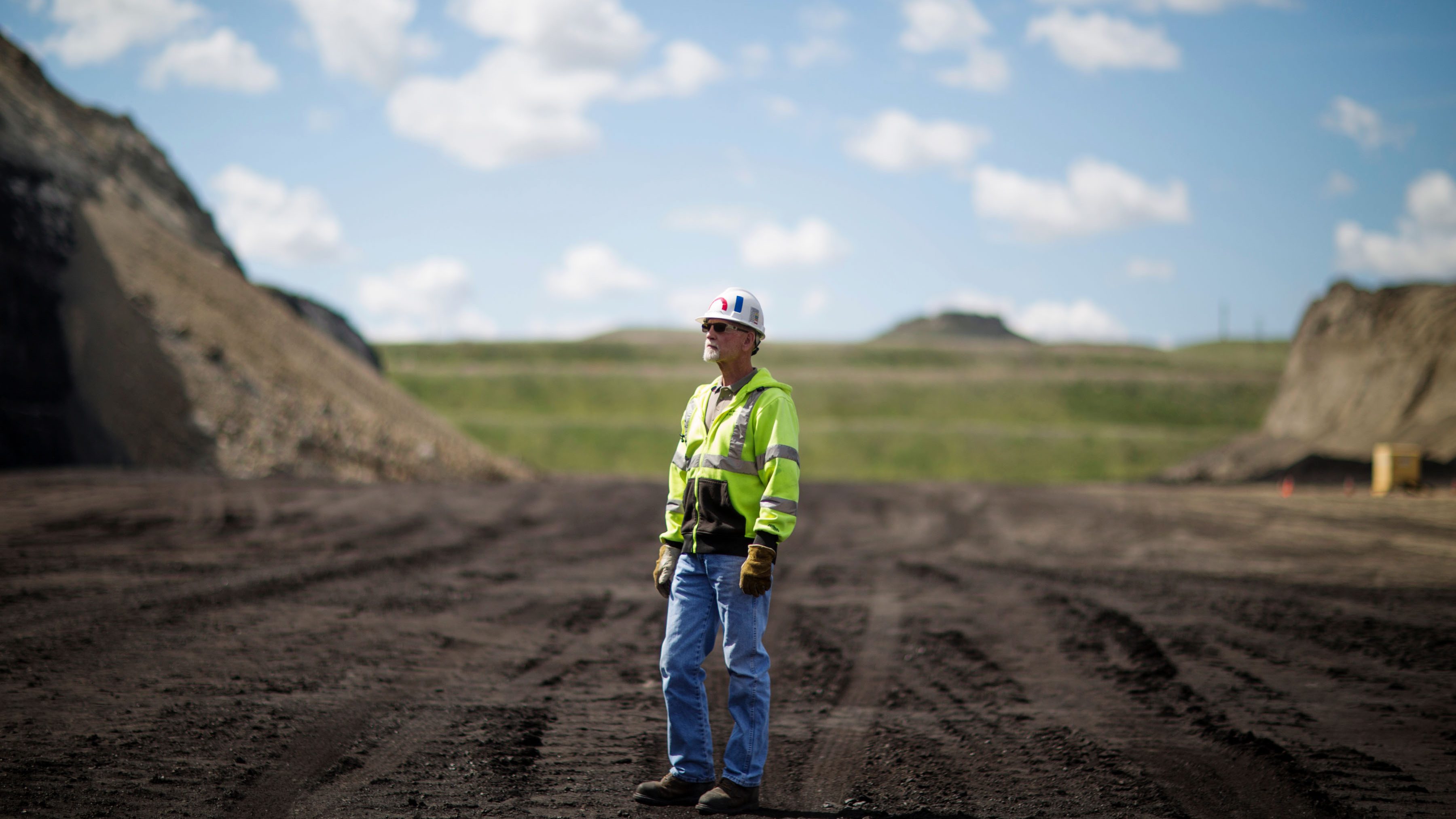 It’s an old joke in Wyoming that the economy is already well diversified: It produces oil, gas, and coal.

Flying over the state affords a view of fracking wells pulling oil out of the ground and coal trains carrying loads of black anthracite to power plants around the country. Nearly a fifth of the state’s workers collect a paycheck, directly or indirectly, from the fossil fuel industry. Wyoming’s treasury derives more than 50% of its revenue from the fossil fuel industry.

But these days, the joke leaves a bitter aftertaste. Amid the worst collapse in fossil fuel demand in a century, production has fallen off a cliff. Oil, gas, and coal production in the state is expected to drop by about 45% this year. Intensifying the pain, the US government recently slashed royalties on oil and gas to close to zero to bail out the industry, depriving the state of more than $240 million through 2021 (pdf; p 12).

Wyoming is facing a dilemma familiar to struggling countries everywhere that are rich in raw materials but little else: the “resource curse.”

Coined in 1993 by British economist Richard Auty, the phenomenon describes countries blessed with natural riches that end up with anemic economies reliant on a volatile global commodity. It’s no friend of free societies: Only one of the twenty-three countries that earn 60% of export revenue from oil and gas are democracies. This unhappy club includes Angola, Venezuela, and wealthy Middle Eastern countries such as Saudi Arabia.

The US is different, but Wyoming and its western neighbors face the same forces sapping life from those economies. (New Mexico, for one, is facing a $2 billion budget shortfall.) During good times, the money rolls in as the rest of the economy atrophies. In bad times, governments are left with few options to attract new industries or raise taxes. In the worst cases, such as the Democratic Republic of the Congo, countries sink into abject poverty, corruption, and war despite—or rather, because of—the buried wealth beneath them.

In Wyoming, the second-largest US energy producer after Texas, the curse has inflated a ballooning deficit just as residents need help coping with the pandemic’s fallout. With a vanishing tax base, Wyoming governor Mark Gordon said on July 8 that an initial round of 20% budget cuts would be just the beginning. “That next round will be even harder,” he said at a press conference. “But these are the times we live in and these are the choices I need to make.”

Cuts won’t cut it. Closing the state’s $1.5 billion budget gap over the next two years without new revenue would mean laying off every state employee or eliminating all higher education funding. Wyoming, along with other western states reliant on oil and gas for tax revenue, are still laboring under an 18th-century belief that mining raw materials leads to prosperity. But to escape the resource curse, they’ll have to invest in a diversified private sector that has yet to be built.

In 1992, rural sociologist William Freudenburg of the University of Wisconsin-Madison identified regions with what he called “addictive economies.” Governments reliant on coal, oil, or ore royalties often became dependent on short-term revenue while neglecting long-term development.

That strategy held some promise in the 18th century. England, notably, used it to fuel and deepen its manufacturing sector during the Industrial Revolution.

But it has flopped in the modern world. One 1995 study of developing nations found economic growth was negatively correlated with raw-material exports. Resource-poor nations often outperformed their richly-endowed peers.

One reason is that global commodity prices have tended to fall in the 20th century, even as extraction costs have risen in any given location. Jobs created in a boom disappear just as quickly when prices fall. One study even found that regions with extractive industries suffered lower employment than regions without it.

These fossil fuel “addicts” have been marooned in a dwindling pool of the global economy as service and information-based sectors of the economy grew. “The new reality,” writes Freudenburg, “may be that extractive activities are less likely to lead to development than to a set of symptoms that, if seen in an individual rather than in a community, would be taken as classic signs of addiction.”

Nowhere in the US is the cycle of dependency more acute than in Wyoming—which, if it were a country, would rank among the top producers in the world, just behind Norway.

While the US isn’t Saudi Arabia, says Mark Haggert, an economist at the consultancy Headwaters Economics, “money is equally misappropriated, not through corrupt mechanisms, but through democratic political process handing out tax breaks.” Wyoming enjoys some of the lowest taxes in America. It has no personal or corporate income taxes with minimal sales and property taxes: Residents only pay for 11% of public services. But that leaves them vulnerable to the price of a commodity over which they have no control.

Economic growth outside the oil and gas sector leads to a net loss in tax revenue, according to a 2018 study presented to the Wyoming state legislature. Growth in any sector except oil and gas will cost the state money by demanding more in infrastructure and services than it generates in tax revenue. That gives the state little choice but to double down on the only sector that keeps the government afloat—or leap into the unknown by bidding for new industries and residents, while raising taxes.

“In Wyoming, they call it their moral dilemma,” says Haggert. “Industry pays for the state, and the state agrees to defend the industry. That creates this addiction dynamic.” This fiscal policy—low taxes paired with a dependence on fossil fuel—was a time bomb. The collapse following the coronavirus set it off.

The Cowboy State Looks Ahead

Robert Godby, an economics professor and dean of the University of Wyoming’s Haub School of Environment and Natural Resources, says there is a dawning recognition that this policy has failed to fuel economic growth or sustainable prosperity in Wyoming.

Instead, he says, the state and others like it need to invest in services that will attract a thriving private sector and, yes, higher taxes. “If taxes were everything,” says Godby, “we’d be California and California would be Wyoming,” referencing the high-tax state that has grown into a $3 trillion powerhouse, the largest economy in the US and the fifth-largest economy in the world.

“To fix the problem, you have to do things that are difficult,” from building world-class healthcare to infrastructure for new industries, says Godby. “The last thing businesses want to do is come to a place with declining public services.”

The places that have successfully escaped the resource curse share a few characteristics. First, they sever the direct connection between fossil fuel revenue and annual budgets. Second, they smooth out boom and bust cycles. Finally, they reinvest windfall profits in a different economic future. Botswana plowed money from diamond mines back into a diversified economy. Norway diverted its oil revenue into a sovereign wealth fund. “We were lucky to discover oil,” the fund’s chief executive told Reuters after it passed $1 trillion last year. “The return on the investments in global financial markets has been so high that it can be compared to having discovered oil again,” he said.

No one in the US has done it perfectly. But many states are on their way. After oil and gas drillers came to Alaska in the 1950s, its legislature established a sovereign wealth fund seeded with early royalty revenue. The Alaska Permanent Fund, now valued at $66 billion, delivers more money to the Treasury each year than all taxes and fossil fuel revenue combined. Nevada, once reliant on mining, has turned itself into a tourism powerhouse thanks to Las Vegas. Even Texas, for all its energy wealth, only derives 10% of state revenues from the oil and gas industry.

When fossil fuel royalties from state and federal lands roll in again, states like Wyoming may have a second chance to redesign their economies, argues Godby.

Sovereign wealth funds could endow the states with a permanent source of revenue, even when the oil stops flowing. Federal royalties could be revamped: Instead of splitting half of oil and gas royalties from federal lands within their borders, the US could fund a trust for states to draw on over time. A new royalty structure would decline along with low oil and gas prices, but increase once prices recovered to capture windfall profits and stabilize revenue.

In the past, every oil price collapse has revived talk among politicians of the need to diversify the economy. Resolve fades when a new boom arrives a decade later. The key, Godby argues, would be for all that money to fund an economic transition away from fossil fuels.

It remains to be seen if this time will be different.

WhatsApp might finally sync your chats between iOS and Android

KT profit rises on back of cloud demand