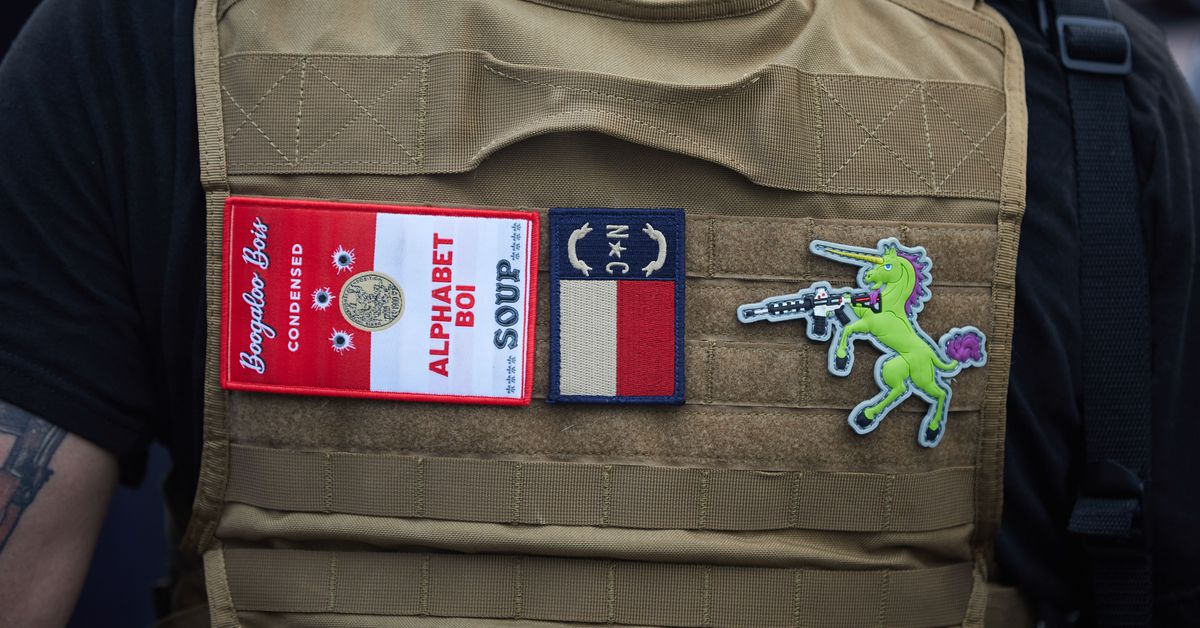 The nationwide protests over police brutality and the murder of George Floyd has attracted attention from some members of an extremist online subculture: the so-called “boogaloo” movement.

Believers in boogaloo ideology — a focus on visible gun ownership with some advocating for a violent civil war against the federal government — have shown up to protests in Minneapolis, Las Vegas, and other cities, sometimes wearing Hawaiian shirts (based on a movement in-joke) and carrying large guns.

In Las Vegas on Wednesday, federal prosecutors announced charges against three “alleged members of the Boogaloo movement” with military ties, accusing them of taking part in a conspiracy to spark violence at protests held over the weekend and charging them with possessing a Molotov cocktail. And in Columbia, South Carolina, an EMS worker believed to have an affiliation to the boogaloo movement was arrested and fired from his job for his role in riots that took place in that city.

Boogaloo — the name derives from the movie Breakin’ 2: Electric Boogaloo — is a loosely connected anti-government movement that has included some white nationalists who believe in an “accelerationist” ideology that encourages spurring civil disorder to eventually foment the breakdown of the political system entirely. But the movement also includes people far outside of white nationalist circles. As CNN reporters Robert Kuznia, Drew Griffin, and Curt Devine put it on June 4, “The boogaloos are an emerging incarnation of extremism that seems to defy easy categorization.”

Their appearances at protests have drawn new attention — though as far as we know now, members of those groups have been a small percentage of those involved in violence. In a May 27 memo, the Department of Homeland Security raised concerns that domestic terror groups could target the protests, including allegations from the FBI that “a white supremacist extremist Telegram channel incited followers to engage in violence and start the ‘boogaloo’ by shooting in a crowd.”

And while frequently using racist images and tropes online, many members of the boogaloo movement have no specific ties to white nationalism or the wider white power movement. (White nationalism is a specific ideology urging the creation of a white ethnostate, not just a different term for “racist.”)

The extremely online nature of the boogaloo — the intense volume of memeing and thick sheen of irony — makes it difficult to parse out what people in the movement want to do or why some would be taking part in protests against police brutality.

And for some boogalooers, members of a movement of sorts based on in-jokes layered upon in-jokes, that confusion is part of the point.

The term boogaloo stems from the 1980s film Breakin’ 2: Electric Boogaloo and is meant to imply a lesser “sequel” to something that has already happened. For many followers, that something would be the Civil War.

The boogaloo movement originated largely on 4chan’s /k/ forum, where users discuss weapons and guns. And research shows that the term “boogaloo” has been used on the forum since 2012, in reference to Obama’s reelection causing a second Civil War (as in Civil War 2: Electric Boogaloo). As radicalization researcher and podcast host Robert Evans told me, “It’s essentially a joke that people wrapped a bunch of different stuff in.”

That vaguely ironic jokiness has remained among people who identify as “Boogaloo Bois.” For example, some people who follow the movement use the terms “big igloo” or “big luau” to avoid saying “boogaloo” on social media platforms — which resulted in a new symbolism for Hawaiian shirts. As Evans explained at the investigatory website Bellingcat:

By this point, Hawaiian shirts (a sartorial necessity at any big luau) had already become a way for individuals to signify their anticipation of the coming civil war. Activists at the Richmond gun rights rally on January 20, 2020, were spotted wearing Hawaiian shirts and full combat gear.

Since then, Hawaiian shirts paired with guns have been a common sight at anti-lockdown protests, with members of existing radical right or “patriot movement” organizations using the garments to signal their affiliation with the Boogaloo movement.

In addition, Evans argued that while some members of the movement, such as it exists, are racist and espouse white nationalist viewpoints, others are not.

Open source materials suggest that, for now, the apocalyptic, anti-government politics of the “Boogaloo Bois” are not monolithically racist/neo-Nazi. As we have observed, some members rail against police shootings of African Americans, and praise black nationalist self defense groups.

This matches what counterterrorism researchers have seen within the movement as it reacts to current events.

On Facebook, Boogaloo supporters debated the best way to express sympathy for the protestors. Some worried that [Black Lives Matter] protestors would distrust the Boogaloo Bois, while others insisted that fighting police would demonstrate to BLM activists that they and the Boogaloo Bois were on the same side.

For example, Chevy McGee, a Colorado man alleged to belong to the boogaloo movement arrested at a protest last week with guns and tactical gear voiced support for Black Lives Matter (through the lens of anti-police sentiment) on social media. But he had also planned to attend an anti-coronavirus shutdown “Reopen Colorado” protest in early May (but was prevented due to the arrest of an associate).

And in Nevada, two men alleged by the government to be part of the boogaloo movement first planned to spark violence at a “Reopen Nevada” protest by setting off smoke bombs to start a panic. When that plan fell through, authorities allege, they and a third man allied by a desire to “violently overthrow the United States government” then planned to blow up a power converter to “to hopefully create civil unrest and rioting throughout Las Vegas” following the death of George Floyd. According to the charging document, the men aimed to model their actions after those of the Irish Republican Army (IRA).

Their main political ideology, and the guiding sentiment of the movement more widely, appears to be anti-government sentiment with a general focus on gun confiscation as a major concern.

JUST CONFIRMED: Denver Police seized these guns and tactical gear from two men who showed up to the protest on Friday. One of them, Chevy McGee, tells me he didn’t break any laws. McGee is part of the “Boogaloo” movement. #9NEWS pic.twitter.com/A5K8psce4j

But it’s even unclear as to whether or not boogaloo followers constitute a distinct political bloc. I spoke with Evans on Tuesday, and he told me, “I’m not really entirely happy calling it a movement, but I don’t know what else to call it.”

A mess of a movement

White nationalists and avowed racists have also taken up the boogaloo mantle (and it’s worth noting that the publicly stated interests of members of the movement may differ from those they may genuinely support). For example, failed House candidate and rabid racist and anti-Semite Paul Nehlen embraced the movement after a shooting at a California synagogue in 2019. The /k/ board, where the movement got its start, is steeped in racist memes and has been for much of its history. And not to mention that at the heart of the boogaloo concept is a desire to recontest the Civil War.

As with the alt-right, the memeing and jokes that make up a large part of the movement can, for some, give effective cover to a desire for violence. Evans told me that for some people who follow the boogaloo movement, there’s an element of the “sunk costs” fallacy at play, as people who began discussing “boogaloo” originally as a joke start taking the idea of a civil war against the government more seriously.

“Most of them [were] joking at first, but they started buying body armor and weaponry and training and stockpiling. And I think over time, the investment that they put into this idea made them more committed to making it happen.”

For many, the first time they’ve heard of the boogaloo movement has been when referenced by politicians alleging that outside influences — like boogalooers, white nationalists, or antifa — are behind the violence that’s beset some American cities in the wake of anti-police brutality protests.

But members of the boogaloo movement are unlikely to be the majority of those arrested at either the protests or the violence. In Minneapolis, Seattle, Cleveland, Dallas, Atlanta, and elsewhere, the majority of those arrested during the protests and violence haven’t been outside agitators traveling the country to start fights and cause violence. Rather, they’ve been people largely from the same places where they are arrested.

As the Washington Post detailed regarding anti-police brutality protests and rioting in Minneapolis:

Of the 57 people arrested through Saturday morning, 47 (82 percent) provided a Minnesota address to authorities, said Jeremy Zoss, a spokesman for the Hennepin County Sheriff’s Office. Most of them gave addresses from Minneapolis and St. Paul, according to data provided to The Washington Post. The 10 other people arrested were from another state or the state wasn’t provided, Zoss said.

And the Southern Poverty Law Center’s Howard Graves told the New York Times, “I have not seen any clear evidence that white supremacists or militiamen are masking up and going out to burn and loot.”

As my colleague Li Zhou detailed, the “outside agitators” trope has a lengthy history:

It’s a statement that activists have heard before, used throughout history to undermine the legitimacy of protests. By framing protests as the result of “outside” influence, lawmakers are able to undercut the validity of the protest itself and question activists’ capacity for organizing such a large-scale movement. At the same time, they’re able to maintain that they actually support activists’ broader cause of combatting police violence, while cracking down on protesters.

It’s not to say that white nationalists or anti-government activists or virtually any group of any political stripe aren’t playing a part in the protests and violence taking place now. Evidence and legal documents say they are. But while boogalooers may be going from state to state to participate in anti-police brutality protests (or earlier this spring, anti-stay-at-home protests), the evidence indicates that they are far from the majority of those protesting.