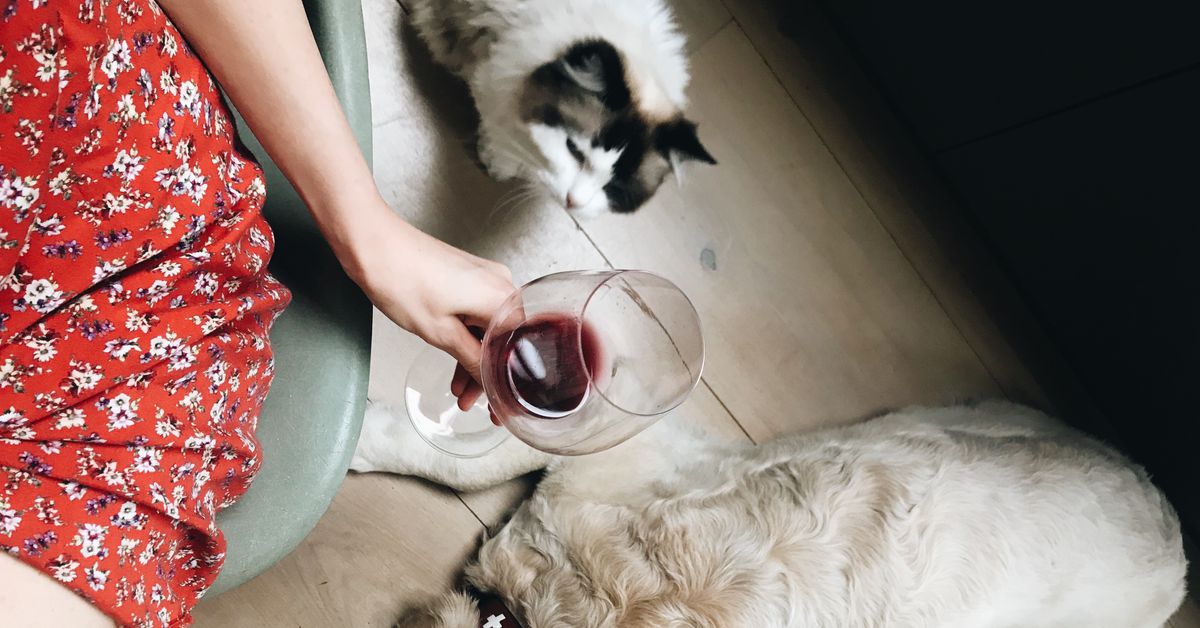 It’s 9:30 in the morning and Ina Garten is emptying a bottle of Grey Goose into a giant cocktail pitcher. “Just what everybody needs, right?” she asks her audience on Instagram, where she has posted a video of herself preparing a Cosmopolitan for breakfast.

In any normal circumstance, a beloved septuagenarian food icon encouraging viewers to drink alcohol alone and well before noon would be attributed to a hilarious accident blamed on an anonymous social media manager, or else become a meme, like when Sandra Lee poured “two shots of vodka” that was actually more like five. Over the past month, though, plenty of Americans have come to the conclusion that there is no wrong time or place to drink, since time works differently now and there is only one place, which is home. Also because things are suddenly very scary.

Perhaps it’s the closure of bars and restaurants, or maybe it’s escapism, if not pure boredom. Whatever the reason, the coronavirus pandemic has lessened the stigma of drinking alone, and of drinking, period. Americans are buying more alcohol, and it’s not just to stock up for the next few weeks or months: According to data from BACtrack, a major brand of portable breathalyzers, people in San Francisco drank more, and earlier in the week, after the city’s shelter-in-place order. Another study of 3,000 workers by Alcohol.org showed that one in three people said they’re more likely to drink in isolation.

It’s difficult to determine how much of these orders are to stockpile for the indeterminate number of weeks or months we’ll be without bars. Whether or not Americans are drinking more overall, though, our habits are certainly changing. After the year in which the biggest alcohol trend was less alcohol, the outbreak of Covid-19 has altered what, and where, we drink.

The main shift? Online orders. Boston-based alcohol delivery platform Drizly saw a sales increase of 461 percent over its expectation during the week of March 30, and each week those numbers continue to grow. More of those sales are also happening earlier in the week.

Liz Paquette, the company’s head of consumer insights, says that for the most part, people are sticking to what they normally drink — red wine has always been a top seller — but that they’re opting for lower-priced bottles. They’re also experimenting with at-home cocktail making. “Where we’re seeing the craziest impact is within liqueurs, cordials, mixers, syrups, bitters, all of those elements that go into making interesting cocktails. Our hypothesis here is that more folks are experimenting at home, especially as a lot of the hospitality industry is at home themselves and doing things like DIY classes online and virtual happy hours and things like that.”

Lindsey Andrews, the founder and CEO of Minibar, another alcohol delivery platform, can attest to that herself. “This is totally anecdotal, but I’m a white wine drinker, and I’ve found myself mixing up different new cocktails to mix it up. I’ve been making an aperol spritz one night or a spicy margarita another night way more than I used to, just for variety.”

Minibar has seen a 75 percent increase in orders and a 373 percent jump in new buyers, while customers, on average, are ordering 22 percent more than they normally would. The top seller? Oyster Bay Sauvignon Blanc, a white wine that typically retails for around 10 bucks. “We’ve seen a decrease in orders of sparkling wine and champagne because this isn’t a celebratory time, unfortunately,” Andrews says. “A fun fact is Corona beer used to not be in our top three or four beers, and it’s now No. 3. People think it’s ironic or something.”

Many brick-and-mortar liquor stores are pivoting to home deliveries or contactless pickups, too. At DaveCo Liquors in Thornton, Colorado, which at one point was awarded a Guinness World Record for being the largest liquor store in the world, “it’s been crazy,” according to manager Ted Sutton. “Lotta beer. Lotta whiskey. Right now there’s a run going on tonic. I guess there’s something going on all over the internet that drinking tonic is supposed to help you with the virus.” (Reader, it does not.) “I’m selling a hell of a lot of Busch beer right now,” Sutton says. Plus, “I can’t keep the boxed wine on the shelf.”

This tracks with what other liquor stores are noticing: Inexpensive wine has been especially popular in liquor stores all over New York City. In an interview with New York magazine, Mark Schwartz of Little Mo Wine in Brooklyn said, “We sell a very good grade of box wine, it’s not junky, but people are like, “That’s where I’m going!” So they buy four boxes, which is equivalent to 16 bottles of wine.”

Sure, a lot of that is likely due to stockpiling — as people reduce the number of trips to the grocery and liquor store, they’re inclined to buy more — but Wine.com founder Michael Osborn told VinePair that he “wouldn’t call it pantry loading. But I would say folks are serious about having wine every night for their meal.”

I’ve noticed a shift in my own alcohol consumption. While I’m drinking less than I normally would on a Friday or Saturday night out (due to there not being an “out” anymore), I’ve been drinking more in the first half of the week, and earlier in the day. I’ve viewed my evening (or, uh, afternoon) glasses of pinot noir as a way to separate the endless hours on the couch into distinct chunks of time: “working” and “drinking,” usually while playing Animal Crossing or watching my friends try to bake something on their Instagram Stories.

There is no longer AM and PM. There is just “coffee time” and “wine time.”

Finnish people have name for this. It’s called kalsarikännit, which translates roughly to “pantsdrunk.” Kalsarikännit, like many Nordic words, went slightly viral a few years ago because it packages pleasure as something virtuous and guilt-free. Americans so often feel as though we need permission to be unproductive, that in order to drink wine on the couch in our underwear it needs to be part of a foreign lifestyle-wellness fad.

Coronavirus offers a similar excuse for such behaviors: There are no bars, no restaurants, no parties. There is no one to impress, besides the people who already see us before we brush our teeth in the morning. The other day my boyfriend cracked a White Claw before noon, and there was no need for me to ask why. I just laughed.

Drinking alone has always been a fraught concept. It’s one of the classic markers of a drinking problem, and indeed, quarantine has been especially rough on people with alcohol or other substance addictions, as well as those with eating disorders. Yet plenty of other people have an even more difficult time abstaining from alcohol when they’re in crowds, and the stigma of the idea that the act of drinking alone itself leads to addiction is seen as spurious by at least some experts.

Besides being shorthand for problematic, drinking alone has traditionally be seen as just sad. New York Times wine critic Eric Asimov writes that in questions about drinking alone, “Too often, the answer is a finger wag.”

Instead, he argues that “the underlying social attitudes [these stigmas] indicate all underscore the Puritanical notion that drinking alcohol, regardless of the reason, is wrong. They suggest that the whole point of drinking is self-medication in one form or another, whether for heartache or ambient anxiety.”

Get our newsletter in your inbox twice a week.