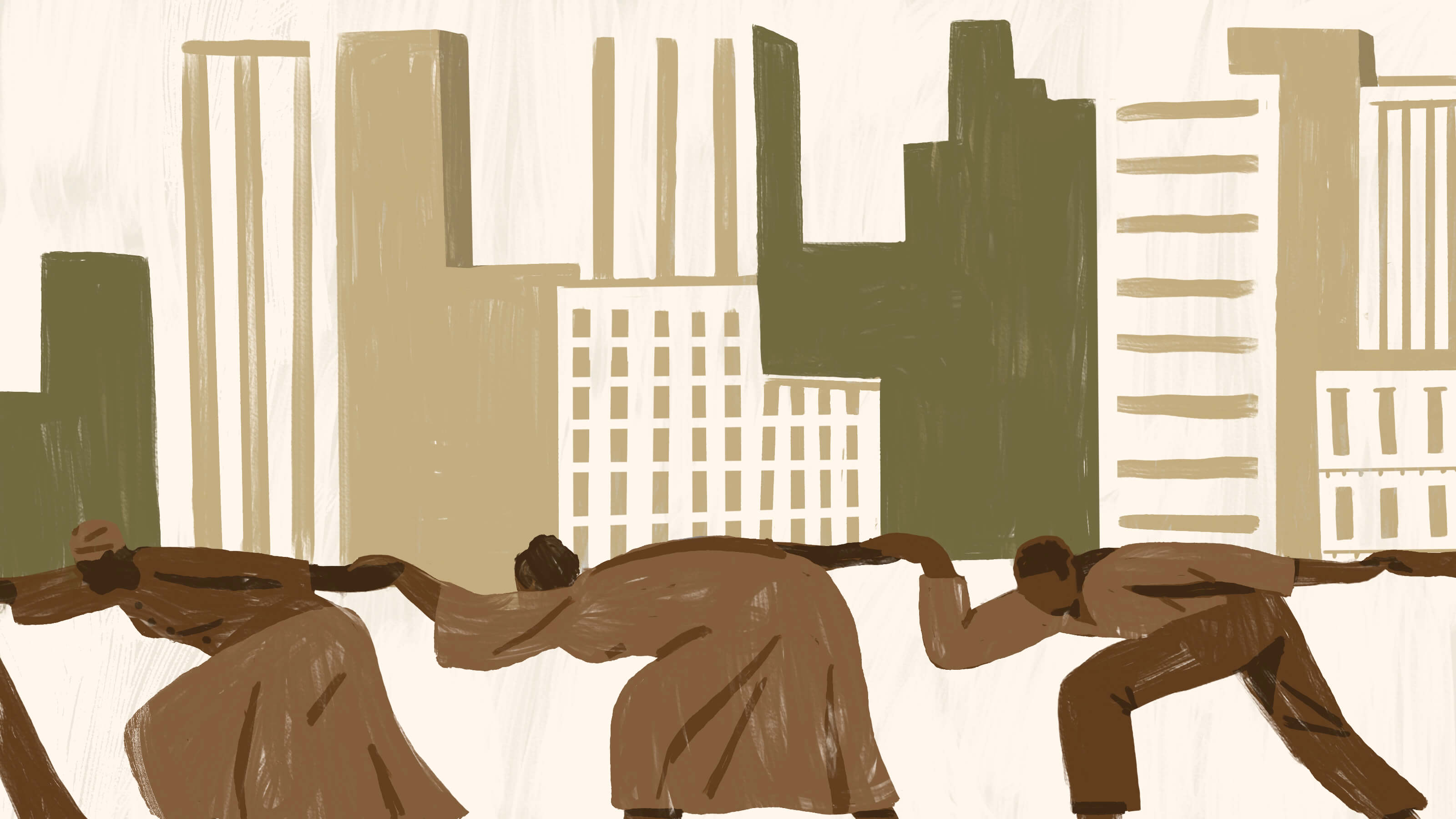 In the weeks following George Floyd’s killing, as protests against racism swept the US, it felt as if the whole of corporate America had suddenly decided to advertise its anti-racist soul.

A lot of those pronouncements rang hollow. Teams in the National Football League, for instance, came out in support of Black lives, despite having ostracized Colin Kaepernick for criticizing police brutality. Many of the companies had not only failed to speak up against racism in the past; they had profited from racist policies and institutions.

Some researchers and activists have begun to ask what responsibility—moral, financial, or otherwise—companies should have as the beneficiaries of an unjust system, and how they should make up for this complicity.

“These institutions support not just the history of slavery, but the world that slavery created,” Dave Ragland, the director of the Grassroots Reparations Campaign and a researcher in peace studies at the Pacific Graduate Institute, tells Quartz. As arguably the greatest center of power in the US, corporations have played a fundamental part in upholding racial inequality. They also hold great influence in pushing forward the movement for reparations.

A legacy of inequality

Its legacy—and that of the following years of segregation, discriminatory policies, and mass incarceration—is tangible in the wealth gap between Black and white Americans. From average household income, to home ownership, to access to higher education, the divide is visible in all aspects of society, it’s particularly clear in corporations and large businesses.

Just 9.5% of private or closely held public US businesses are Black-owned, and together they make 1% of the income of white-owned businesses. (According to the census, 13.4% of people in the US are Black; another 2.8% identify as two or more races.) Less than 5% of Black-owned businesses are big enough to have any employees, but they make over two thirds of the total income generated by Black businesses. The gap between the number, size, and income of these businesses points to the main issue with Black businesses: There is plenty of entrepreneurship, but not enough capital. When Black entrepreneurs can start businesses, they often don’t have much investment—only 1% of venture capital, for instance, is invested in businesses with Black founders. This virtually ensures Black-owned businesses stay small.

The disparity isn’t just a consequence of the system; it’s a foundational element. After all, American wealth was built for whites through the free labor of Blacks.

Some companies that exist today had direct involvement with slavery, or the industries it sustained, such as cotton. Take JPMorgan Chase bank: its subsidiaries Louisiana’s Citizens’ Bank and Canal Bank owned slaves. Recently bankrupt Brooks Brothers got its start making uniforms for slaves, and Aetna insured them as their owners’ property. The Jesuits were able to fund their large network of educational institutions, including Georgetown University, by selling their slaves. As MIT history professor Craig Steven Wilder showed in his book Ebony and Ivy, academia contributed to keeping slavery alive, including by providing theoretical frameworks to rationalize its existence.

In the years after slavery, a number of companies became rich through segregation, redlining, and mass incarceration. Others maintained or exploited racial inequalities, through racist hiring practices, or driving gentrification. In short, with the few exceptions of Black-run and truly inclusive companies, the entire American corporate system has been complicit in racism.

How to close the wealth gap

Though some American companies may have begun to acknowledge their role in upholding white supremacy, few have apologized for it, and none has made payments framed as reparations—in the way that, for instance, German companies did with Holocaust victims.

Among reparations activists, there are different ways of thinking about how companies should compensate Black Americans for their role in slavery and the racist institutions that followed.

In most cases, these companies didn’t break the law in place at the time. That means they can’t be expected to lead on the issue of reparations, according to some activists and researchers.

“Everything that they did, which was evil, was also legal. And who is the authority that made these kinds of activities legal? It’s the United States, it’s the federal government,” says William Darity, a professor at Duke University and co-author of From Here to Equality, a landmark book making the case for reparations. So, he says, while a comprehensive reparation bill may contain sections about corporations found to be complicit in slavery or segregation, the bulk of the reparations payments should still be made by the federal government.

But other activists and researchers think that while corporations aren’t legally responsible for their actions, they should still be part of the process intended to close the wealth gap between Black and white Americans.

According to Ragland, the peace studies researcher, such a process needs to go far beyond corporate responsibility to reach the individuals who enabled an unequal system. “We should look at a number of things: corporate governance, who was hired, who wasn’t hired, what were [the company’s] investments—an exhaustive process that examines the culpability and then deals with repair based on that,” he says.

Those who made profits from slavery aren’t just the institutions, but their founders, executives, employees—and, crucially, their descendants, who were able to count on wealth built through exploitation and discrimination. “I believe[…] that if individuals and their families benefited from [racism and] are not accountable, then the harm is continued,” Ragland says.

Ragland concedes his approach might seem impractical, yet he doesn’t feel that is reason enough to give up on a true compensation for what was stolen—be it labor, wealth, or opportunities. Centuries of slavery and racial injustice are an aberration big enough to warrant a proportionally ambitious attempt at reparation.

He envisions companies embarking on a radical truth-seeking process that identifies everyone responsible for perpetrating racial inequality and results in a morally and financially satisfactory plan of atonement. For instance, he says, “a truth-seeking process for Chase bank [would] examine who were the people who audit the [slavery-related] decision? Did they actually own slaves? Did they sell slaves? Where did that income go?” Once the process established who benefitted from the company’s behavior, the decision-makers could determine who would be responsible for repaying, and how.

The question of who should be on the receiving end of reparations is also a matter of debate. While some activists and experts think that the beneficiaries should be the direct descendants of slaves, others argue that reparations should be distributed more widely.

“Slavery didn’t end, it just morphed into different things,” says Karran Harper Royal, the founder of Descendants of Jesuit Enslaved Ancestors, a community trying to get compensation from the Jesuits from their slave-holding past. Although her husband is a direct descendant of one of Georgetown’s 272 slaves, Royal doesn’t think reparations should stop at those who can trace their blood lineage to chattel slavery.

“It can’t be sliced up—it needs to be comprehensive. You can’t just say, ‘Well, your people came here in 1876, that was after slavery so you don’t get anything,’” Royal says. “They had ancestors who lived through Jim Crow! To me, [trying to distinguish between the two] is like splitting hairs.”

Where the money flows

Assuming that companies do come around to directing money to Black Americans, there’s the issue of what the reparations would look like. Should money just be transferred to the bank accounts of the descendants of slaves? Should they come in the form of educational support? Maybe the money could move through other kinds of programs no one’s thought of yet?

Darity and Mullen are pretty clear about how they think corporations should make amends. In their work, they argue institutions that acknowledge their complicity in slavery and systemic racism should, first and foremost, put their resources into lobbying for a congressional reparation program. Then they should focus on the way they do business, and be proactive in the inclusion and promotion of Black talent, particularly in leadership roles—not just as a one-off or through special programs, but as a base condition of their business.

While nothing stops companies from setting up separate programs—ranging from enhanced employment opportunities, to education support, all the way to money transfers—to benefit Black people who were exploited by their past conduct, it would be essentially impossible to establish how much each institution owes, and how. “There are so many individuals, colleges, universities, corporations, other types of organizations that have such a high degree of complicity […] that it would be very difficult to parse out their individual bills,” says Darity.

According to Darity and Mullen’s research, there is essentially no way to accomplish full reparations without a federal bill, so lobbying for it is the most effective action private companies can take—and while it is not one that necessarily benefits the brand’s public image, it shows actual commitment to changing the power structure.

Not everyone, however, thinks a federal reparation bill would absolve companies from taking direct financial responsibility. Royal thinks there should be both federal government actions, which should benefit all Black Americans who have suffered the economic impact of an unequal system, and private initiatives that could focus more on the families directly affected by the actions of a company or institution.

Royal’s husband has several ancestors who were enslaved by the Jesuits. Since 2019 Georgetown University has required students to pay a fee that raised about $400,000 a year to repay the descendants of slaves owned by their university. Royal thinks that’s not enough, and would like to see a much more comprehensive program that requires all other Jesuit universities to compensate the descendants of slaves they owned. “I would like something done so that there is access to home ownership, capital for business, education,” Royal says, “and then everyone to be educated about chattel slavery in an accurate manner.”

Robert Smith, the CEO of private equity firm Vista Equity Partners and the wealthiest African-American according to Forbes’s ranking, also has expressed a belief that corporations should use their capital to repay the communities their company has negatively impacted.

But whether corporate reparations are paid through programs (for instance supporting Black home ownership or education), individual wealth redistribution, or by lobbying the federal government, their intention must be the same: to eliminate the wealth gap between Black and white Americans.

“Acts of atonement are fine, but I would be very, very cautious about calling that reparations, if it does not have the effect of raising black assets to a level that is sufficient to erase the Black-white wealth differential,” warns Darity.

Closing a wealth gap so wide will be an unprecedented task, no matter how it’s done. But the system that has maintained it for centuries has the power, and surely the money, to make it happen.

: Royal is married to a direct descendant of Jesuit-owned slaves, she isn’t one herself.

iOS 14 home screen widgets: How to add and customize your iPhone

Scale AI hits $3.5B valuation as its turns the AI boom into a venture bonanza