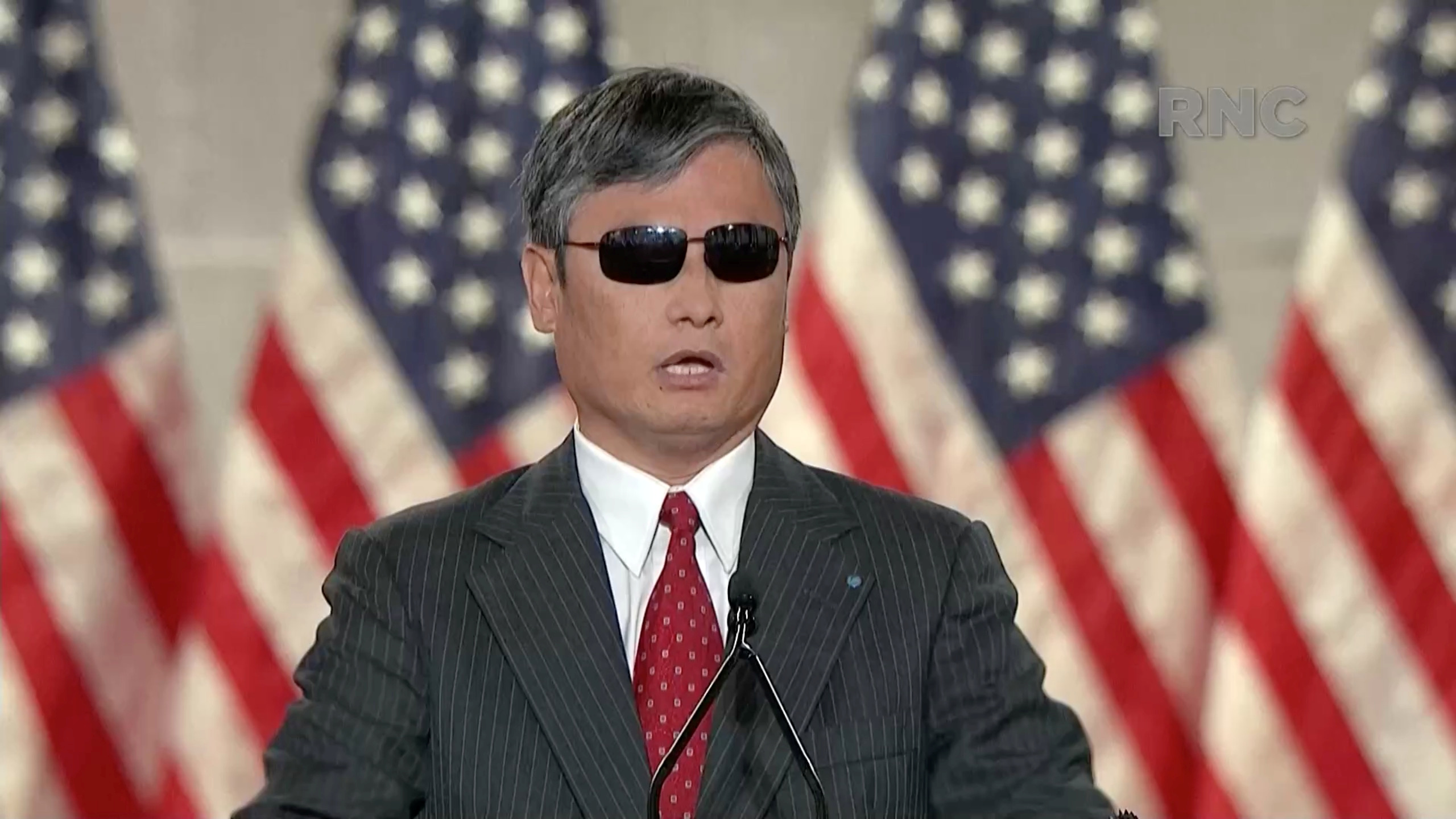 Among the long list of speakers attending the third night of the Republican convention, a name unfamiliar to most Americans quickly stood out.

Chen Guangcheng, a blind Chinese human rights activist who fled to the US in 2012, used his spot on Wednesday (Aug. 26) to praise president Donald Trump for leading the fight against China’s aggression.

“Standing up to fight unfairness is not easy, I know. So does President Trump,” said Chen, who also criticized the Obama administration, which negotiated his departure from China, for appeasing the Chinese Communist Party and allowing it to “infiltrate and corrode” the global community.

For some in the Chinese diaspora, his appearance—and the outspoken support of other Chinese exiles for Trump—was an uncomfortable reminder of the willingness of some Chinese dissidents to dismiss rights battles in their adopted home in their quest to find strong allies against the Communist Party. That dissonance has become more noticeable in recent years, after renewed Black Lives Matter protests in the US against systemic oppression and police brutality, a movement that many Republicans, including Trump, have demeaned.

Supporting Trump, and other conservative figures, can appear sharply at odds with human rights beliefs the activists defended back in China. There, Chen was persecuted for speaking against the one-child policy. As a self-taught lawyer, he represented women facing forced forced abortions and sterilization under the policy, which ended in recent years. In 2011, his case gained global prominence after Christian Bale, the Batman star, was punched by plainclothes guards when the actor tried to meet Chen, then under house arrest with his family. Later they made a dramatic escape and sought refuge at the US embassy in Beijing, nearly setting off a diplomatic crisis between the US and China.

“I know he has been a Trump supporter, but I didn’t expect him to go as far as to endorse Trump publicly,” said Teng Biao, a US-based Chinese human rights lawyer who said he is friends with Chen.

Trump, who once famously called the 1989 Tiananmen students protests a “riot,” has backed a fervently anti-immigration agenda and refused to condemn white supremacists. Yet, he has also put enormous pressure on China, by placing tariffs on most of its goods, putting sanctions on Chinese and Hong Kong officials for violating the territory’s autonomy, and threatening China’s tech companies. That has led many exiles to pin their hopes on him to further counter the Party, when few governments seem willing to.

“For many Chinese dissidents, their highest or even only goal in life is to fight with the Chinese Communist Party, which explains why they are firm Trump supporters as they think the administration has the harshest stance against China,” said Teng.

Chen is not the only Chinese dissident to back Trump in their campaign against Beijing’s authoritarianism—while at the same time amplifying far-right conspiracy theories or even racist views against people who are themselves fighting state violence. This week, Chen, for example, tweeted a video showing a pro-Trump protester defacing a Black Lives Matter mural over which he wrote “Freedom” He also retweeted a video of protesters accompanied by a Chinese-language tweet that blamed the Democratic Party for inciting “black terror.” Other retweets included a post claiming the US media covers up black violence against white people, and a post with a screenshot of a chart purporting to show intelligence differences according to race and ethnicity.

Another US-based dissident, Sui Muqing, a former human rights lawyer in Guangzhou, who has been very supportive of anti-government protesters in Hong Kong, has also called the Black Lives Matter campaign a riot, labeling it an “ill-natured” social movement. Also a Trump supporter, he said people who criticize Chen are being narrow-minded. Gao Yu, a Chinese journalist who was released in 2019 after being imprisoned four years earlier for leaking “state secrets” about Beijing’s plans to suppress human rights activism, also frequently shares posts advocating for Trump’s re-election, as does Xia Yeliang, a US-based former Chinese professor who signed a 2008 pro-democracy manifesto.

In some cases, Teng explained, dissidents aren’t able to empathize with the Black Lives Matter movement because they feel the US has free expression and democracy, and so protesters should be able find other channels for voicing their discontent instead of taking to the streets. In addition, many older Chinese dissidents also still use WeChat and other Chinese media as their main source of information because they aren’t as comfortable in English, and that too shapes their views on US movements—criticism of US social justice activism and frequent labeling of the police brutality protests as “riots” are common on Chinese-language social media.

At times dissidents are also drawn to conservative beliefs through causes that appear familiar—such as opposing abortion—but that have quite different politics in the US and China, noted Teng.

“Eventually, if Trump loses this election then some of his dissident supporters might become quiet. But their conservative views won’t be able to be reversed overnight,” said the lawyer.