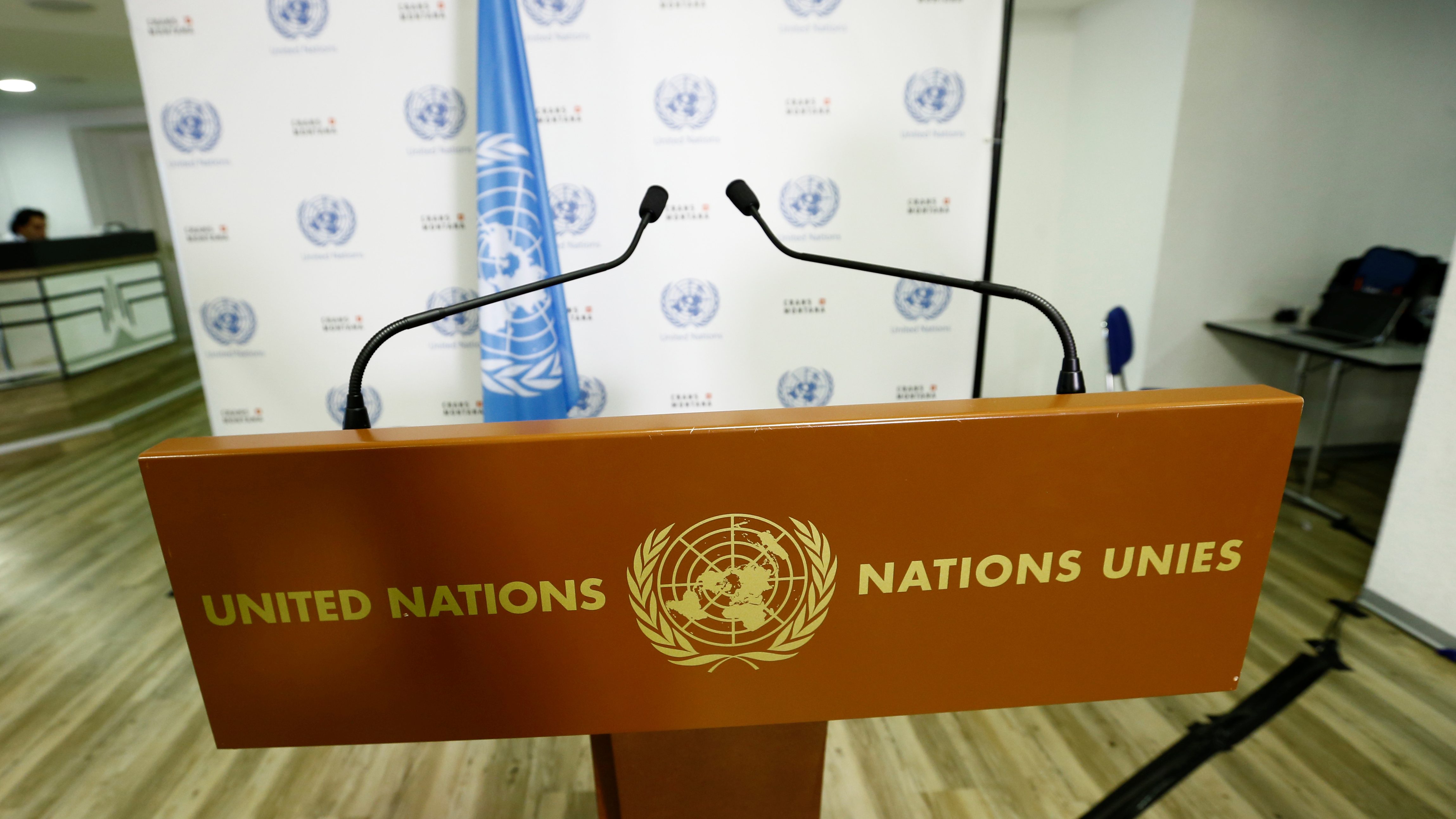 In front of him, the 1,800 seat amphitheater in the UN building in New York was all but empty: A few delegates dotted the room, distancing and wearing masks. “The Covid-19 pandemic is a crisis unlike any in our lifetime, and so this year’s General Assembly session will be unlike any other, too” said UN Secretary-General António Guterres just a day later, introducing a report on the UN’s response to Covid-19.

This year’s general assembly was always going to be historic. Three-quarters of a century called for celebrations as well as an assessment of the work done. But as it ruined every other plan for 2020, the pandemic turned the gathering of nations to the mother of all zoom calls: Most heads of states will deliver their addresses via videoconference, and pretty much all the meetings and networking events that every September turn New York City’s midtown into the most cosmopolitan of traffic nightmares will be held remotely, somehow.

There is something uncanny about Covid-19 disrupting the 75th general assembly: A global crisis of this scale is arguably the very reason the UN charter was signed in San Francisco in 1945. It was created as an act of hope and optimism for the future as World War II was a few months, and many horrific deaths, from its end.

If it is true that nothing unites more than a common enemy, coronavirus would be the perfect opportunity to mobilize “the international machinery” (as the UN charter refers to foreign cooperation). But while there are many systems within the UN that could (and have, although imperfectly and insufficiently) helped coordination, Covid-19 hit the world just as nationalism and isolationism is peaking. In many member states—from the UK, to the US, to India—the past few years have seen the rise of strong nationalistic movements, and the distrust for multilateral cooperation and institutions like the UN have continued even as governments deal with a quintessentially global threat.

“The basic value of global solidarity is not as big as it was 75 years ago,” Thure Krarup, the director for sustainable development at the UN Foundation, a US nonprofit that supports the UN’s development program Quartz.

The global opinion of the UN remains overwhelmingly favorable. Overall, more than 60% are in favor of the institution, and in certain countries the approval rate is higher than 80%.

There’s good reason for it. Since the UN’s founding, much has been achieved thanks to its role, both as an active player and as a coordinator of other resources. While some of its deployments failed (in former Yugoslavia, for instance, or Somalia), its peacekeeping force conducted successful operations in many countries, including Cambodia, Namibia, and Timor Leste. Its humanitarian interventions have spared millions of deaths. Its long-term development coordination through its agencies like UNICEF and the World Health Organization (WHO) improved life in tangible ways. Covid-19 setbacks aside, it is thanks to the UN’s leadership that all around the world life expectancy is the highest it’s ever been, as are education and access to health, while childhood mortality and extreme poverty have been slashed.

At the same time, supporters of nationalistic parties are cynical about international cooperation and diffident toward the UN. As they become the majority in a growing number of countries, their governments are turning their back toward multilateral coordination, limiting the power of the UN.

“In private, a lot of diplomats are extremely dismissive of the United Nations, they are very skeptical, they make fun of United Nations’ staff all the time,” says Séverine Autesserre, a professor of political science at Columbia University. In turn, she says, this has generated a defensive approach within the UN, as its staff feels under siege, and subject to excessive criticism.

This is especially true since the US, which maintains oversized power in the organization, is pulling away from it. The administration of president Donald Trump has denied funding to the UN Population Fund, it has refused to cooperate with UN human rights investigators about potential violations at the US’s southern border, it has imposed sanctions on the International Criminal Court, and is set to leave the World Health Organization (WHO) in July 2021.

The pandemic exposed the WHO’s lack of power. Like much of the UN, it can set guidelines, but has no power to enforce them; it can ask for state cooperation in scientific investigations, but has no power to demand it. As it tried to navigate the political complexities of the pandemic, the WHO was accused of not being harsh enough on China, of being slow in its response, and being contradictory in its messaging (notably, it only confirmed the importance of wearing masks in June).

The UN was scarcely equipped to handle the crisis—and still isn’t. It needs over $10 billion to deliver an adequate humanitarian response to the pandemic, but so far raised less than $2.5 billion from member states. It designed a comprehensive socioeconomic intervention plan—which includes supporting existing health care system, and assisting in unemployment and job recovery—but of the $1 billion required to put it in place it has secured less than $60 million.

Many countries, notably the US, have focused their resources on getting treatments and vaccines for their citizens, even at the cost of depleting the stocks for others. Despite the WHO warning that “if Covid-19 is anywhere, it’s everywhere,” vaccine nationalism risks slowing down the end of the pandemic, and could result in twice as many deaths as a release planned across all countries.

“Clearly the global health machinery has not been sufficient to tackle this crisis,” says Mark Suzman, the CEO of the Gates Foundation. While there are calls for a revitalization of an effective multilateral system, he says, it is hard to tell whether they will move beyond rhetorical support. “The sad truth is we know at a policy level it’s often very hard to incentivize investment in the right direction,” he adds.

The lack on funding is real at many levels, since many members have not paid their fair share in years. Krarup says cost-cutting measures have been very visible recently, and included dry fountains and grounded elevators in the UN headquarters. “[The state of the UN] is a litmus test of where the world is at,” he says.

But for all the reasons of concern, some hope Covid-19 will be the right shock to push some change within the UN.  The organization has been undergoing a reform process for years, but it’s picking up speed in the light of the crisis. “Maybe [Covid-19] is the enemy that can rally us all,” says Krarup. This year might be remembered as an annus horribilis that prompted a renewed embracing of the UN, he says.

And while larger reform is underway, there are changes that can be made somewhat quickly, taking advantage of this moment.

One is changing its approach toward poorer, nonwestern countries. As Columbia’s Autesserre discusses in her upcoming book The Frontlines of Peace, too much of the UN’s work is done top-down: Be it for peacekeeping, humanitarian intervention, or development, the strategies are developed in New York or Geneva. The countries that need intervention have barely a say on them, and if so, it’s only through high-level officials.

But interventions are more effective, not to mention economical, when they are engineered with the input of local communities, and the UN could foster their leadership by giving more power to local hires over international envoys. “Covid is an opportunity to put that [approach] in place precisely because of all the restrictions on travel,” she says. This would also have the effect of restoring faith in the UN as an ally and not a foreign force, which would be seen as less of a foreign body and more of an actor working with the community.

After all, perhaps communities can lead where nations aren’t—even in wealthy countries. In many ways, the message of the UN still resonates very strongly, especially for young people. The movement to stop climate change, or the protests against racism—these are very much in line with the UN values and mission. “The UN is what member states make it,” Krarup says, noting that “we the peoples of the United Nations” as the UN Charter’s preamble reads, means first of all the world’s citizens—not their governments.