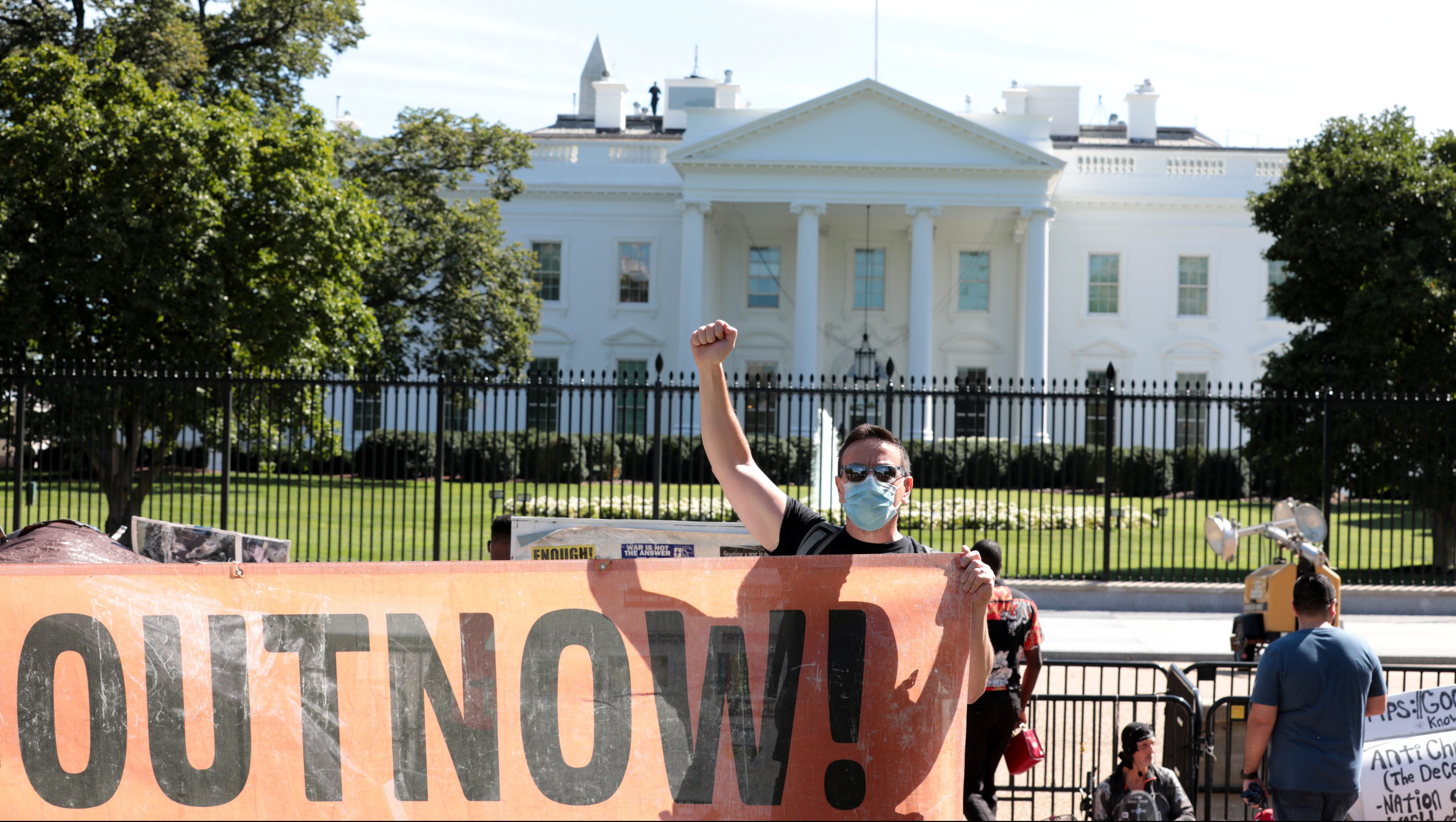 ﻿On the evening of Nov. 3, and through the following days, liberal American voters who hoped to see a blue tsunami overtake Congress and the White House watched instead as a near imperceptible tide slowly rose to give Joe Biden just enough of an edge in critical states to make him the projected winner.

It might be disappointing to see that even after four years of increasingly divisive and unpresidential behavior, a mishandled pandemic that killed over 235,000 people, and deploying the National Guard to stifle protests against racism, Donald Trump still received more than 71 million votes.

The margin might be small—especially when seen through the lens of the US’s peculiar electoral system—but the victory itself is actually rather significant.

In this election, Trump had more than the normal advantages of the incumbent. He had the charm of a strongman, and a cult-like following among his voters. His power was very much anchored to the personality, not the role. These traits characterize authoritarian leaders, and if strongmen run for re-election, they tend to win.

“Americans have exercised their rights to vote to remove an autocrat- worshiping criminal from power. This is rare in history,” says Ruth Ben-Ghiat, a history professor at New York University and the author of Strongmen: Mussolini to the Present.

All over the world—from Brazil, to India, to the UK, to Italy—rightwing populists and authoritarians are on the rise. Where they are already in power and have run for second terms, they have typically won again with even larger mandates. Not in the US.

A look at the celebrations in the streets should be telling, Ben-Ghiat adds: If it resembles images of jubilation after the end of a war, she says, it’s because in some ways, it is. “There’s been enough outrage and pushback from many sectors of society to mobilize and recognize the damage, and so America will become one of the very few countries that was able to turn the process of authoritarian capture,” she says.

Since he stepped onto the presidential campaign stage in 2016, Trump’s embrace of authoritarianism has only grown. Several times through the course of his presidency, he expressed his contempt of democratic institutions: He demonized the press, responded to peaceful protests with military power, was equivocal in his condemnation of white supremacy, and abruptly fired anyone who failed to show loyalty.

Things have only worsened since Election Day: Not only is the president still refusing to acknowledge the democratic results, but he asked both that legitimately cast votes not be counted (under the presumption they might not favor him), and claimed victory even as projections indicated Biden was favored.

“What can be more undemocratic, and in many ways criminal in the sense of stealing an election, than a declaration [of victory] that is not supported by facts?” asks Federico Finchelstein, a professor of history at the New School for Social Research in New York and the author of From Fascism to Populism in History.

Finchelstein, who has researched the role of lying in authoritarian regimes, says Trump’s words were an attempt to fire up his most loyal voters, but also a reflection of the stage of authoritarianism in which the leader’s words are considered truth, above factual challenges.

Trump’s behavior also shows another fascist-like trait: the believe in legitimacy over legality, where legitimacy is guaranteed by holding power, regardless of the means by which it was obtained. “If the law helps, great, but otherwise they will at least try to ignore it,” says Finchelstein

A combination of Trump’s “relaxed relationship with the truth” (as Mitt Romney described it), and his self-serving approach to democratic legality was evident even in his reaction to the 2016 election, says Finchelstein. Then, he accepted the election as fair because he won, yet at the same time decried them as irregular claiming he had actually won the popular vote, too, although Hillary Clinton received roughly 3 million more votes than Trump.

Where do we go from here?

A second Trump term, recent history indicates and experts believe, would have further exacerbated the president authoritarian tendencies. As the past few days have shown, even a defeat seems to have had a similar effect.

But electing Joe Biden to the presidency does not represent, as many suggest “the end of our long national nightmare.” That might be little more than wishful thinking.

“Trumpism, or at least what Trump represents, is here to stay,” says Finchelstein, warning against the urge to declare the past four years a parenthesis in an otherwise healthy democracy. After the end of World War II and the fascist regimes in Europe, he warns, that was a position held by many, including high-profile intellectuals, but they were proven wrong as various form of authoritarianism continued (and continue to) emerge in European countries. In fact, thinking of fascism or authoritarianism as an aberration, and not the expressions of tendencies that are embedded within a country, can be dangerous to the work of uprooting them.

“We had Trump for four years, and he’s done an immense amount of damage, which I believe we have not even registered or digested yet,” says Ben-Ghiat. One important victim, so to speak, is the Republican party. Trump, who came in as a party outsider, was able to bend the party to his whims, and turn it into an extension of his persona. “The [GOP] 2020 platform doesn’t even have any content except obedience to Trump,” she says.

Even the behavior of prominent Republicans, who are overwhelmingly supporting the president’s refusal to concede the election, is evidence of how much the party is entangled with Trump, and how hard it is—and likely will be—for it to gain independence from the influence of his ideology and politics. “The GOP is an authoritarian party; it’s become a far-right party,” Ben-Ghiat says. “They are not really playing in the democratic field anymore, they really have at least one foot outside.”

The influence of Trump might show itself quite soon, she believes. “I’m fairly sure that in 2024, either Ivanka Trump or Don Jr. will be a candidate for office,” she says. This would start building a dynasty that would carry Trumpism on well after its founder. Unless the new administration and supporters of democracy in and outside politics deliberately work to solidify democratic institutions and values, there is risk of a falling back.

There are, however, those who welcome the election as turning the page on Trump—perhaps not for the Republican party, but for America. Richard Wolffe, a columnist for the Guardian, writes that Biden’s margin of victory, at nearly 5 million votes, is enough to bid adieu to the idea that Trump has a great ability to connect with voters. “There’s no demagogue quite like a sad, defeated demagogue. There’s no strongman quite like a weakman. And there’s no populism without popular appeal,” he wrote, calling the results a defeat not just for Trump but for his politics, too.

Notably, Joe Biden had announced his candidacy in 2019 by saying Trump was “an aberration” and his addresses since the election have similarly framed the past four years as a moment that America will move past toward a time of healing and unity.

But those who see the threat of authoritarianism still looming—if from further away—think America’s democracy can still be placed on more solid ground. The US election is a sign that democracies can stand up against authoritarianism, and it sent a message to the rest of the world, where the rightwing populist wave continues to advance. But it’s important for the US to focus on reform and maintaining its democratic momentum. “We need to make very sure that extremism is recognized and curbed,” says Ben-Ghiat.

There is another important, and separate, intervention to make, says Finchelstein. The past two elections have shown there is too great a discrepancy between the popular and electoral college votes, and the system should be reformed so it more closely reflects the people’s vote. Otherwise, he fears, it will become increasingly harder to mobilize voters, convince them their votes actually matter, and build confidence in the democratic process.

“What kind of democracy is a democracy where the person that gets the most votes finds it so difficult to win?” he asks.