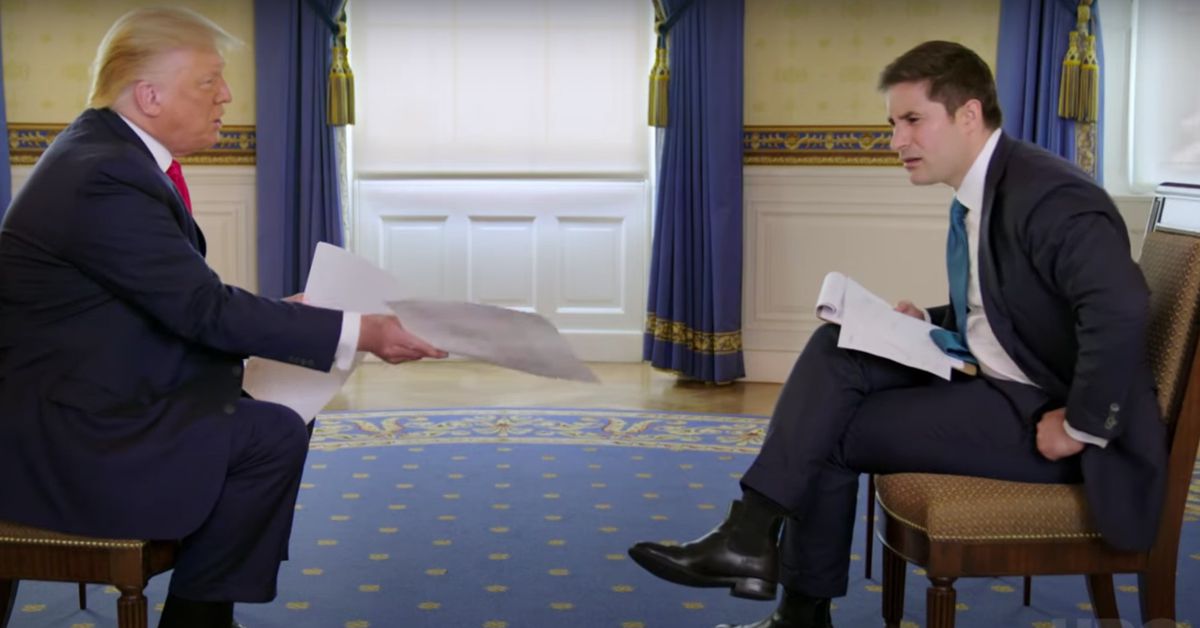 President Donald Trump’s interview with Jonathan Swan of Axios began with him telling a dizzying string of lies about his coronavirus response and the state of the pandemic in the country. It ended with Trump making the death of civil rights leader John Lewis about himself. It didn’t go any better in between.

For the second time in a month, Trump’s attempt to sit down for an interview with a journalist willing to challenge him ended in disaster. Over the course of 37 minutes, Swan repeatedly exposed Trump’s inability to respond to the most basic of follow-up questions.

Trump’s difficulty with push-back is often concealed when he answers questions beside a loud helicopter or in the friendly confines of Sean Hannity’s show. But the Swan interview, which came out just two weeks after Trump’s similarly disastrous performance on Chris Wallace’s show, highlighted the degree to which Trump is unable to defend his record in the face of even mildly challenging questions.

Trump’s coronavirus comments continue to be an embarrassment

Perhaps the most terrifying part of the interview came early on when Swan peppered Trump with a string of questions about why he isn’t doing more to fight the coronavirus and why the virus has hit the US so much harder than other comparable countries.

Asked how he can say the pandemic is under control when roughly 1,000 Americans are dying from Covid-19 each day, Trump said, remarkably, that “it is what it is.”

“They are dying. That’s true. It is what it is. … It’s under control as much as you can control it.”

On the topic of America’s struggles with coronavirus testing, including long wait times for test results that render testing almost worthless, Trump resorted to making stuff up.

“There are those that say you can’t test too much. You know that?” Trump said at one point.

“Who says that?” Swan responded.

“What books?” Swan challenged, but no answer was forthcoming. Instead, Trump said that “when I took over we didn’t even have a test” — as if the Obama administration was supposed to develop a test for a virus that didn’t exist until nearly three years after Trump’s inauguration.

A few minutes later, just as he did on Wallace’s show, Trump waved around pieces of paper with charts and graphs in an unconvincing effort to make it seem as though the US coronavirus death toll of more than 150,000 isn’t as bad as it seems.

Trump responded by suggesting South Korea is faking its numbers. But when Swan challenged him on that point, Trump quickly changed the topic back to his pieces of paper.

“I mean, 1,000 Americans die a day,” Swan responded. “If hospital rates were going down and deaths were going down, I’d say terrific, you deserve to be praised for testing. But they’re all going up!

Swan: “Why can’t I do that?” pic.twitter.com/MStySfkV39

In the minutes that followed, Trump failed to explain the contradiction between his claims about being a voracious consumer of intelligence reports and that he was never informed about intelligence that Russia was offering bounties for US troops in Afghanistan that was reportedly in said briefs. “I read a lot. I comprehend extraordinarily well. Probably better than anybody you’ve interviewed in a long time,” the president claimed.

He also revealed total confusion about the difference between absentee and mail-in voting, struggled to explain why he recently extended his well-wishes to accused sex trafficker Ghislaine Maxwell (“Yeah, I wish her well. I’d wish you well, I’d wish a lot of people well. Good luck.”), and dismissed video footage of federal law enforcement officials using a baton to beat a Navy veteran who was protesting in Portland.

“I think that actually, antifa should be investigated, not the law enforcement,” Trump said.

But perhaps Trump’s most tone-deaf remarks were reserved for the end when Swan asked him a string of questions about racial inequalities and his reaction to the death of John Lewis.

Presented with a statistic that succinctly illustrates systemic racism in the country — “Why do you think Black men are two and half times more likely to be killed by police than white men?” Swan asked — Trump dodged with an equivalency.

“I do know this: that police have killed many white people also,” he said.

After Trump claimed he’s done “more for the Black community than anybody with the possible exception of Abraham Lincoln, whether you like it or not,” Swan asked him: “You believe you did more than Lyndon Johnson, who passed the Civil Rights Act?”

The interview closed with what should’ve been a softball — “How do you think history will remember John Lewis?” Swan asked. But instead of paying lip service to Lewis’s record as a Civil Rights icon, Trump denigrated him for the pettiest of reasons.

“Taking your relationship with him out of it, do you find his story impressive, what he’s done for this country?” Swan followed up.

“He was a person that devoted a lot of energy and a lot of heart to civil rights. But there were many others also,” Trump demurred.

The interview was recorded last Tuesday and aired Monday evening on Axios’s HBO show. In a sign of how it went, Trump — who regularly promotes softball interviews he does with the Hannitys of the world in the hope of getting as many people as possible to tune in — didn’t mention it on Twitter or elsewhere.

How to take a screenshot on any Kindle Fire