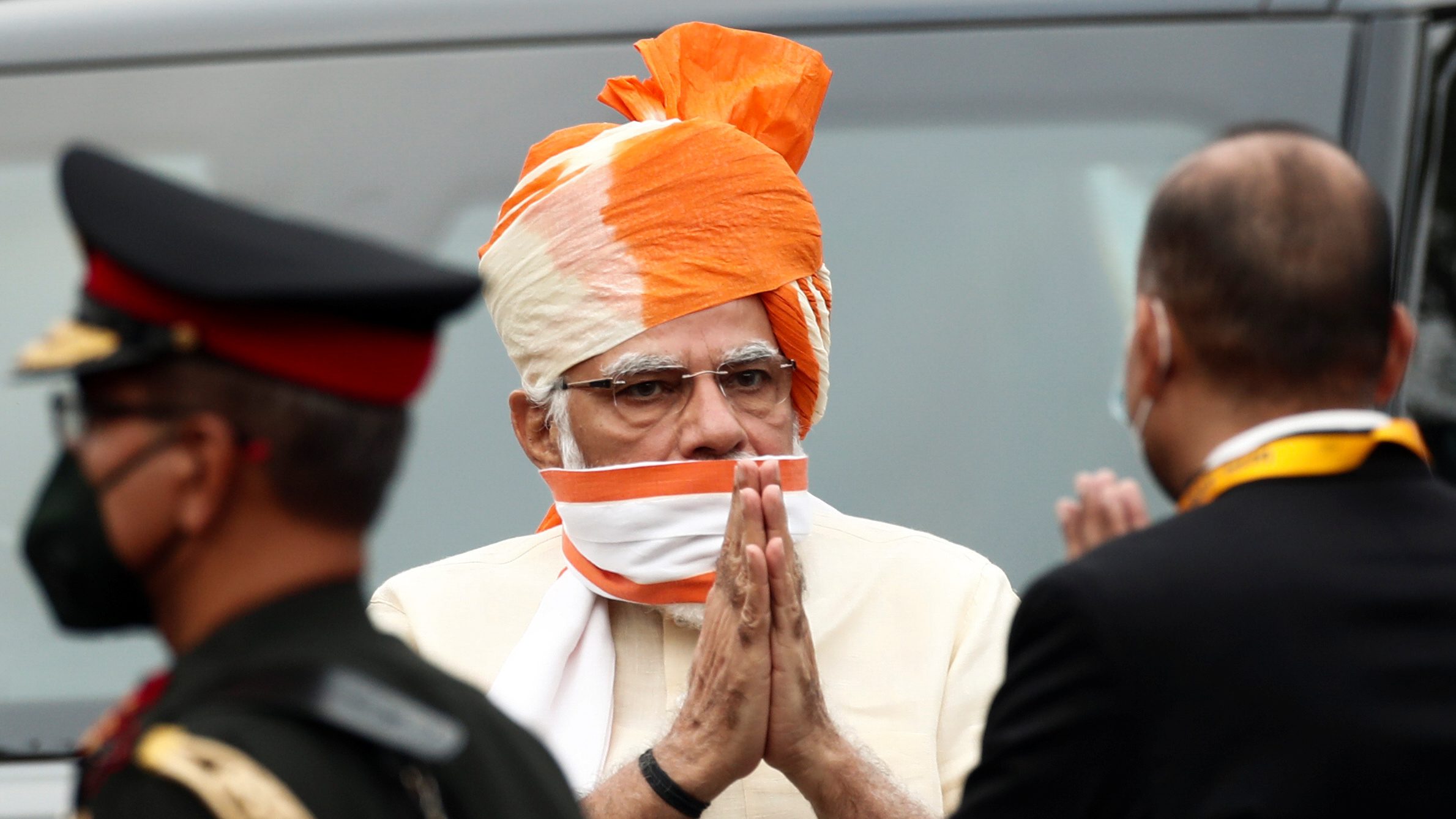 Uddipana Goswami, a 27-year-old Hyderabad-based corporate professional, is not quite holding her breath for a Covid-19 vaccine. “I trust our scientists and their work, but not politically driven statements,” said Goswami.

Goswami cited prime minister Narendra Modi’s address to opposition leaders at an all-party meeting in the first week of December where he said the vaccine would be available in India “within weeks.”

“Till the other day there was no vaccine, but suddenly after Britain, Mr Prime Minister announces that within weeks, a vaccine will come,” she said. “I am not a fool.”

Then, she pointed out “offensive statements” that the Bharatiya Janata Party, which is in power at the Centre, had made over the last couple of months. She was referring to the party promising free vaccines if voted to power during the Bihar Assembly and Hyderabad civil polls campaigns. “It is a shame that a humanitarian crisis has been turned into a political agenda,” she said.

Goswami’s apprehensions may have to do more with her politics, but her hesitancy to get inoculated against Covid-19 may be more common than one might imagine. In an online survey carried out by LocalCircles, a community social media platform, which received over 25,000 responses from 262 districts, nearly 60 % said they would not rush to take a vaccine even if it was available by February.

Considering the pandemic has completely upended people’s lives for almost a year—and vaccines are being projected as the only possible way to halt the virus’s charge—the results of the survey would perhaps appear to be somewhat counter-intuitive, notwithstanding the usual caveats of online surveys.

Vaccine hesitancy is complex and driven by several factors.

But experts warn against drawing simplistic connections. Vaccine hesitancy—loosely defined as the phenomenon of people refusing to get inoculated despite the presence of a safe and effective vaccine—is complex and driven by several factors.

Also, the idea of “safe and effective” itself could be sometimes contested as conversations around Covid-19 vaccines illustrate. Many have raised questions on whether a vaccine developed within months—vaccine trials usually stretch over several years—can be deemed safe even if governments and corporations say so. “There is no way to know for sure that a vaccine is completely safe or effective with such a short period of testing over such few people,” said Prabir Chatterjee, a doctor in rural Bengal.

Chatterjee, who has been part of India’s national polio surveillance project in various capacities, said: “I am not saying the Pfizer vaccine, which has been said to be safe and effective, is not good because I do not know. But anyone who tells you it has no problems is also lying. There is simply no way to know so soon—it will take a year at least.”

Sandhya Srinivasan, a Mumbai-based public health researcher and journalist, said to wait and watch, as a section of people seems to be doing, “might be a very rational approach” in the context of the Covid-19 vaccine. It made sense, she said, “to weigh the possible risks of a new vaccine against one’s own perceived risk of serious illness.”

But the seeming reluctance among Indians vis-à-vis the Covid-19 vaccine, researchers say, may extend beyond concerns about its science. In other words, there could be others like Goswami who may not doubt the science of the vaccines as much as the politics driving their availability.

Trust, after all, plays a key role in shaping public opinion towards vaccines, explained Vijayprasad Gopichandran, a community medicine physician from Chennai. India’s Covid-19 story so far, on the other hand, has been marred by episodes that did not inspire public confidence which, Gopichandran said, could have led to vaccine hesitancy.

He referred to the serious adverse event reported in one of the vaccine trials—which many alleged was mishandled and betrayed a lack of transparency on the part of the Indian authorities. Then, the BJP’s promise to deliver free vaccines in Bihar if voted to power could have led to “distrust in vaccination policy”, said Gopichandran. Then, of course, more, generally, “the health system’s handling of the pandemic” itself. “All these have contributed to the vaccine hesitancy,” said Gopichandran.

Chatterjee, too, spoke of a trust deficit that he believed the current dispensation suffered from. “Unfortunately, this government does not always tell the truth,” he said. “So even if it is pushing a good vaccine, there will be some lies. And since there is the social media and multiple news outlets these days, the lies will get caught, and depending on spin the news story is given, one or the other community will get provoked and refuse to get vaccinated. There is, after all, no dearth of groups or communities government has antagonised.”

“Let doctors do the talking”

Thus, it was absolutely imperative, Chatterjee said, that the vaccination approval process left no room for suspicion and experts communicated openly and clearly. That has not happened, so far, according to Chatterjee.

A lot of doctors are already pissed off with the government for various reasons. This is only going to make it worse.

He said, “Why is the prime minister pushing it? Let doctors do the talking. We know he doesn’t know about vaccines. (A) lot of doctors are already pissed off with the government for various reasons. This is only going to make it worse.”

Chatterjee, who has spent long years working in the government’s pulse polio and other routine immunisation programmes in east India drew on his own experiences. “When parents showed reluctance to let their children take the polio drops, I would often take it in front of them to convince them it was safe,” he said. “And it worked, I could do that because I was absolutely sure about its safety. Maybe it was not effective as it was projected to be, but it was 100% safe. But let me tell you I am not going to take the Covid vaccine anytime soon.”

If doctors were unconvinced about a vaccine, Chatterjee said, immunisation programmes were hard to implement. “In Burdwan, I remember it was the doctors who fought against the Japanese Encephalitis vaccine, they refused to give it,” he said. “So, we could not give it there.”

Historically, Indian policymakers have enthusiastic backers of the idea of vaccination as an idea. “Independent India ’s immunisation record”, the historian Niels Brimnes writes in his book The Politics of Vaccination: A Global History is “largely one of acceptance and implementation of the international agenda set by WHO” or the World Health Organisation.

According to Brimes, the “majority of Indians accepted immunisation”. Reluctance whenever it happened, Brimes writes, was often “due to indifference or vague fears about imperfectly understood practices” and “organised ideological or political opposition” was rare.

Yet, some of India’s most influential politicians had strong reservations about vaccination. There was, of course, Mohandas Gandhi, who was opposed to the idea of vaccination. Gandhi’s contention was that sanitation was a more useful and morally acceptable alternative.

C Rajagopalachari, whom Gandhi had once described as a “conscience keeper,” strongly opposed the BCG vaccine against tuberculosis. Rajagopalachari was not convinced about the safety of the vaccine—but there was more to his opposition. An ardent nationalist, Rajagopalachari believed that Indians were being used as research subjects for the sake of Western science.

Another well-known vaccine sceptic in modern India was Debabar Banerji, an academic. Banerji wasn’t anti-vaccination as such, but thought of it as a top-down quick fix that skirted India’s public health problems. He had a post-colonial critique too: he believed the West was “imposing” vaccination on developing countries as penance for its year of “plundering” as a colonial force without taking the pain to invest in making structural investment in health infrastructures.

Apart from these well-articulated strands of opposition, there have been many instances of vaccine hesitancy at the community level driven by a variety of factors such as media misinformation and political insecurities. Fears of impotency, seen most recently among Muslim communities in the states of Haryana, Tamil Nadu, Karnataka and Assam also been a major driver of hesitancy.

The politics of resistance

Researchers and doctors, however, say no one demography or geography is more prone to anti-vaccination tendencies. “I first encountered fears of impotency in relation to the polio vaccine among the Rajput community in 2000 in Banka district,” said Chatterjee. “And it was only after that it shifted to the Muslims.”

People had started to believe the health department was only for family planning.

Gopichandran said a lot of “well- educated pro-science rational people” have become aware and are raising questions” about vaccines. “The MR [measles-rubella] vaccine met with major hesitancy in well-educated pockets of Tamil Nadu and Kerala,” he said.

Regardless of the source of hesitancy it is important to address them, say experts. “People who raise reasonable doubts about vaccines are labelled anti-vaxxers which is a way of shutting down any criticism of specific vaccines and how they are administered, and funding agencies and government policies that include unnecessary, inappropriate or unsafe vaccines,” said Srinivasan.

For instance, Srinivasan pointed out, marginalised communities may resist because they feel that “health workers approach them only for contraception/sterilisation related programmes.”

Indeed, as several research studies have revealed, minority communities in Uttar Pradesh resisted the polio vaccination drive because they felt the state was insensitive to their other health needs. The sterilisation rumours only were only the immediate trigger. “Fears of sterilisation were real as for years, people had family planning shoved down their throats,” said Chatterjee. “That’s why those rumours of impotency because people had started to believe the health department was only for family planning.”

As sociologist Harish Naraindas who has studied vaccination in India put it: “Rumours may be an allegory, or a moral commentary if you wish, on both state and society.”

Besides, observers say that lack of robust redressal mechanisms to deal with possible vaccine-related adverse events could also drive hesitancy. “The state may not have legal provisions in place to address vaccine-related morbidity, including sick leave, job loss, etc., arising from its short or long term consequences,” pointed out Naraindas.

Then there was the often-overlooked matter of consent. In 2018, the Delhi government’s campaign to administer the measles-rubella vaccine to students at school ran into trouble after parents complained that their consent had not been sought. Thus, vaccine hesitancy, Srinivasan explained, had a lot to do with “how people are approached, and how information is shared, and consent is asked for and taken”.

Vaccine hesitancy, Chatterjee said, could be dealt with—but it required policymakers to be deft and gentle. “It’s all about taking time to understand who is hesitating, why they are hesitating so that you can strategise how to win them over,” he said.