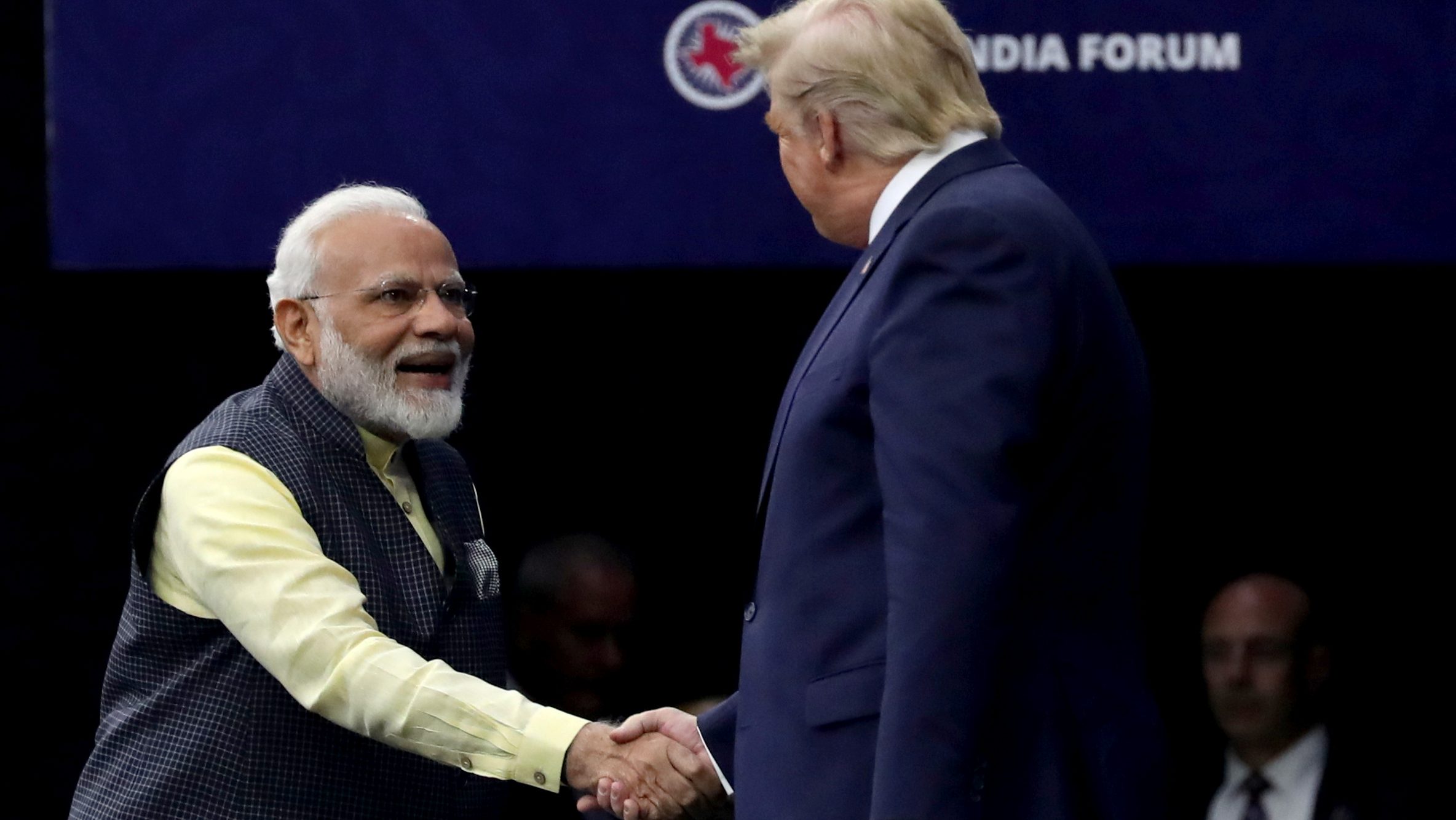 What do a stadium, a large stage, and a sizeable number of Gujaratis have in common?

Indian prime minister Narendra Modi and US president Donald Trump. On Feb. 24 and 25, Trump and first lady Melania Trump will visit India, travelling to Ahmedabad, in the western Indian state of Gujarat, and New Delhi.

Trump’s first official trip to India will be headlined by the “Kem Cho, Trump” event in Ahmedabad. Scheduled to be held at the newly inaugurated Motera stadium in the city, it is likely to be a Gujarati replica of the Howdy, Modi! in Texas in September 2019. “Kem cho” is a Gujarati translation of howdy.

The US president will be on Modi’s turf, specifically in Gujarat where the Indian prime minister served as chief minister for three terms between 2001 and 2014.

An estimated 125,000 people are expected to attend the inaugural event at Motera stadium, making Trump feel a tad unsettled. “He (Modi) said we will have millions and millions of people. My only problem is that last night we probably had 40 or 50,000 people… I’m not going to feel so good… There will be five to seven million people just from the airport to the new stadium (in Ahmedabad),” Trump said, according to DNA.

Once Trump tides over his discomfiture, Modi and he will have lots to dialogue and debate about. Trade ties between the two countries, common frenemy China, and India’s diplomatic skirmishes with Pakistan are all possible items on the agenda.

India, on its part, hopes that the Trump administration would reverse its hard stance on tariffs. The US administration has been vocal about its displeasure that India imposes heavy tariffs on American goods. It also wanted India to pay similarly high tariffs in the US for its goods, and restrict market access. Experts suggest that a comprehensive bi-lateral trade agreement could well be on the docket to iron these details out.

Another thorn in the India-US friendship bush is the US’s relationship with Pakistan. After India rendered Article 370 powerless, a law that gave the erstwhile state of Jammu & Kashmir special status, Pakistan has raised this issue at the UN Security Council multiple times.

Trump has offered to mediate the Kashmir issue between India and Pakistan a few times, but was met with a firm rebuff from India each time. The Modi government has maintained that Kashmir is an “internal” matter, but this could still be a conversation topic for the Modi-Trump meeting.

Trump’s visit also has the backdrop of his impeachment hearings, from which he has emerged unscathed. His approval ratings are soaring, just as the presidential race heats up.

An important constituency of Trump’s voters has been Hindu non-resident Indians, who made large donations and came out in strong support during the 2016 US presidential election. This time, too, the NRI vote is crucial, and of that pie, Gujaratis have a large share.

They are an influential, wealthy community in the US, and a visit to their homeland could go a long way in invoking nostalgia and loyalty.