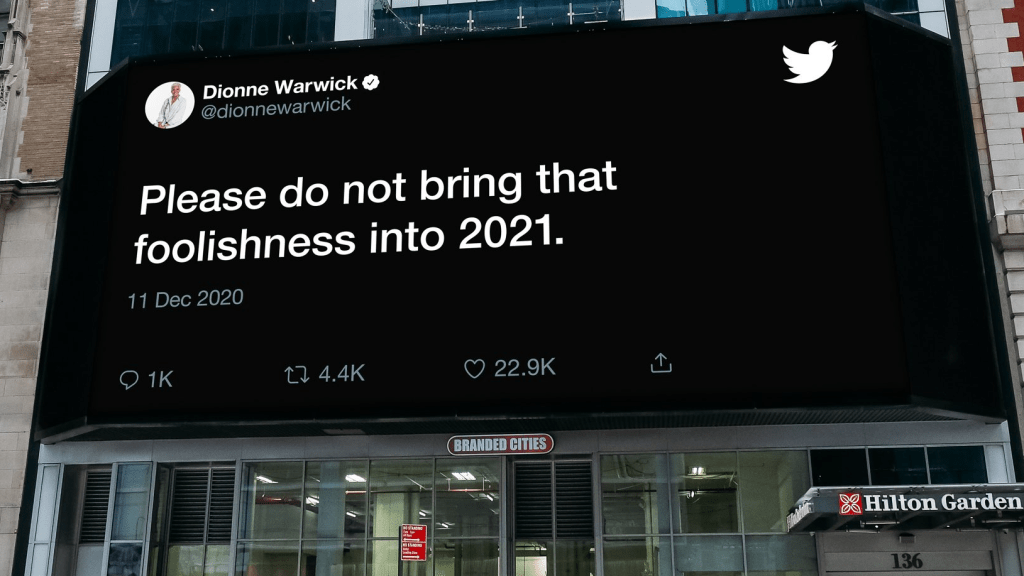 Dionne Warwick has become the viral Twitter phenom nobody knew they needed to close out 2020.

The iconic 80-year-old hitmaker joined Twitter in 2012, but only recently has become a bona fide Twitter star. From asking Chance the Rapper why he put “rapper” in his stage name and calling out The Weeknd to sending good wishes to Taylor Swift, her offbeat and hilarious tweets were the basis for a “Saturday Night Live” skit two weeks ago.

Now one of Warwick’s tweets has gotten its own billboard in New York City’s Bryant Park: “Please do not bring that foolishness into 2021,” the Dec. 11 tweet reads.

Warwick has even been dubbed the, well, honorary CEO of Twitter by actual chief exec Jack Dorsey. In response to a fan asking Warwick if she was the CEO of Twitter, the singer on Friday asked, “Am I, @jack?” To which Dorsey replied, within minutes, “Yes, you are.”

The billboard with Warwick’s tweet is one of several humorous and uplifting tweets from real people in Twitter’s end-of-year out-of-home campaign. In addition to New York, the social network has bought billboards and murals in Los Angeles, Philadelphia and San Francisco/Oakland — all to pitch the idea that Twitter was the place to keep it real. According to Twitter, users have posted more than 6 million tweets about 2020 to date.

Twitter’s main account tweeted the photo of the Warwick billboard on Monday, along with pics of the others in the campaign: