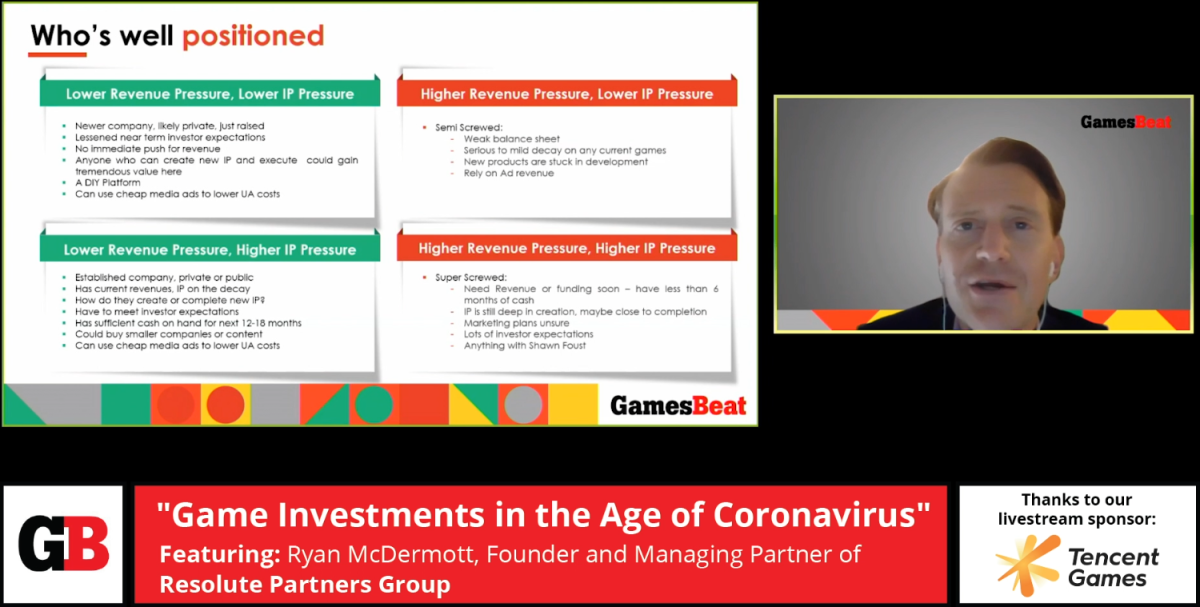 Game studios have been in a unique position since the beginning of the pandemic. Many other industries have faced huge hardship, with local governments ordering nonessential business to close in order to prevent the spread of COVID-19. The game industry, especially the owners of user-generated content platforms like Roblox and Minecraft, are in a good position to see growth.

“It’s hard not to see how DIY platforms do not see appreciable growth of neat, unexpected content,” said Resolute Partners Group (yep, that’s RPG, as that’s their favorite genre) founder and managing partner Ryan McDermott in a talk on the first day of GamesBeat Summit 2020. McDermott covered the macroeconomic impacts the pandemic has had on the world and how game studios are positioned amid growing economic turmoil.

McDermott cited several studies and statistics (including indexes from his firm) that detail why the video game industry is still seeing some growth during the pandemic, including Oxford Economics data that shows consumers spending more time and money on games due to stay-at-home orders.

“Everything has an expiration date. Prolong joblessness will lessen discretionary spending,” McDermott wrote in a slide and echoed several times during the talk. The Congressional Budget Office says that more than 26 million Americans have applied for unemployment over the last month. Officials say the unemployment rate will surge to 16 percent by September. The growth in the game industry won’t remain.

McDermott talked about how challenging it may be for studios to continue to produce new content with developers forced to stay home, among other factors, and that studios able to purchase new content should do so. We’re seeing an increase and game delays, meaning a “content desert” may be happening soon. New content is especially important to keep players invested, so companies with programs that encourage the player to create content, like Minecraft, Roblox and even game engines like Unity and Unreal, could “see more people tinkering with them than ever before,” he said.

He also looked at studios that will be hurt most by the pandemic, concluding that companies who were in trouble already will become worse off. “D companies are now F companies,” he said. Those whose business model relies on ad sales or studios who are in the middle of fundraising, may need to pivot to something else.

Epic Games, Robin Games, Nifty Games, and Proletariat are a handful of companies in a good position, according to McDermott. Robin Games raised $7 million in a seed round of funding in March while Nifty Games just finished raising $12 million this month in order to develop mobile sports games. Proletariat Inc. just is currently running a closed beta for its new fantasy battle royale Spellbreak. McDermott said they are in a great position to launch a new multiplayer title.

But no matter how perfectly seated a company may be, a prolonged shutdown or second wave of the virus will impact everyone heavily.