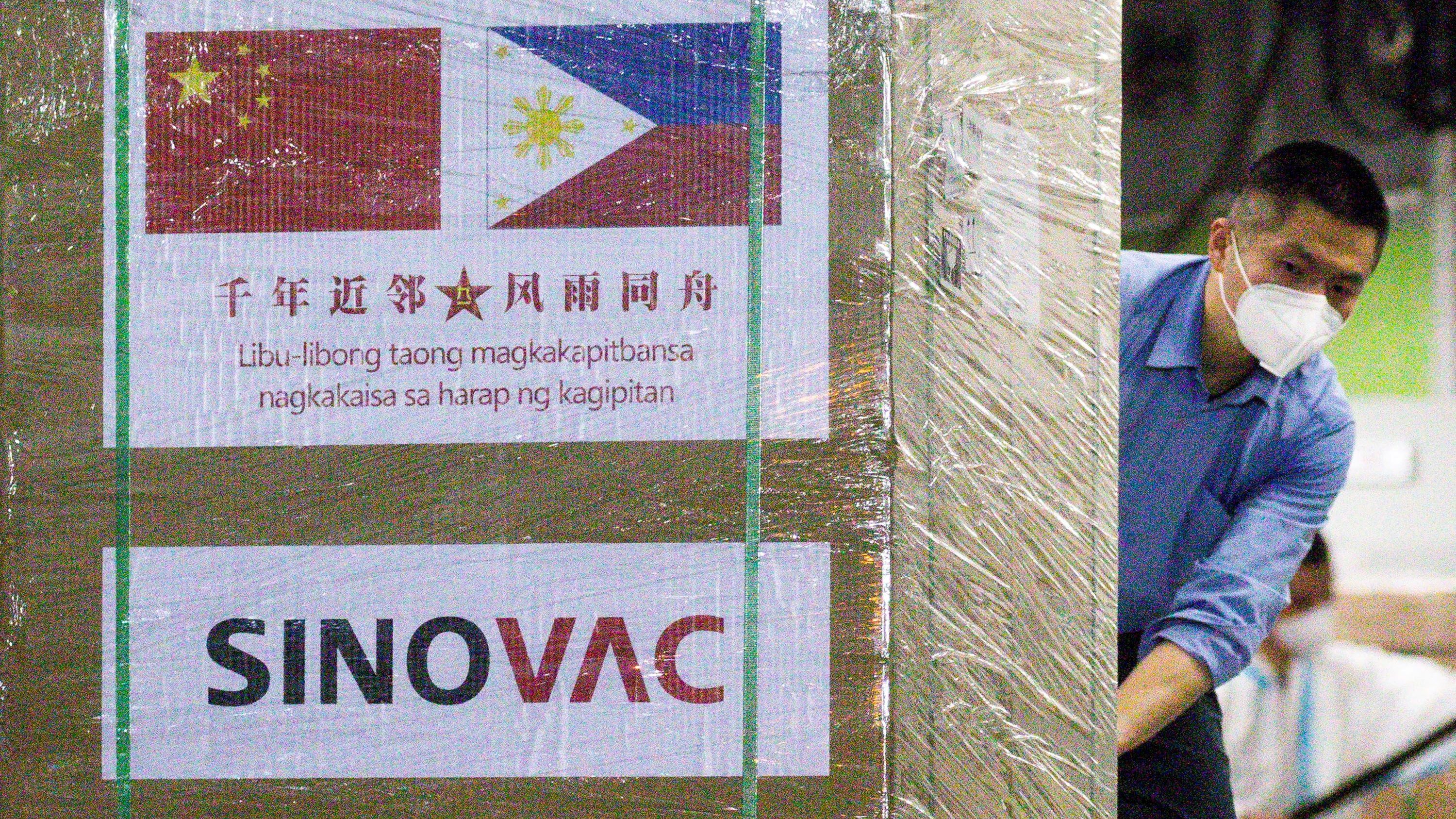 Paraguay is in a pickle.

The country of 7 million, which is experiencing its biggest coronavirus wave yet, is short on vaccines. It could get them from China, except that would sour the Latin America’s country’s relations with the US—and Taiwan.

Paraguay is one of the few countries that have official relations with Taiwan instead of China, which will not deal with any government that recognizes the island nation it has claims on. The US is urging Paraguay not to switch to the China column, but Paraguayan foreign minister Euclides Roberto Acevedo wants more than words of support. “We ask these strategic allies for proof of their love. Before holding hands, you have to at least take us to the movies,” he said on television. “President Xi Jinping has a lot of interest in a tie-up with us.”

If the US doesn’t rush to help, what is Paraguay to do? Hold on to old loyalty and lose lives, or go to the movies—well, the vaccine clinic—with a new friend? Such are the questions shaping international relations at the time of Covid-19, as countries deal with the hottest new diplomatic tool: Covid-19 vaccines.

Vaccines are arguably the most valuable export at the moment, and where producing countries send them often has more to do with geopolitics, than with medical need. This might result in a global vaccine distribution that reflects existing or budding allegiances, and delay the end of the pandemic.

What is vaccine diplomacy?

The idea of vaccine diplomacy is pretty simple: Countries that produce vaccines can set up bilateral supply agreements with countries that need vaccines, which become a tool of soft power, or outright diplomatic allegiance. While this hasn’t played out with vaccines at this scale before, the strategy is similar to the energy supply agreements that were sought internationally, including by the US, to face energy crises in the early 2000s.

Many countries have also engaged in what is known as “health diplomacy.” Cuba, for instance, has a history of providing medical aid to countries in need, dating back to the Cuban intervention in Angola in the mid-1970s. More recently, the country has offered medical and health support to Venezuela, and has sent trained personnel to deal with Ebola outbreaks. In this pandemic, Cuban doctors were deployed to Italy to help overwhelmed local healthcare workers.

In many ways, vaccine diplomacy mimics other diplomatic channels. There is a multilateral agreement, Covax, brokered by the World Health Organization and other international organizations, to provide vaccine doses to low- and middle-income countries. Then there are bilateral agreements between individual countries. Some are well established. For instance, China partnered with the United Arab Emirates (UAE) to produce up to 200 million doses of its state-backed Sinopharm vaccine to distribute to its population and across the region. The agreement provides China with strategic positioning, and the UAE with a speedy vaccination rollout—half of the UAE’s population has already been vaccinated, mostly with Chinese vaccines.

Other vaccine dealings are less straightforward. For example, Israel agreed to fund an undisclosed number of vaccines for Syria in exchange for a prisoner, according to reports.

Vaccine diplomacy is a touchy subject. While countries—much like pharmaceutical companies—would undoubtedly like to reap the soft power benefits of helping other nations end the pandemic, admitting as much defies the purpose.

This explains why, for instance, India isn’t talking about vaccine diplomacy, but “Vaccine Maitri” (vaccine friendship) to describe its program to donate 22 million doses of Covishield—the Indian version of the AstraZeneca vaccine—to developing countries. China went a step beyond, outright rejecting the “sinister” notion that it would exploit vaccine distribution to strengthen its global influence. “In advancing anti-epidemic cooperation, China has never pursued any geopolitical goals, has no economic calculations, and has never attached any political conditions,” reads a state-run press agency‘s report.

China may not be openly participating in the vaccine diplomacy race, but it is winning it anyway. The country—which has so far manufactured about 170 million doses, the most in the world—has donated vaccines to 53 nations, and exported them to 27. Russia follows, with bilateral agreements to donate and export its Sputnik vaccine to 37 countries. India, too, stands as a major player in Covid-19 vaccine diplomacy, although with a difference: Of the 76 countries the India-made vaccine has reached, the vast majority are part of the Covax program, so they are receiving the vaccine through international cooperation. Only a handful of countries in the region (Nepal, Afghanistan) are getting shots directly donated by India.

Wealthy western countries stand significantly behind, as they remain focused primarily on ensuring immunity to their own populations first. European countries are major money donors to Covax, but haven’t so far distinguished themselves in bilateral donations—quite the opposite. As EU countries struggle with procurement and vaccine rollouts at home, they’ve resorted to canceling exports. Italy, for example, blocked shipments of AstraZeneca doses to Australia.

Perhaps the main indication of China’s leadership in vaccine diplomacy is others’ attempts to catch up. Last month, the US, Japan, India, and Australia agreed to fund the production and delivery of vaccines in Asia—where the Chinese vaccine is already being delivered to 10 countries—despite the fact that other parts of the world might be in greater need.

Is vaccine diplomacy about politics, or economics?

There was always a political component to the race to the Covid-19 vaccine. Getting it right and early was always a point of national pride and power projection—think about the way the world might look at the EU now, which is trailing behind the UK, the US, and many other less wealthy countries in terms of vaccine penetration.

Russia was the first to explicitly frame the matter of vaccine production as a race—it isn’t a coincidence that it named its vaccine after the satellite that beat the US in the space race. When Sputnik was rolled out in Moscow, officials focused on how the country beat others to develop the vaccine, says Domenico Valenza, a researcher in cultural diplomacy at the United Nations University and Ghent University in Belgium.

The way other countries—especially in Europe—responded to Sputnik underscores the political framing. While some countries and organizations, such as the European Medical Agency, were open to using it, others outright rejected the possibility of establishing a relationship with Russia.

After all, the challenge isn’t just between different countries, but different political models, says Valenza. Russia, China, and even Cuba (which is making its own homegrown vaccine) all have a government model where the state is directly involved in vaccine manufacturing and distribution, as opposed to western countries where vaccines are produced by private companies.

But in some cases, the main driver behind the vaccine trade may be economic rather than political. China, for instance, is providing vaccines to many countries involved in its Belt Road Initiative, essentially protecting its investments. Meanwhile, the US is giving shots to neighboring Mexico and Canada—a move that could speed up travel and ease trade between the three countries—but not to Brazil, where the epidemic is out of control.

The potential downside of vaccinating the world

“There is this argument that mask diplomacy, and now vaccine diplomacy, is about China trying to rehabilitate its image on the world state given that it’s been tagged as the source for Covid-19,” says Tanisha Fazal, a professor of Political Science at the University of Minnesota.

It’s hard to say whether the approach works, or has any long-term positive effects, particularly if we look at what happened with the Chinese PPE. “There were some countries that were very grateful to receive PPE from China, but other countries were protesting the quality of that PPE,” says Fazal.

Considering that the Chinese vaccine has not been peer-reviewed and there is no publicly available data about its efficacy, it is possible that countries on the receiving end of China’s vaccine diplomacy efforts might feel shortchanged compared to those receiving vaccines developed elsewhere. In fact, the UAE recently introduced a third dose for certain categories because two didn’t provide enough coverage.