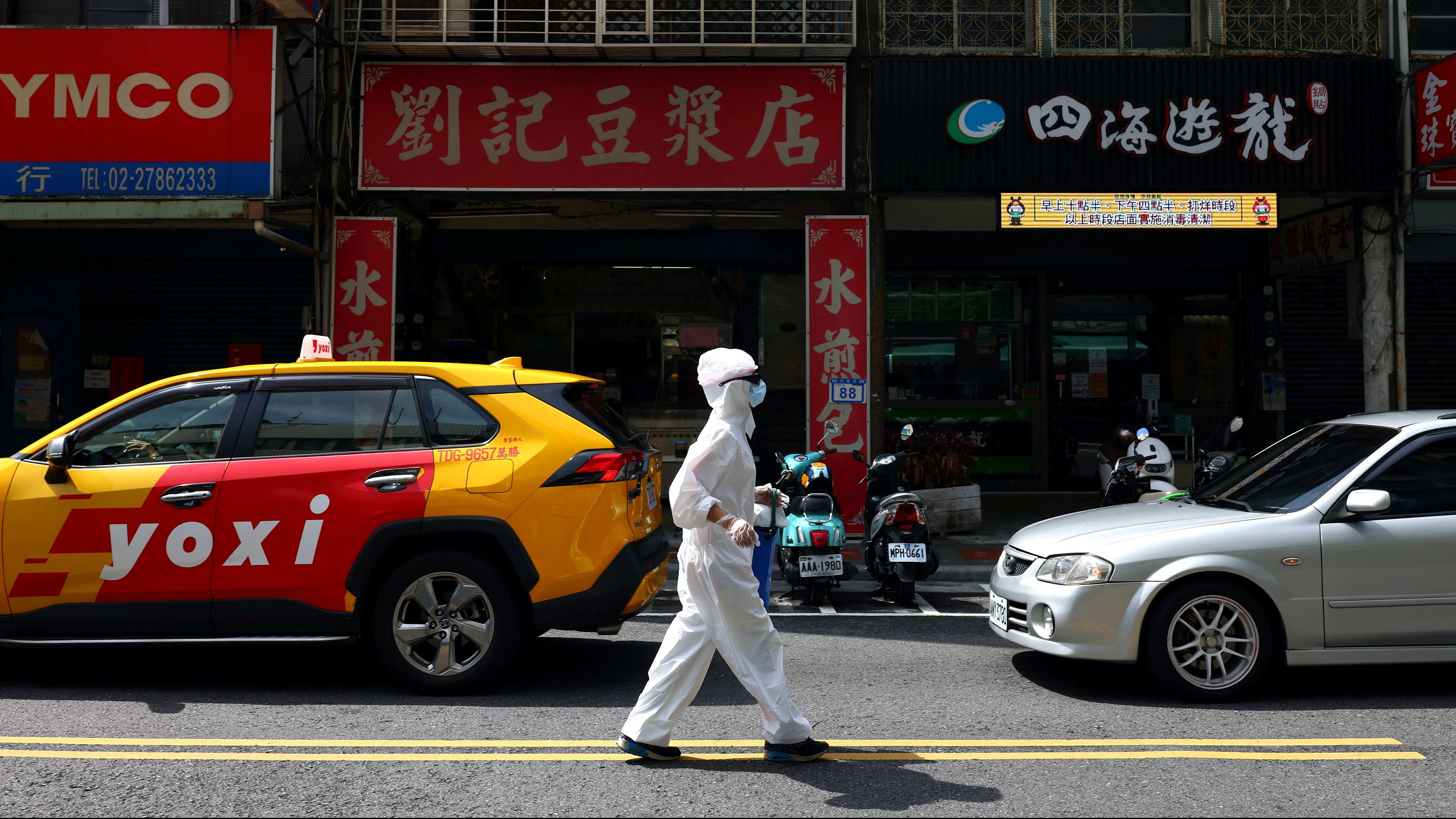 Ambulance sirens pierced the air. Businesses slammed their doors shut. High-speed trains hurtled past the city—banned from making stops inside the capital.

As a foreign correspondent in Taiwan, I watched in shock as Taipei battened down the hatches during a recent drill. After a year of virus-free bliss, long after the pandemic was first declared globally, I was suddenly in one of the world’s last places to head toward lockdown.

International news headlines had praised and paraded Taiwan as Best in Show—a rare oasis of normal life amidst a sea of stay-at-home orders and overwhelmed morgues around the globe. That’s because the island led the world in bolting its borders, implemented contact tracing, and mandated mass mask-wearing well before most places realized what a deadly virus they were dealing with. Up until this year, Taiwan had managed to successfully avoid the endless waves of strict restrictions seen in other countries.

As cases soared elsewhere in early 2020, numbers hardly budged here. From my rooftop in Zhongshan District, I could see Taipei’s glorious Grand Hotel, which lit up its rooms in April to spell out “zero” in large capital letters, victoriously declaring Taiwan free of local Covid-19 cases. That winning streak ultimately lasted eight months. As the stretch of no new infections held, people first celebrated, and then did the most human of things: got used to living life as normal, while the pandemic raged on everywhere else.

Taiwan was an island frozen in an Alice In Wonderland looking-glass moment. In parallel with the rest of the world’s tumult, I lived in strange tranquility in an alternative universe, where things were not as they should have been.

Restaurants remained open, packed with customers. Friends and families gathered without fear. Concerts and competitions continued without a hitch. In December, I ran the Taipei Marathon, one of the world’s few large-scale races to take place in person last year. I huffed and puffed alongside 28,000 other runners, sans mask. Our droplets flew without abandon.

The Covid-19 outbreak in Taiwan

Recently, a cluster of infections broke out of a hotel housing quarantined pilots and started spreading throughout Taiwan’s largest cities. In under two months, Taiwan went from less than 100 community-spread Covid-19 cases to more than 11,000 (as of Friday). The government quickly imposed a Level 3 alert (out of 4), meaning all businesses and public spaces had to close, and gatherings were sharply restricted.

Outside my window, I watched cadres of military soldiers stand at attention, deployed to go into a different kind of battle: disinfecting my neighborhood, a burgeoning Covid-19 hotspot. Long lines snaked around pop-up testing centers and a deafening silence filled the city streets, which were buzzing with bustling crowds only weeks ago.

“We have to prepare for the worst and hope for the best,” Taipei city mayor Ko Wen-je announced to all residents.

A roadmap for the pandemic

By that point, I had seen the pandemic unfold all around the globe, though always as a spectator.

For the better part of a year, I had watched identical dress rehearsals of lockdowns across different countries, again and again. (Taiwan, in fact, had literal rehearsals.) The cast changed and the staging varied, but the plot remained perpetually the same. I could predict how this outbreak would play out too.

Less than an hour after new pandemic restrictions were announced, panic buying ensued and grocery shelves became barren, just like everywhere else in the world. New “pandemic preparedness” displays sprouted up in storefronts, selling instant ramen and hand sanitizer. Meanwhile, toilet paper purchases were limited to one per household.

I called my friends and family back home in America, asking for their advice. I figured they’d been through it all already and could offer words of comfort or consolation.

“This is when you’re going to hit your sourdough bread-making phase and then you’re going to pot a whole bunch of plants.” That was the advice distilled from a group of close college friends the day after pandemic restrictions were announced. They gave me a detailed timeline of the rollercoaster of emotions I was about to embark on. “And later, you’ll go into a full mental breakdown,” said one of them.

In some ways, knowing what was up ahead made preparing for a lockdown even more agonizing. It wasn’t the uncertainty but, rather, the certainty that gnawed away at the frayed seams of my sanity. From afar, I had watched helplessly as my friends and family back home suffered when their lives screeched to a halt. I hadn’t really understood their pain. It was only then, in the throes of my first lockdown, that I could finally fully empathize. I couldn’t do much for them then. They can’t do much for me now.

My friends in Taiwan began fumbling with Zoom for the first time. My inbox was suddenly flooded with invites for awkward virtual workouts, dinners, happy hours, game nights, and book clubs. But when I logged onto an online birthday party, a power outage struck and ended the celebration early. The island’s grid was becoming overwhelmed with the sudden influx of people now forced to stay at home.

Meanwhile, Taiwan’s vaccine hesitancy, founded on a sense that Covid-19 was a distant possibility, suddenly vanished. As people scrambled to get their hands on the small, shrinking supply of vaccines, my long-held appointment to get my own AstraZeneca dose was canceled without notice. I didn’t even make it inside the hospital doors before I was told the bad news and turned away.

“There’s not enough vaccines for frontline workers anymore,” a young attending physician told me, from six feet away. The woman next to me, facing the same situation, began to sob. On a policy level, I understood. But on a personal level, I too was devastated.

Relocating from Taiwan to the US

The pandemic, for so many, was a time of paralysis and pondering. As Taiwan’s outbreak unfolded, I too started to question everything about my life.

The pull to come home to the US started as an inkling, and then, a flood that I could no longer ignore. Being outside of my home country during the pandemic had taken a toll on me, both physically and mentally. When my grandma caught Covid-19, I cried for weeks. When my dad blamed my little sister for bringing the virus into the house and kicked her out, I went numb for months.

My friends back home had lived vicariously through me last year, requesting snapshots of my “daily, normal life” in which I worked in crowded cafes and took trips to the beaches and mountains of Taiwan. But this year, during my own lockdown, I watched longingly as summer barbecues started to pop up all around America and envied all their joyful, long-awaited family reunions from afar.

I knew the pandemic was still far from over, but the desire to carve out a new future at home after four years of living abroad continued to tug at me. I realized that I’d already gotten all the signs that this particular place and chapter in my life was ending. I was ready to write the next one.

So I booked a one-way ticket back.

On my last day in Taipei, a typhoon came raining down. I waded in waist-deep waters around the city, trying to tie up any loose ends. I packed up my entire life into two dusty suitcases that hadn’t been touched in 16 months. I regrettably bid farewell to friends over Zoom, since we weren’t permitted to gather in person. Many were in denial that I was departing at all and didn’t say goodbye back.

My eleven-hour flight was eerily quiet. I slept amongst rows of empty seats and tried to picture the new, strange America that I was about to enter. I thought back to being on my apartment rooftop for the last time during my final week, when I caught a glimmer of the Grand Hotel in the distance. Long gone were its days of celebrating zero cases. The hotel’s lights solemnly spelled out 平安, the Chinese characters for peace and safety. I hoped that Taiwan would feel a sense of peace soon.

Upon arrival in America, an immigration officer greeted me. “Welcome back home,” he smiled. As I exited San Francisco’s airport, my newly vaccinated friend hugged me tightly, to my surprise. Although I had just stepped off of a cross-oceanic flight, she was more of a risk to me than I was to her now. She held her mask in her hands. Things were changing fast.

With the arrival of summer and the loosening of pandemic restrictions, America was starting to hum back to life again. It’s been a long and lonely year, for all of us. I looked up at the California sunshine—not a cloud in the sky. At last, I felt a sense of peace.