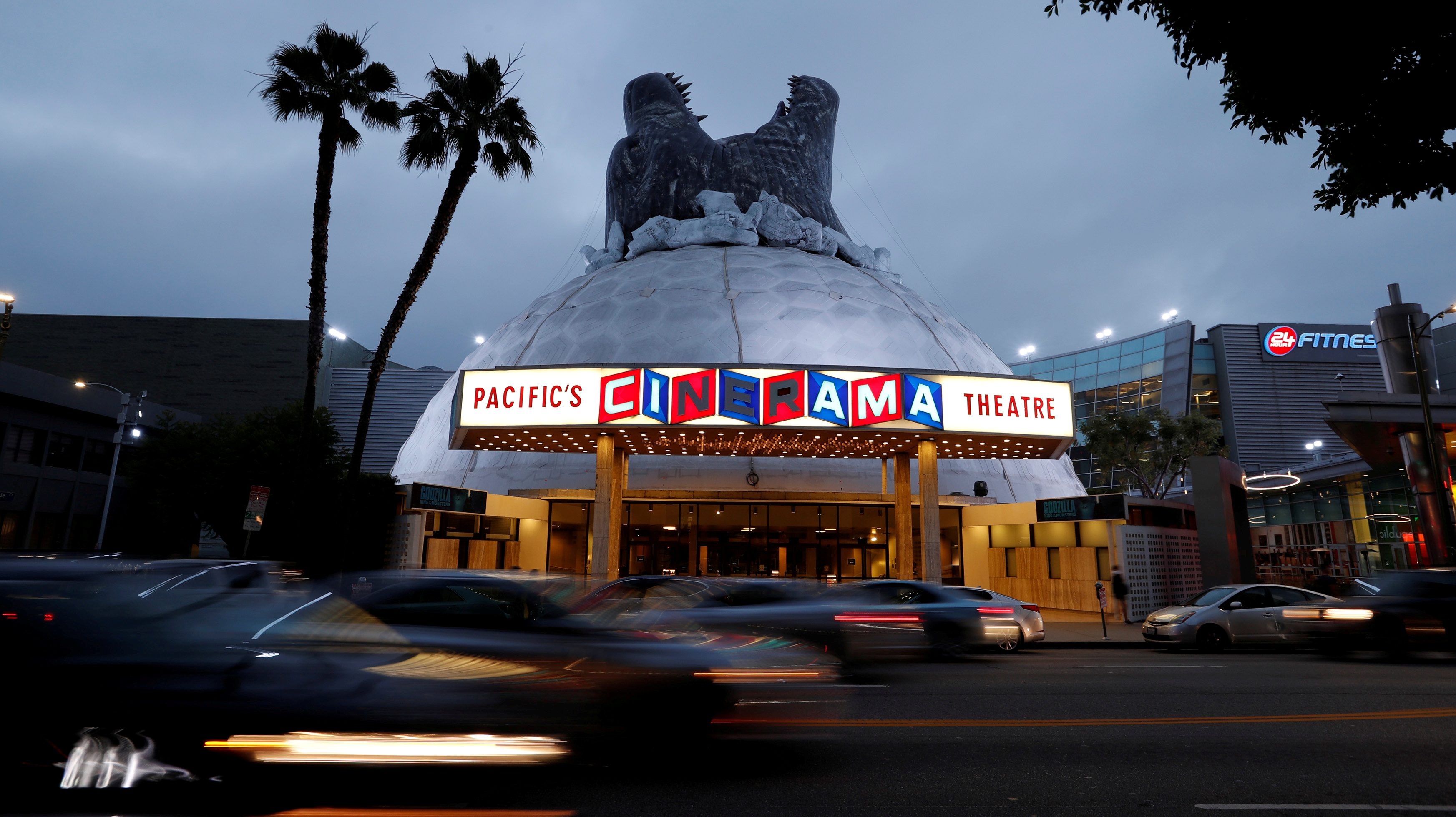 ﻿﻿The most beloved movie theaters in Los Angeles are closing. Now cinephiles in the movie-obsessed city are shining a Bat-Signal into the sky, hoping a deep-pocketed company (or individual) will swoop in and rescue them. The question is: Who will answer the call?

ArcLight Cinemas and Pacific Theatres are permanently shuttering all 16 of their southern California locations, the theater chains announced in a statement yesterday, citing financial hardship brought about by the Covid-19 pandemic. “This was not the outcome anyone wanted, but despite a huge effort that exhausted all potential options, the company does not have a viable way forward,” the statement said. Both chains, which are owned by the Los Angeles-based real estate development company Decurion, had been closed since March 2020.

Film fans—including several prominent filmmakers and actors—are devastated. ArcLight’s theaters were some of the most well-liked moviegoing destinations in the US, and were commonly used to host major Hollywood premieres. Patrons enjoyed their commitment to a high-touch cinematic experience: Ushers would come into theaters and personally introduce each film, for instance. Pacific’s Cinerama theater, best known for its iconic geodesic dome, was among the most famous cinemas in the world, with cameos in everything from HBO’s Entourage to Quentin Tarantino’s 2019 film Once Upon a Time in Hollywood.

Almost immediately, observers on social media began asking who might be able to save the theaters. Prior to the pandemic, they were successful, generating a combined $114 million in ticket sales in 2019 (and likely much more after concessions are included), IndieWire reported. Anyone who steps in would not only earn the goodwill of Hollywood, but might also be acquiring a solid business as the US economy recovers from the pandemic.

And owning some or all of these theaters could fit into the business strategies of some big-name entertainment and tech companies. Here is who might be interested, and why:

The world’s biggest streaming service already leases and operates the Paris theater in New York, where it hosts movie premieres and other events. Netflix added to its small roster of theaters when it bought the Grauman’s Egyptian Theatre in Los Angeles last year for similar reasons. Owning the Egyptian also helps the company’s films qualify for awards like the Oscars, which require that films play in a Los Angeles theater for at least a week.

On top of that, Netflix’s new Hollywood campus is right around the block from the Cinerama Dome and ArcLight Hollywood:

So ponying up for the Dome seems like a natural fit for Netflix’s goals. It would curry favor with the Hollywood elite and give the company another location with which to promote its growing investment in film. While Netflix may be interested in acquiring a single iconic property, it’s unlikely to buy a chain of commercial theaters like ArcLight as that’d venture too far from its streaming-first mission.

The e-commerce giant, which produces many films and TV series of its own, could buy the Dome as an answer to Netflix’s Egyptian acquisition—but it might actually be interested in more than that. Amazon has long been rumored to be a potential buyer of AMC Entertainment, the world’s biggest theater chain, which has also struggled to stay afloat during the pandemic.

Money would not be an issue. And Amazon could use the ArcLight theaters to integrate its other services, like IMDb, Whole Foods, or Twitch. Imagine an ArcLight location with live Twitch streams broadcast on screens, or IMDb kiosks that enable moviegoers to research films before or after they see them. Amazon could bundle ticket prices into their Prime memberships. Some film purists might recoil at the corporate synergy, but there’s a reason for the rampant speculation about Amazon’s interest in the theater business.

Apple really wants the world to know it is investing in movies. It’s paying $200 million to finance Martin Scorsese’s next movie, Killers of the Flower Moon. It paid $100 million just for the rights to an upcoming slavery thriller starring Will Smith. It signed a deal with Leonardo DiCaprio’s production company. And it was reportedly interested in purchasing MGM’s movie library, which includes James Bond.

What better way to signal it’s serious about movie-making than buying the most popular theaters in the most lucrative movie market in the world? They could sell iPhones and Apple Watches next to the popcorn. The theaters could serve as glorified billboards for its Apple TV+ streaming service. Like with Amazon, money wouldn’t be an issue, but it may not fit into the company’s vision for entertainment. It’s investing in movies to make Apple TV+ a better offering—and it’s focusing on Apple TV+ in order to sell more devices.

Disney (or another studio)

The Paramount Decree—a landmark 1948 US Supreme Court antitrust case—barred Hollywood studios from owning their own movie theaters chains. But that law was struck down last year by the US justice department, which argued that technological innovations (namely the advent of streaming) have changed the competitive landscape.

That’s opened the door for a studio like Disney to operate its own group of movie theaters. It could control every aspect of the movie experience without having to split profits with another company. The Mouse House could turn each of its theaters into a Disney entertainment complex—Disneyland, but indoors, and without the rides.

Disney already owns the El Capitan Theatre in Hollywood, where it hosts premieres and screens only its own films. It was technically not subject to the Paramount Decree, since it didn’t own any theaters at the time it was adopted. But now that the law is terminated, the company could feel licensed to expand beyond a single theater.

There would likely be regulatory scrutiny. And Disney might not want the potential headache of reviving a failed business on top of its other pandemic-induced challenges. But if it is looking into controlling more methods of film distribution, it could use the LA theaters as a test run to see if it’s able to enact such a strategy on a wider scale.

AMC, which has fought off bankruptcy throughout the pandemic, might not be in a position right now to save other struggling companies. It still needs some help of its own—though recent positive results at the global box office suggest it might just weather this storm.

Still, assuming the theater chain does survive the pandemic, it may look to strengthen its position by expansion. Adam Aron, AMC’s CEO, told shareholders last month that it wants to issue 500 million new shares in part to fund future acquisitions. Once it buys back some of its debt and pays its overdue rent, it would use any leftover cash to swallow up smaller competitors. The ArcLight and Pacific theaters could be an enticing target.

A consortium of filmmakers and actors

Several rich filmmakers, including Quentin Tarantino and Rian Johnson, are on the record as fans of these theaters. They could pool their money and takeover the locations themselves, turning them into a cinephile’s paradise. Or they could offer to just lend Decurion the money it needs to continue operations for awhile without getting directly involved. Either way, the opportunity to be Hollywood’s savior is there for anyone with enough money.

No one will need to

Deadline is reporting that shuttering the theaters is part of a lease negotiation tactic by Decurion. The landlords could ultimately elect to hand the keys to the buildings back over to the theater chains at a cheaper price. If that happens, they may not need help from any other parties. But it’s unclear if that will happen—and if so, how long it would take. In the interim, the theaters would likely stay closed.

Companies like Decurion do have some leverage in these situations. Most movie theaters—especially elaborate ones like the Cinerama Dome—are designed specifically to be movie theaters. It’s not easy to turn them into anything else. If there’s hope for Hollywood, it’s that it’s much more likely than not that these locations will screen movies again. But which brand name is on the marquee remains to be seen.