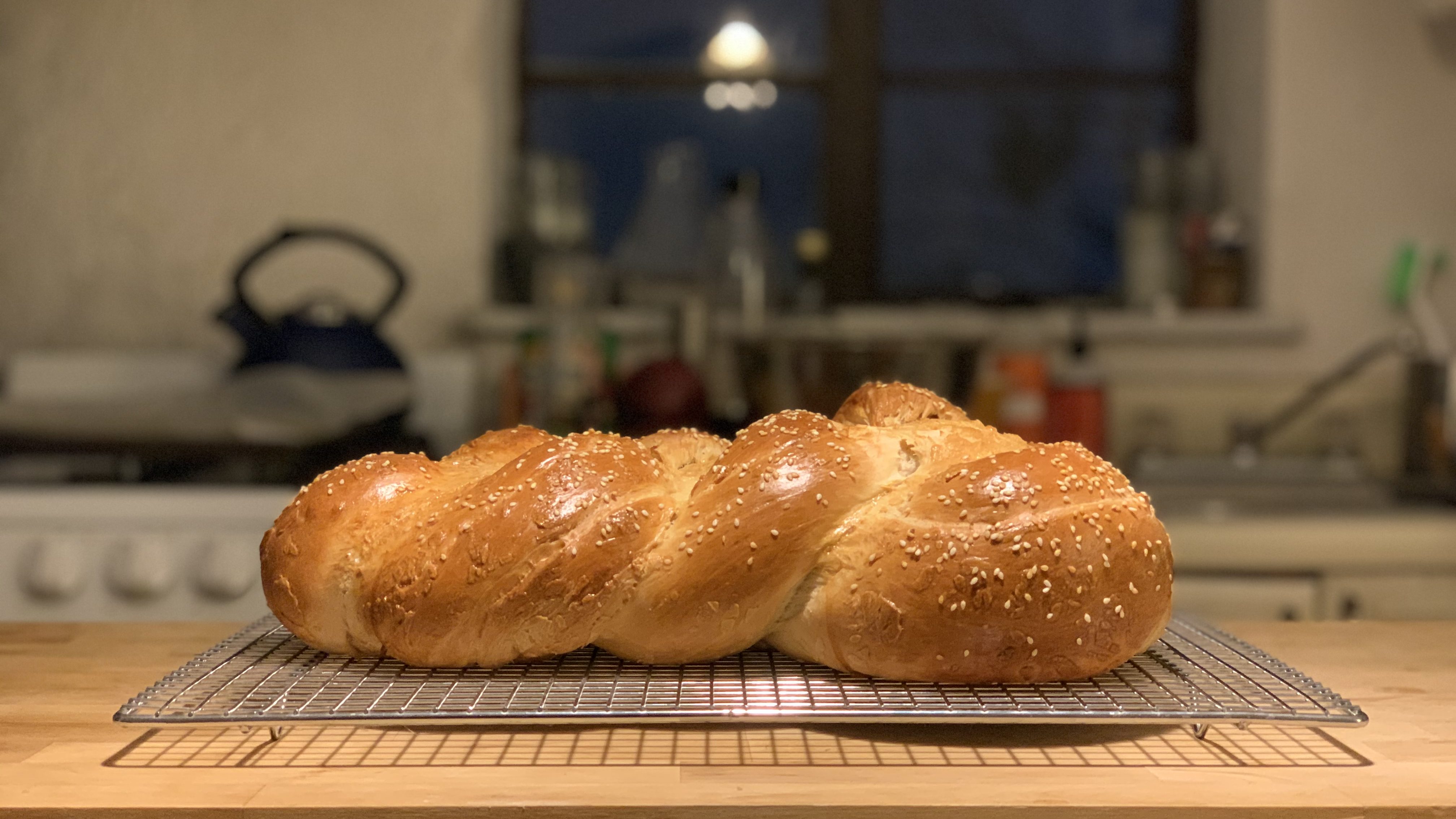 It started with a persistent sore throat, hacking cough, and slight fever.

This was two weeks ago, and news about the spread of coronavirus was everywhere. Uneasy, I went to a local urgent care center, where my tests came back negative for the flu and strep throat. A doctor deduced I had bronchitis and sent me away with a prescription for antibiotics.

“Stay inside and take this for the next five days,” he told me. “If you don’t start feeling better by the third, give our office a call.”

Back at home, I set aside my anxiety and pulled out a mixing bowl, eggs, flour, sugar, and oil.

If there exists any silver lining to being shut away and unwell—whether due to a common ailment or Covid-19—one can certainly be found in a home kitchen. And as more employees are asked to work remotely to decrease the risk of spreading the coronavirus, it’s a room where they might be spending a lot more time.

To seek that silver lining, you can explore the pages of certain cookbooks—think Adeena Sussman’s home kitchen-forward “Sababa.” Or the viral video recipes on YouTube featuring Alison Roman and her now-famous chickpea stew. Maybe you’ll find it in charts showing the rise in popularity of shelf-stable beans, the kinds that are perfect for creamy hummuses and stews. Or maybe in the scientific evidence that shows home-cooked meals are, in general, more healthful than the processed foods people often consume outside their homes.

For me, that spark of culinary creativity arrived through social media, a stunning loaf of challah, and a long-distance show of kindness.

Food is more than sustenance

I pressed send, and my message was dispatched halfway around the globe, an instantaneous fiber optic ride from New York City to Berlin.

“Hi! Question: Do you make your challah by hand usually, or do you use a stand mixer in most cases?”

At that point, I’d been feeling ill for the first of two weeks. I was antsy, I missed my friends, I was tired of laying in bed. Still, when I scrolled by one of Idan Chabasov’s photos on Instagram, it struck a nerve.

My phone lit up.

“Thank you for the message,” Chabasov responded from his account, @ChallahPrince. “Since I have the mixer I do it only with that, but sometimes if I want to make it at night…and I don’t want it to interrupt the neighbors, I’ll do it by hand.”

There’s something about how challah dough comes together that’s pleasing to the senses. If you don’t have a stand mixer, transforming it from a sticky-wet mess into a smooth, tactile mass can be a laborious endeavor. You twist, press, and apply pressure that can be felt deep in the shoulders and triceps. The focus is intense. The movement is methodical and lulling—introspective, even.

I paused my work to continue conversation with Chabasov. Talk of dough turned into talk about life—the possibility of discovering yourself in new ways, and the joy of reconsidering your place in the structured stresses of the world.

There’s a lot to be stressed about right now. The Italian government this week announced a ban on public gatherings. In Israel, the government said all people on incoming flights would need to be self-quarantined for two weeks. In the US, the government strained to provide local health departments with testing kits. The advice dispatched by public health organizations has been straightforward: Wash your hands, don’t touch your face, and keep your distance from others.

For many, cooking at home is intimidating—and nobody wants a recipe to go wrong when they’re already managing the stress of the world beyond their front doors. But instead of being an added source of stress, in a time of self-imposed isolation, cooking can be an act of self-care.

Cooking is about improvisational flourish when applying heat and acid. It’s kinetic and sometimes unwieldy. Sometimes you flirt with disaster. Sometimes you walk away to let something simmer for 45 minutes. Sometimes an egg tumbles to the floor and the whole world ends for five whole seconds. But cooking is about being okay with making a mess. And it’s a cultural manifestation of culinary gift-giving, even—and maybe especially—if it’s a gift simply to yourself.

There are countless ways to embrace self-expression in the kitchen. The aromatics of a colorful curry. The bubbling richness of a bean stew. Or maybe you just want an oatmeal raisin cookie the size of your head. The home kitchen gives permission to escape, to write your own rules.

The end of a trend

In the last month, people have started showcasing their at-home kitchen forays using hashtags such as #QuarantineKitchen and #CoronaVirusKitchen. The New Yorker featured two YouTube cooks who’ve made the most of their kitchen while quarantined in China. It’s an optimistic framing—and it goes against a recent historical trend of people spending less time in their kitchens.

Between 1965 and 1992, Americans shifted toward eating out more and cooking less, in part because more women were entering the workforce. But a 2018 study published in Nutrition Journal, found that trend appears to have reversed.

Between 2003 and 2016, at-home cooking among men and women generally increased. “Men are increasing their contributions in the kitchen,” says Lindsey Taillie, a University of North Carolina nutrition researcher who contributed to both studies. “We don’t really know why that is the case. We speculated that it could be from increased media around cooking.”

There’s a lot to play with in self-quarantined kitchens. For many people, home kitchens stocked with shelf-stable pantry staples have a lot at their fingertips for creative cooking. Onions, potatoes, beans, flour, eggs, frozen fruits and vegetables, and oats offer a launch point for making meals worth repeating.

But I stick to baking. After waiting three hours for my dough to rise, I roll it out into three long strands and begin to braid them into a single loaf. Dough is especially pliable but still I handle this task with care, lifting a strand delicately before roping it above and under its neighboring stands.

“To create something with your hands is definitely satisfying,” Chabasov tells me. And he’s right. The loaf glistens as I finish brushing it with egg wash before sliding it into a pre-heated oven. The rest is left to patience.