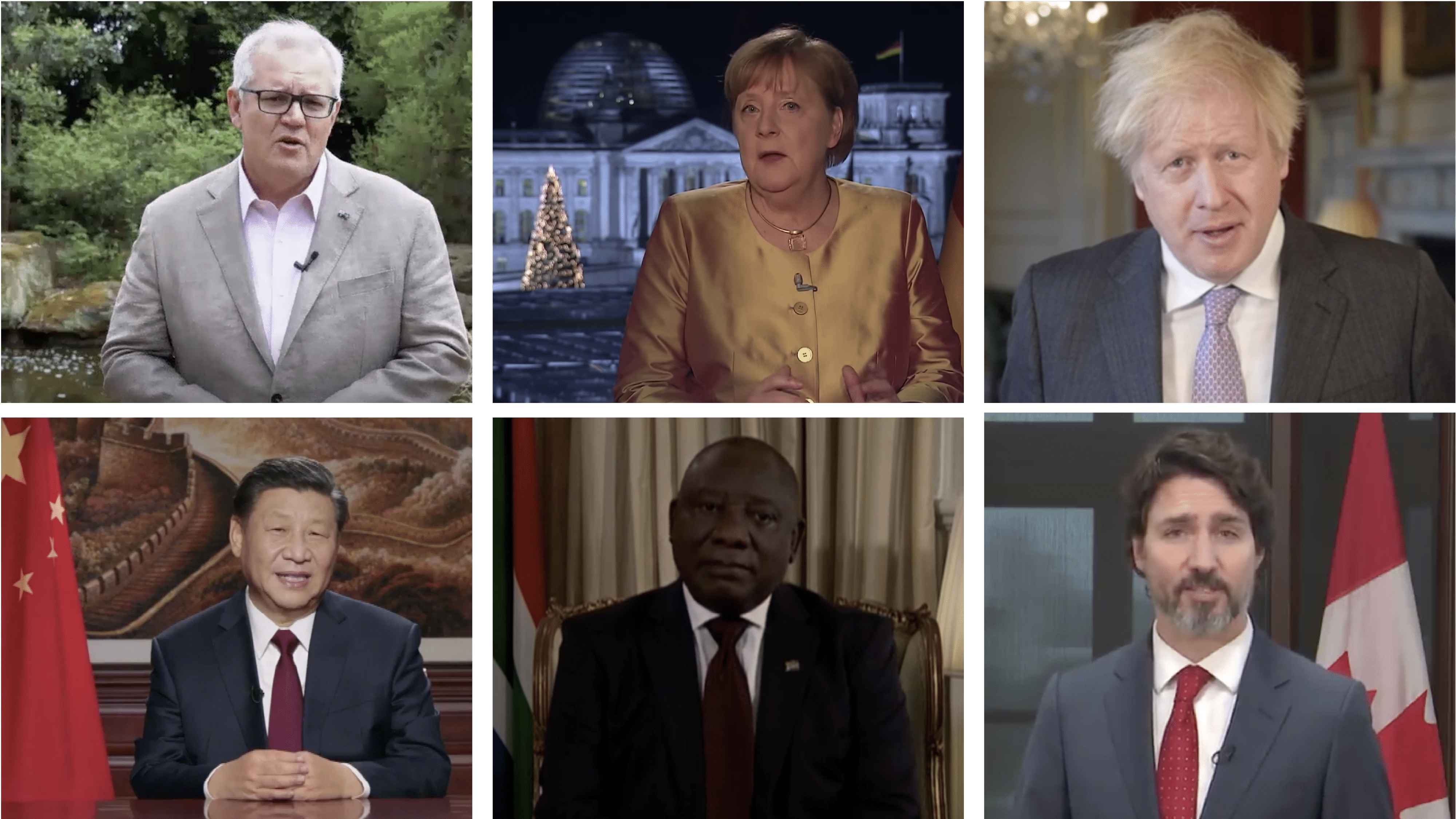 Global leaders took to social media and the airwaves on New Year’s Eve to wish their citizens a brighter future. Many acknowledged the sacrifices people made in 2020, and thanked the public for pulling together through an historically difficult year. To date, more than 1.8 million people have died in the Covid-19 pandemic.

In keeping with expectations, US president Donald Trump also found an opportunity to mention with amazement all the people calling to thank him for the success of Operation Warp Speed, a public-private project to accelerate the development and delivery of Covid-19 vaccines, though so far the delivery phase of the effort has been slower than expected.

At the doorstep of a new year, here are some highlights from several hope-filled addresses.

“In 2021, we must stay vigilant as we continue our comeback. A comeback that is well underway despite the present challenges we face. A safe and effective vaccine .. .will be available to all Australians and will be a key step in our recovery in 2021. Our economic recovery plan will continue to get even more Australians back into work and restore their livelihoods, driven by a business-led recovery.”

“Only in hard times can courage and perseverance be manifested. Only after polishing can a piece of jade be finer,” he said.

“We still need to stay tenacious like a bamboo deeply rooted in the rocks, keep our feet on the ground, and work hard to paint a magnificent picture of rural vitalization, and steadily march ahead towards the goal of common prosperity.”

“We can now see light at the end of the tunnel. But it will still take some time for enough people to be vaccinated before we are safe from another major uncontrolled outbreak,” warned Lee. “Now is not yet the time to celebrate. That time will come.”

Putin, in apparently his longest New Year’s address yet, thanked the country’s doctors, nurses, and frontline medical staff, and spoke of the year’s tough challenges. At the end of the speech, he said:

“Let us dream in these moments of the most sacred and bright peace and wellbeing, happiness and joy for all those near us, all those we hold dear, for all of our country. I want to say thank you to each of you because we are together. And when we feel the reliable support of those standing beside us, Russia becomes one big family.”

Nicola Sturgeon, Scotland’s first minister, said that 2021 would be Scotland’s “year of recovery.” She remarked: “Even as we reflect on this darkest of years, we can see light ahead.”

Cyril Ramaphosa, president of South Africa, spoke about the realities of the second wave now gripping his country:

“The year ahead will be challenging and difficult. We are in the midst of a second wave of coronavirus infections, which may even be much worse than the first wave. And while we are greatly encouraged by the progress made in developing an effective vaccine, we know that it will be some time before the pandemic ends. The year ahead will therefore require our greatest effort, as well as resilience.”

After leading Germany for 13 years, Angela Merkel intends to step down as chancellor in 2021, at the end of the current legislative period. She offered some measured hope, using part of her address to console the grieving and to call out Covid-19 deniers:

“I don’t think I am exaggerating when I say that never in the last 15 years have all of us found the old year so difficult—and never have we looked forward to the new year with so much hope, despite all our worries and some skepticism.”

“We as a society must not forget how many people have lost a loved one without being able to be close to them in their final hours,” Merkel said, adding that she “can only imagine how bitter it must feel” for survivors who are mourning or fighting Covid-19’s aftereffects “when the virus is contested and denied by a few incorrigible people.”

“Conspiracy theories are not just untrue and dangerous—they are also cynical and cruel toward these people.”

President Emmanuel Macron warned: “The first few months of the year will be difficult, and the epidemic will continue to weigh a lot on the life of our country until at least the spring.” However, he pointed to a brighter economic future, and vowed not to allow the vaccination process “to slow down without justification for bad reasons: every French person who wants to must be able to be vaccinated.”

“Hope is there in this vaccine that human ingenuity has brought about in just one year,” he said.

He also looked back on 2020, a “year in which the Government was forced to tell people how to live their lives, how long to wash their hands, how many households could meet together. And a year in which we lost too many loved ones before their time.”

“So I can imagine that there will be plenty of people who will be only too happy to say goodbye to the grimness of 2020,” he said. “But just before we do, I want to remind you that this was also the year when we rediscovered a spirit of togetherness, of community. It was the year in which we banged saucepans to celebrate the courage and self-sacrifice of our NHS staff and care home workers, a year in which working people pulled the stops out to keep the country moving in the biggest crisis we’ve faced for generations.”

About Brexit, he said, “This is an amazing moment for this country. We have our freedom in our hands, and it is up to us to make the most of it.”

Canadian prime minister Justin Trudeau spoke of the resilience Canadians showed during the pandemic, but also commented on non-Covid related challenges in 2020, saying: “We have seen acts of senseless violence that have devastating impacts on our communities. And, we have heard heartbreaking stories and calls for justice from racialized Canadians and Indigenous peoples, demanding that we act now to address racism, discrimination, and injustices in our country.”

He reminded citizens that his government had placed the most vaccine bets. “In 2021, we will continue our fight against Covid-19 with a renewed sense of hope,” he said. “Canadians have already started to receive doses of safe and effective vaccines. We have the most diverse vaccine portfolio of any country, and we continue to work with provinces and territories, and Indigenous communities and partners, to ensure that all Canadians will have free access to vaccines as soon as possible.”

President Donald Trump, who posted his video to Twitter, thanked Americans for showing “incredible grit, strength, tenacity, and resolve” in the past year. He also brought the focus back to himself, saying:

“All of the experts said, ‘Absolutely unthinkable. Trump is exaggerating. It can’t happen.’ And we did it, long before the end of the year. They said it would take a medical miracle. And that’s exactly what it is. Years from now they’ll be talking about it, they’ll be talking about this great, great thing that we did with the vaccines, a truly unprecedented amazing medical miracle.”

“Normally developing a vaccine takes up to 10 years,” Trump continued. “Thanks to Operation Warp Speed, we developed a vaccine in just nine months. We’ve already begun a nationwide vaccination program, and we’re sending the vaccine all over the world. The world will benefit will benefit, and everybody’s calling to thank me.”